When Emma Wiseman, a puppeteer living in Brooklyn, recently embarked on a new relationship, she was facing a now-common concern: What if her boyfriend was bad at texting? “You spend a lot of time in relationships now overanalyzing text messages,” she says. Thankfully, that didn’t turn out to be a problem, because he only communicates in audio messages through an app called Voxer. With audio messaging, or “voice-texting,” “you just get a sense of what’s going on. You can dispense with all of the weird added-on drama,” Wiseman says.

While it might not solve all your dating problems, audio messaging is a nice solution to the ambiguity of texts. The ability to send short voice memos rather than text was added natively to iPhones in iOS8, but third-party apps have been working on the problem of text misinterpretation for a while. WeChat’s over 500 million monthly users, many Chinese, prefer audio messages. WhatsApp includes audio as well. Voxer launched as an app in 2011, inspired by founder Tom Katis’s experiences on the battlefield in Afghanistan. In 2015, the app hit over 60 million users. It’s even on the Apple Watch.

I thought everyone hated talking on the phone. Why are we going back to using our voices? In the short time since we’ve abandoned actual phone conversations for text-based communication, whether it’s SMS or Facebook Messenger, we’ve developed a library of ways to add tone and inflection — from emoticon to emoji to stamps to GIFs. But it still seems like there’s nothing quite like actual speech. And voice messaging gives you that, with all the added benefits of asynchronous text exchanges. With Voxer, “there are no blinking gray dots,” Wiseman says, those symbols of text indecision. “I think there is an intimacy to it that reading words on a page doesn’t have, which is really nice.” 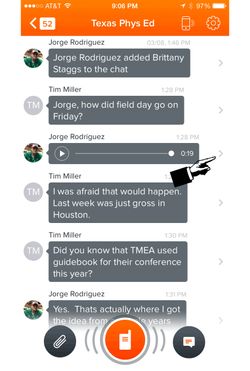 Audio messaging can be functional: “It’s faster than typing, and there’s no risk of your tone coming off the wrong way,” says Jillian Primiano, a nursing student at New York University who uses the iPhone’s audio messaging capabilities. “You also don’t have a full phone call’s span to find a different way to make an idiot of yourself.” Wiseman’s boyfriend started using the Voxer app to communicating while on his bike, keeping his hands (relatively) free.

Aside from convenience, though, the alternative communication method is amusing, a way to refresh our relationship with technology that can seem so mundane. “I started using voice-to-text because I saw a friend do it and thought it was funny,” Primiano says. “One time I was texting with a friend and I voice-messaged ‘Was he good-looking?’ knowing the people around me would hear me, as sort of like a public joke. A few people laughed, so I guess it worked.”

Podcasts are so popular — “Serial” just returned, marking the first birthday of their renaissance — that I started wondering if the audio boom had simply spilled over into text-messaging. We love podcasts so much that we want our lives to turn into them, recasting mundane daily experience into touching audio narrations. I asked Nick Quah, creator of Hot Pod, a popular podcast newsletter, if there might be a connection.

Quah wasn’t sure if audio messaging had attained the same scale as podcasting, yet. But he could see why there might be demand for these apps. “I do believe there’s a lot more hunger now that’s triggered peripherally by the recent enhanced attention on podcasting,” he says. “It’s brought to mind that audio is a uniquely mobile-oriented form.” The more we’re accustomed to Sarah Koenig speaking into our ear, perhaps the more we’ll want our friends to do the same.

The real proof of a podcast-messaging link is Rolltape, a new app that combines audio messaging with some of the trappings of “This American Life” — namely, the soft intro music that floats listeners into a reverie. Rolltape was created by a former Google employee named Jessica Taylor, who was driving to work one day and pondering how she would respond to a long email from a close friend who had just recently moved away. Getting the time to write an email seemed insurmountable, and a phone call would also have been hard to schedule. “You just get the feeling that no one’s ever reaching each other,” Taylor says.

Instead, Taylor thought about what she might do while in the car, “feeling reflective, I have some time where I’m not working or with family,” she says. Inspiration struck when she realized she could record something like her side of a phone call, and have the conversation asynchronously. The app, which limits audio messages to 5 minutes and adds the option of intro and outro music, creates a unique space for communication, different than social media or even text messaging, Taylor argues. “This could be a place where they could be real with their most trusted people. It’s not the stuff you feel at liberty to post on Facebook. What’s going on with your boss this week, what weird thing did she say to you?”

Taylor likens it to Instagram, but instead of filters there’s a frame for your speech, adding on some of the august gravity of Ira Glass. “Now anyone can create something beautiful with their voice,” she says.

Wiseman agrees that we’re getting used to listening a little harder, again. “I imagine we’re all a little more conscious of curated audio. It’s in the cultural consciousness at the moment, especially now that NPR voice has gotten so viral,” she says. “Somebody’s Voxer conversations could make a great podcast.”

Yet the popularity of audio messaging also brings back that early paradox of the return to conversation. In exchanging voice memos like we do text messages, “we’re coming in full circle, getting closer to just talking,” Wiseman adds. So maybe we should just get back on the phone?