Last night, a Facebook correspondent messaged me an alarming note: “Hey Jesse, thought you might be interested in what’s not being reported in the news. This is Dearborn, Michigan, right after the terrorist attack in California. What flags do you see flying here?” The link was to this Facebook post, a photo of what appeared to be a procession of flag-bearing people marching down a street on a gray day, though they’re mostly obscured by cars, so you can’t really tell what’s going on, with scary text reading, “This is Dearborn Michigan after the radical Islamic attack in California ! These are Isis flags and Isis supporters folks but the media has not reported because of politically correctness.” It had been shared almost 3,700 times, and I also found a tweet with the same photo that had been retweeted more than 1,300 times.

I assured the guy who had messaged me that if ISIS were openly demonstrating in Dearborn (which has one of the highest proportions of Arab-Americans in the country and which is therefore a frequent subject of unhinged rumors about Muslims), “the media” would be all over it, and that this was probably false — but that I’d look into it.

A reverse-image search on TinEye quickly revealed that this rumor’s thousands of shares on Facebook and Twitter had caught the attention of the rumor-investigating site Snopes. In a post there, Kim LaCapria concludes that, no, there was not an ISIS demonstration in Dearborn. In fact, based on the timing of the photo and a couple of other nuggets of evidence, she makes a pretty strong — albeit circumstantial — case that if the photo’s real, it’s of an anti-ISIS march that took place in Dearborn on November 27, during which Muslims gathered to raise their collective voices against the terror group.

No way — the fever-swamp internet couldn’t possibly be passing around a photo of an anti-ISIS march as a pro-ISIS march, right? Surely there has to be some boundary point in the national conversation marked with a sign reading “Rumors about Muslims this crazy and fundamentally wrong, even the most terrified and ill-informed Americans won’t believe”?

Alas, if there is a boundary, we haven’t yet found it. Some light web-sleuthing reveals that the photo is, indeed, of an anti-ISIS rally.

For someone unfamiliar with Dearborn, the only real hint as to where the photo was taken is on the right, on a sign affixed to the building with the blue roof. If you look closely, you can make out, just barely, the word microcomputer.

If you search on Google Maps for “microcomputers near dearborn,” you get a spot called Micro Computers at 15417 Warren Avenue. As for the demonstrators, a local news report noted that they gathered at the Karbalaa Islamic Center and then “walked together to nearby Ford Woods Park.” Here are the options for what that route would have looked like, according to Google Maps, given the Karbalaa Islamic Center’s listed address, with the computer shop indicated as well: 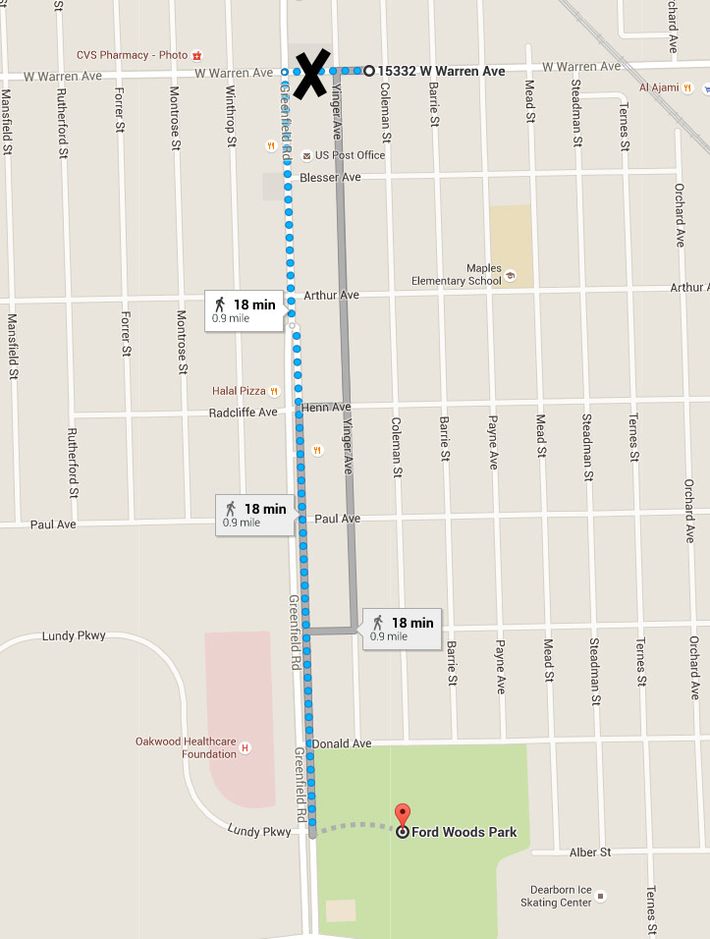 Yep, they marched right past it. And if you noodle around on Street View, you can roughly re-create the shot that’s circulating online (click this link to jump there), which was apparently taken on West Warren Avenue, looking east across Greenfield Road. 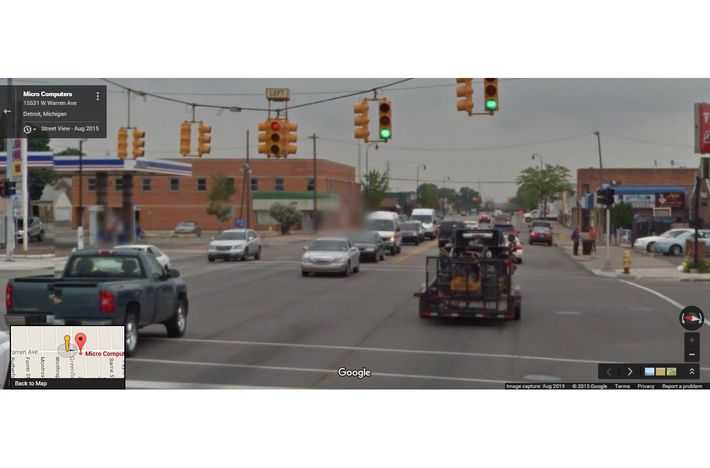 The relevant Google Maps routes has the protesters coming toward the camera and then hitching a left (or going right, from the photographer’s perspective), crossing Warren, and heading south on Greenfield, which seems to be what’s happening in the original photo.

This is what happens when the conversation about a minority group flies completely off the rails.

Dearborn Muslims Protested ISIS. And Then …