Richard Dawkins, a respected scientist and atheist, was at one time best known for coining the term meme and writing an entire book about how God is a made-up story for crazy people. Currently, he is best-known online as a popular microblogger and clock expert on the website twitter.com, and the owner of what may be the world’s thinnest skin. That fine, nearly translucent integument was on display again Monday, when Dawkins got trolled hard. Some might ask: Is a burn on Richard Dawkins really news? To which we answer: Uh, no, not really. But this is an exceptional burn.

Even though Dawkins opened himself up to needling by making his pet peeve public at book length in The God Delusion, he will occasionally carry on hopeless arguments with internet trolls, assuming they take him as seriously as he takes himself. Over the past few years, writer Virgil Texas has attempted to get Dawkins’s goat, periodically tweeting “God is real” at him, but Dawkins failed to rise to the bait — and, at some point, apparently blocked Texas. 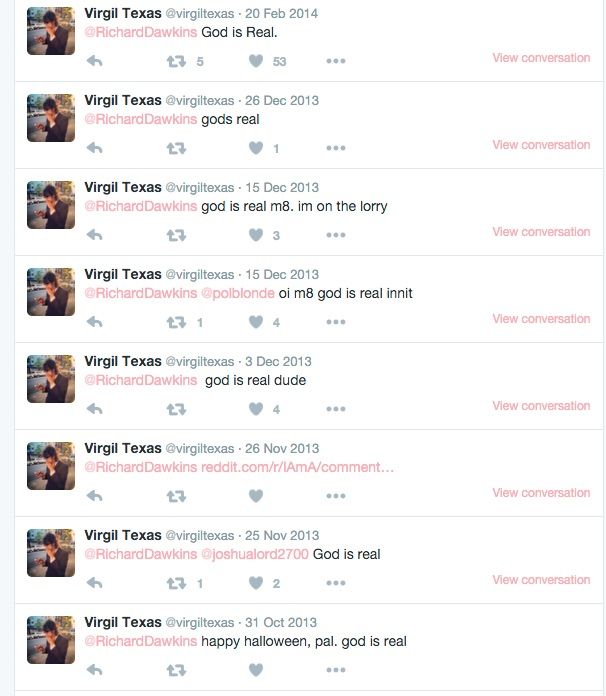 But months after it seemed like Texas had given up, he made an end run around Dawkins’s block list Monday, asking followers to please tell Dawkins to unblock him because he had a very important message to share.

Unbelievably, crazy uncle Rick obliged, curious as to what valuable message a longtime troll might impart to him. I’d wager you can already see the punch line coming, even though Dawkins couldn’t. 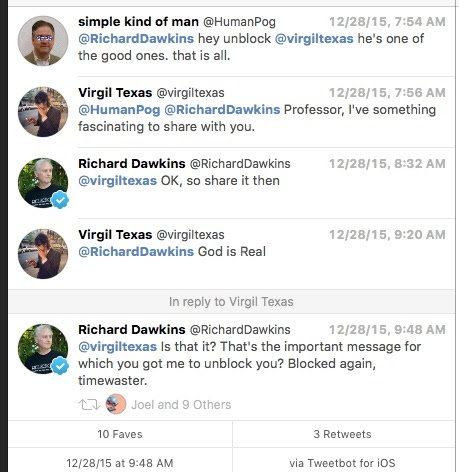 Perfect. Was it immature of Texas to keep poking at Dawkins over a period of years? Sure, but Dawkins didn’t have to respond; he had nothing to gain but humiliation. But Dawkins has proven time and again that he’s incapable of ignoring those who’d see him riled up.

In 2013, twitterers mocked Dawkins for complaining that London Heathrow Airport security had confiscated a small pot of honey from him. Rather than ignore them, Dawkins rewarded them with his time and attention, devoting an entire Guardian column to bemoaning their “puerile display of sniggering frivolity.”

The honey incident is still a very good joke to this day:

sometimes i think "maybe we should ease up on dawkins honey thing" then i remember he wrote a whole article about it pic.twitter.com/2LUbdO7a95

rip to richard dawkins. he got so angry at so many things this year that he died. here i am visiting his grave pic.twitter.com/vC9tT0T3PP

It’s fortunate that Dawkins doesn’t waste his time and effort on silly things like religion, and instead directs them to productive, non-delusional avenues like Twitter, where he’s made such great progress resolving the conflicts that plague all of humanity. If Dawkins didn’t exist, it would be necessary to invent him.