Marco Rubio and Ted Cruz ate up all of the headlines about last night’s GOP debate with all of their clashing and sparring and tangling and slamming, setting up a grand narrative arc to keep political obsessives busy through the end of the year. Which first-term senator will get the chance to jump in and rescue the Republican Party if Donald Trump drops it off the edge of the ideological spectrum in the upcoming months? And how much will they have to hate their biggest rival before the opportunity presents itself?

Down at the other end of the debate stage — no, not the main one, but the one with the four candidates with a combined polling average of about 3.4 percent — and also off the debate stage, watching the theatrics on a screen somewhere like the rest of us, is the other lesser-known and far-less-important rivalry of the 2016 presidential race. Who has the fortitude and ambition to be the least successful Republican primary candidate for the longest, Jim Gilmore or George Pataki?

Based on Gilmore’s tweets during last night’s undercard debate, he seems to have realized that his only path to the presidency is by pointing out that he at least has the same chance of being president as fellow former governor George Pataki — whom columnist Jonah Goldberg called “Jim Gilmore without the sex appeal” — regardless of how damning this argument might also be. 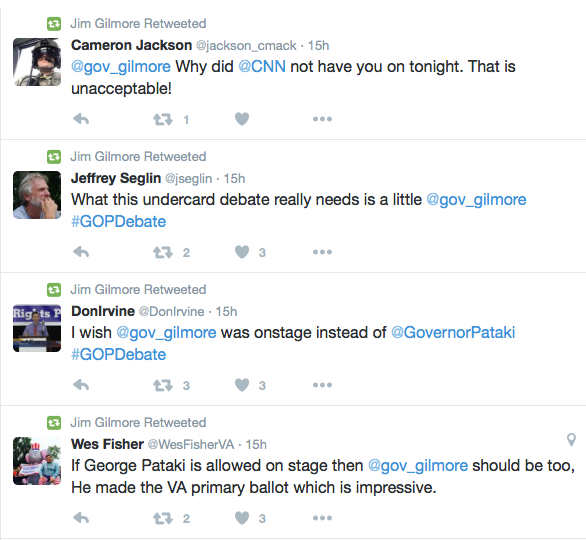 They also appear to be neck and neck in the race to convince the most people that they are actually running.

@gov_gilmore Are you still running for president?

@GovernorPataki are you still running for president?

@gov_gilmore how are you still running for president? I have friends with more of a twitter following than you

According to the latest YouGov/Economist poll, Virginian Gilmore is far more of an underground candidate than New Yorker Pataki — 60 percent of voters don’t know if they have a favorable or unfavorable opinion of him. Forty-five percent of voters say the same about Pataki.

Gilmore has already won the race to be the most invisible on the debate stage, but it remains unclear who will be the most invisible during the actual primaries. Recent reports show that both candidates have failed to get on a few ballots, thanks to missed deadlines. Pataki, who is holding a fund-raiser in San Francisco on Wednesday, told The Hill last night that he is aware of what his campaign looks like. “I’m an honest guy,” he said. “I think we could be doing a lot better.” Gilmore, on the other hand, got an unexpected break. In Massachusetts, he will appear on the top of the Republican ballot, thanks to the fact that his name was picked at random from a large golden drum on Tuesday.

The Graham spin room scrum. 30 sec earlier, half were the Pataki scrum. (Reporter behind me: "Tough break, George") pic.twitter.com/jEWAq2I4bJ

Both are also competing to get the least-depressing media attention, which may be the most intense (but not really) battle both are waging. The Augusta Free Press began its article on Gilmore’s visit to Hot Springs, Virginia, this week with the sentence “Former Virginia Gov. Jim Gilmore has moxie, or whatever it is that tells you that you’re not registering any support in your bid for president, and yet should continue pressing forward.” The Bristol Herald Courier spoke to a few supporters at the same event. One said, “I still believe in miracles.” In his remarks, Gilmore noted that he “ain’t going anywhere.” A month earlier, the New Hampshire Union Leader said Pataki says he “is not going to be taking that long walk into the sunset. ‘I have the ability to lead,’ he said. ‘I have the ability to govern. I have the leadership to bring people together across party lines. So I ain’t going anywhere.’”

But maybe there’s room in the Republican primary for two candidates who are getting no traction but are determined to fight the inevitable for as long as possible — at least for now. As the only answer to the question “What is the reason Jim Gilmore and George Pataki, both former governors, are running for president since they are zero percent in polls?” on Yahoo Answers states, maybe this is what America is all about.