In the wake of Wednesday’s massacre that left 14 dead in San Bernardino, California — the 355th mass shooting in the U.S. this year — politicians once again offered their thoughts and prayers, but didn’t offer any concrete plans to stop the killing. One journalist spent the evening on Twitter calling out the reason why, tweeting each member of Congress who #prayedforsanbernardino with the amount of money that person received from the National Rifle Association in the most recent election cycle.

Igor Volsky, of liberal blog ThinkProgress, told MSNBC there’s nothing wrong with “thoughts and prayers,” unless you’re in a position to affect gun policy and all you do about it is think and pray. He believes the NRA is paying elected officials and presidential candidates to make sure they don’t go any further.

NRA dumped $922K into McConnell's re-elect bid, so when it comes to preventing gun violence all u get is this tweet https://t.co/RsSvFRDlZr

Top 10 recipients of money from pro-gun groups in 2016: pic.twitter.com/OMHxjG9API

Got $2,000 from NRA during 2014 cycle to keep #SanBernadino victims in his prayers and little else https://t.co/IxDGYJPhHn 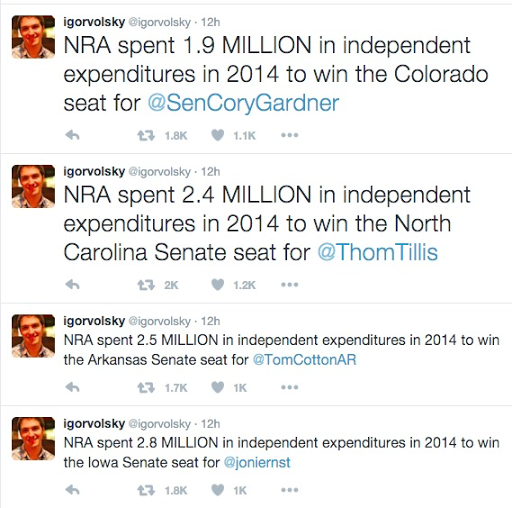 And in case you assumed that NRA-backed politicians are just doing what their constituents demand, Volsky also cited recent polls showing that 86 percent of Americans support universal background checks for gun purchasers, and that 55 percent think laws regarding the sale of firearms should be made “more strict.”

Thousands liked and retweeted Volsky’s callouts, but none of the politicians he targeted replied to his accusations. A couple of them did delete their “thoughts and prayers” tweets or block Volsky on Twitter in response, though.

Got $1,000 from NRA during the 2014 election cycle s is now "beyond words" or the ability to take any real action https://t.co/ti2HomHfgV

Your "thoughts & prayers" aren't enough, Bill, you gotta actually DO something about this. https://t.co/h0xsHqrCxi

THE FEED
11/25/2020
unhappy holidays
unhappy holidays
Why Does It Take Six Hours to Get a COVID Test in New York?
By Aaron Short
The hottest item in town may be a cotton swab that goes up the nose.
11/25/2020
countdown
countdown
Here’s What Lame-Duck Trump Might Do
By Charlotte Klein
The president could start a war, spare his convicted cronies, and more on the way out.
11/25/2020
clemency
clemency
Trump Pardons Michael Flynn in End-of-Term Attack on Russia Investigation
By Benjamin Hart
A little dose of payback from the departing president.

Prior to 2020, no ticket had ever hit 70 million.
—@Redistrict
11/24/2020
streeteries
streeteries
What Happens If Outdoor Dining Pauses in New York?
By Rachel Sugar
People need spaces to gather. Do we want to see what happens when those go away?
All
11/24/2020
education
education
The Cost of Closing NYC’s Public Schools
By Benjamin Hart and Lisa Miller
Talking through the effects of an irrational decision.
11/24/2020
crime
crime
What Happened to Quawan Charles?
By Bridget Read
A Black teen was found dead in a field. His family says he looked “like he’d been tortured.” Law enforcement still hasn’t ruled his death a homicide.