There are many benchmarks for professional success in today’s society. When have you finally, truly made it? Is it when you make your first million? Your first billion? Is it when the president name-drops you in a speech? Is it when you finally trend worldwide on Twitter? It is none of these things.

The truest mark of financial success and cultural ascendancy is when people start to believe that you are giving away your fortune in an online lottery.

At the beginning of December, Mark Zuckerberg made a huge play for the title of Hoaxiest Billionaire when he and his wife, Priscilla, announced that they would be giving 99 percent of their Facebook stock, worth roughly $45 billion, to philanthropic initiatives. For the past month, text like this has been floating around Facebook; you’ve probably seen it:

THANK YOU, MARK ZUCKERBERG, for your forward-thinking generosity! And congrats on becoming a dad!

Mark Zuckerberg has announced that he is giving away $45 billion of Facebook stock. What you may not have heard is that he plans to give 10% of it away to people like YOU and ME! All you have to do is copy and paste this message into a post IMMEDIATELY. At midnight PST, Facebook will search through the day’s posts and award 1000 people with $4.5 million EACH as a way of saying thank you for making Facebook such a powerful vehicle for connection.

This is clearly not gonna happen. But Zuckerberg’s pledge to rid himself of all those Facebook shares in some way makes it slightly less far-fetched (though still insanely far-fetched) that he would give away his fortune to average Joes.

The Legend of Zuckerberg’s Gold dates back to at least 2011, when an email scam claimed to be giving away $1 million. To collect one’s winnings, recipients had to “Simply contact your Fiduciary Agent Name - Marc Andreessen E-mail address - facebookwin2011@live.com.” Another variant asked winners to foot the bill for courier’s fees, explaining that “we can have your Facebook Claim Paper Work sent to you via our contracted Courier Service for signing and then send back to us to effect immediate release of your Winning.”

By the fall of 2011, the Better Business Bureau actually had to issue a warning about the scams, which it noted actually “carries with it many common red flags” and also possibly delivered malware to a user’s machine.

Similar hoaxes proliferated around the turn of the decade. When Apple CEO Steve Jobs passed away in 2011, rumors of a giveaway of “1,000 Limited Edition iPads” began to circulate. A few months later came rumors that Apple and Facebook had actually teamed up to just hand out technology willy-nilly. And they’re not over. Earlier this year, the Facebook page for “Eminem Ceo” promised to give away $2 million to someone who liked and shared a photo of money clearly being held by the Korean Exchange Bank.

But all of the above examples pale in comparison to the former head of Microsoft, Bill Gates, who has had to protect his fortune for about as long as the World Wide Web has been around.

Maybe you recall this recent — clearly doctored — iteration, in which a share would net you $5,000. 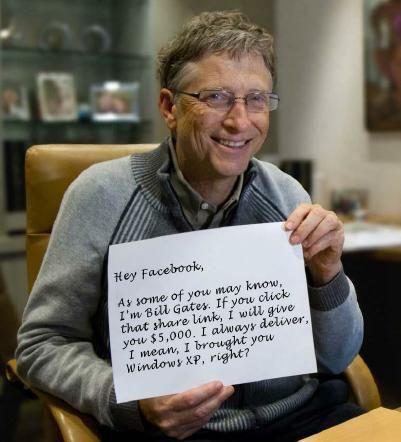 (In general, being Bill Gates is probably a waking nightmare. When I saw him at a talk in 2010, some dingus stepped up to the mic and asked Gates if he could join him wherever he would be on December 21, 2012, the date of the rumored Mayan Apocalypse.)

All of these hoaxes follow the same basic pattern: a rich person giving away their money, a chain-letter type of dissemination, and a frequent legitimization along the lines of “it was on the news, so it’s real.” A 2004 hoax archived on Snopes has the subject line “PLEEEEEEASE READ!!!! it was on the news!” In 2014, Snopes called it “quite possibly *the* oldest Internet hoax running, and still we have to post it because people keep asking about it.”

But Bill Gates is toast, replaced by Zuckerberg as our most generous pasty nerd. Zuckerberg has been aggressively gunning for the title, and he has a few big advantages. Gates famously promised to donate half of his billions to charity. That’s a large amount, to be sure, but it’s nowhere near the 99 percent that Zuckerberg dumped on the table. From a PR standpoint, no matter what the actual amounts are, 99 percent is almost double 50 percent.

Plus, Zuckerberg actually owns and is active on his communication platform, which makes people think that they can appeal to the all-seeing eye directly. Capital-H He is watching. People are more inclined to believe a Facebook contest that requires them to use Facebook, because they believe a giveaway also doubles as a thank-you. It’s also why people think that their cut-and-paste privacy notices are of some legal value.

So congratulations to Mark Zuckerberg, a real billionaire, and as of this month, our premier Hoax Billionaire as well.