Rapper DJ Khaled truly blew up online this year. His Snapchat presence is one of the best around, dispensing the major keys (🔑) to success. The Verge named him “the year’s most positive meme,” and people were enraptured this past month when he got lost on a Jet Ski.

We’ve covered Khaled before, but as Khaled would say: Another one.

On Reddit, a small community of users has congregated on r/WeTheBest (an oft-repeated Khaled phrase) to analyze his postings, figure out the keys to success, and “bless up.”

Users analyze everything from his 🔑s …

… to his interactions with Snapchat mainstay, caterer Chef Dee, who appears constantly with delicious dishes for Khaled to chow down on.

There are also daily discussion threads. Some users expressed concern over Khaled’s recent elliptical workout, which he continued to post during.

There is a lot of cocoa-butter discussion.

Khaled’s talks are highly anticipated events, as they should be.

But when he messes up, the fans let him know.

All of the comments are great. 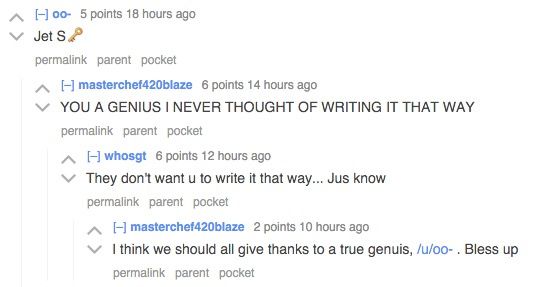 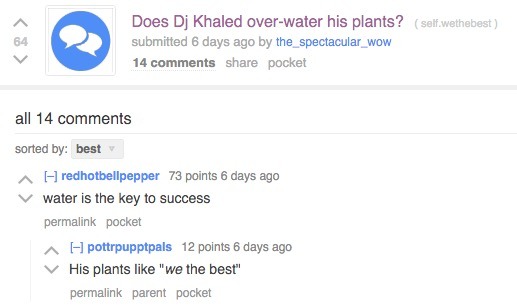 THE FEED
2/4/2023
what we know
what we know
U.S. Shoots Down China’s Balloon: Updates
By Chas Danner
“We’re gonna take care of it” President Biden told reporters earlier Saturday.
2/4/2023
early and often
early and often
The Democrat Who Could Take Down Kyrsten Sinema
By Ben Jacobs
Ruben Gallego will try to fulfill the left’s dreams by challenging Arizona’s newly independent U.S. senator.
2/3/2023
early and often
early and often
House Republicans’ Assault-Weapon Pins Aren’t Just a Taunt
By Ed Kilgore
Owning the libs may be an added bonus, but Second Amendment absolutists clearly intend them as a threat against those who challenge gun rights.