On Friday, the landlord of dead San Bernardino shooting suspects Syed Farook and Tashfeen Malik used a crowbar to pry the plywood off the front of their door; the police had blocked the entrance after doing a search and finding a dozen bombs inside. After the door was open, the dozens of reporters waiting outside stormed the place with camera crews and started filming.

What followed was about as bizarre and chaotic as you’d expect, and it ended with CNN posting this “breaking news” update on their homepage with the photo of a crib. 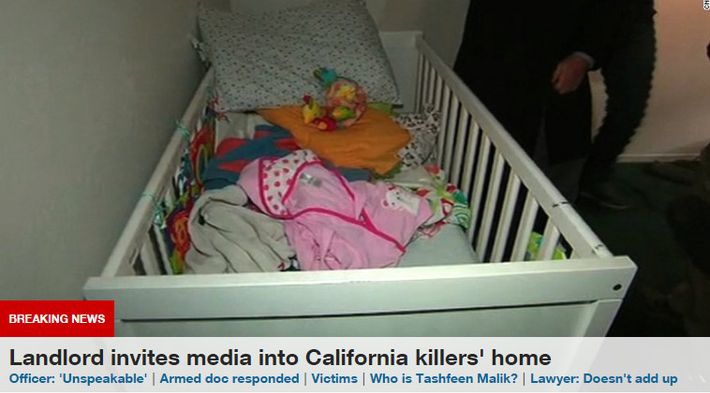 The rush to scrounge through Farook’s and Malik’s lives as quickly as possible meant that news outlets didn’t always bother blurring out the names and information on the driver’s licenses, passports, and documents being filmed live. At least one of the IDs belonged to Farook’s mother.

There were lots of images of baby toys and prayer books strewn all over the house.

MSNBC reporter is inside San Bernardino shooters' apartment, going through their baby's toys. This is bizarre/heartbreaking.

There were pictures of bathroom art.

This is above the toilet in the upstairs bathroom. pic.twitter.com/aTemzYTgAd

After a while, the neighbors started coming over to the open house. One of them looked very young.

While TV viewers were getting a surreal, slapstick inventory of a recently investigated crime scene, those who were in the middle of doing the investigating confessed that they had no idea what was going on.

A spokesperson at the FBI’s Los Angeles branch told The Guardian, “I can only tell you that the FBI finished its search. I don’t know who authorized that entry.” The San Bernardino Sheriff’s Office told the Los Angeles Times, “As far as they told us, it’s still an active investigation going on over there so I don’t know why there’s people in there.”

A reporter asked White House press secretary Josh Earnest about the strange house tour, and he told them to talk to the FBI, as the White House was “just watching it like the rest of you.”

The landlord, Doyle Miller, later told CBS News that he didn’t let the reporters in: “They rushed.” He later told the Los Angeles Times, “Yeah, I gave permission to open it up.”

He added, laughing, “It looked like a garage sale.”

The house has now been boarded back up; however, most people still seem somewhat uncertain about what the heck just happened.

And the show is over - door of #sanbernardino shooting suspects' home now boarded up again. Strange goings-on. pic.twitter.com/mSZ7lhX78C