It’s entirely possible that today, on the eve of a new Star Wars film, you are tired of reading about Star Wars online. The new movie, The Force Awakens, dominates the Trending Topics and Recommended Videos that make up the 2015 web’s well-oiled content recirculation machine; any publication with access and information has a large and resource-rich internet presence. But this was not always the case.

In 1999, when The Phantom Menace premiered, only 36 percent of people used the internet. That number stands at 84 percent today. Gathering online to talk about Star Wars was still relatively novel back at the turn of the century, and was dominated by fan sites and message boards, not well-funded start-ups and well-known media organizations. Many of the sites that dominated the Star Wars anticipation machine have either gone dark or moved on. Still, plumbing the depths of the Internet Archive reveals tons of good stuff.

One of the earliest, still-running fan sites is theforce.net, which was initially called the Star Wars Page at Texas A & M. Old versions of it online are mostly broken now, but the earliest version points out that the site is “best viewed at a desktop area of 800x600 pixels.”

On November 15, 1997, site admin Chris Kivlehan posted an editorial (this was before blogging software) called “Six Episodes or Nine Episodes?”

If you asked me what I think the answer behind all this is, I’d say George Lucas may have developed more about the sequel trilogy then he is letting on, but he may be unsure whether he’d actually want to commit another nine years of his life to Star Wars. George Lucas has always been considerate of his fans–his tolerance of web sites like ours is just one example–perhaps he doesn’t want to raise our hopes on a project he may elect not to make.

I’m just some twenty one year-old with a web site who occassionally [sic] hears from people involved in the production of Episode I, but here’s my advice to fellow Star Wars fans: nevermind the sequels, focus on the prequels or those three wonderful films that you can pop into your VCR whenever you want. Right now we have six incredible hours of that galaxy far, far away with six more on the way. Let’s focus our Star Wars-related energies on those episodes rather than on questions the Jedi Master himself may not truly know the answer to.

There were also, ahead of user-generated content sites like Wikipedia and Archive of Our Own, pages dedicated to an encyclopedic breakdown of vehicles and technical aspects of the series, as well as a robust fan-fiction section.

When Geocities went the way of the dodo, many early fan sites vanished along with it, though early snapshots still exist on outmoded services like Webring, which let people establish ad hoc website networks.

One of the best ones that I discovered is Sycamore Star Wars Place, which contains broken links to desktop themes and screensavers, email lists (so far, none of my attempts to subscribe have gone through), and a list of mythological references in the films (“Yes, Star Wars is a great story, fun, exciting … but it’s also crammed full of all sorts of mythological motifs.”)

At least one index page for an email list called the Pod Race Reporter has survived, though the actual content of these emails has not been archived. Some things about the web haven’t changed that much, as indicated in a March 1999 email titled, “ FLASH! Star Wars trailer South-Parked!” 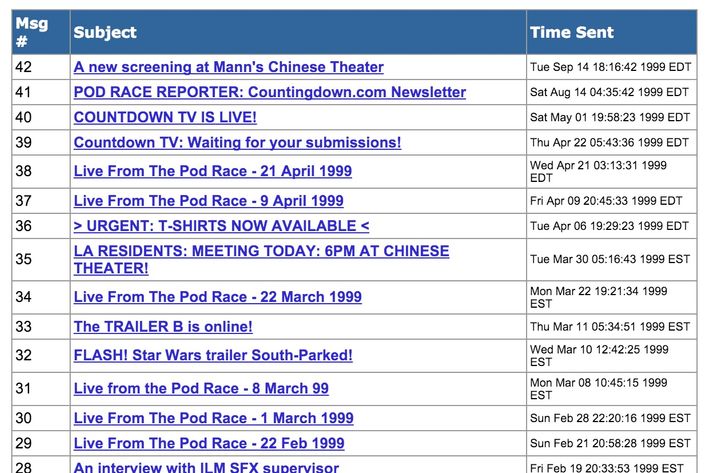 The website countingdown.com was established, according to a 2002 writeup in Slate, as a way to harness intense fandom. “Sponsoring lines in Los Angeles, New York, and San Francisco, then, [the site’s creators] used the Countingdown.com Web site to promote the lines, leak Episode I-related information, and host live Web broadcasts from the Hollywood line.” In 1999, the three-week-long line-waiting effort brought in “30,000,000 streams of video to Web users, and raised a total of $75,000 for the Starlight Children’s Foundation.”

Archives of the site’s news section around the time of the launch of The Phantom Menace show frantic and obsessive updates that are now commonplace. 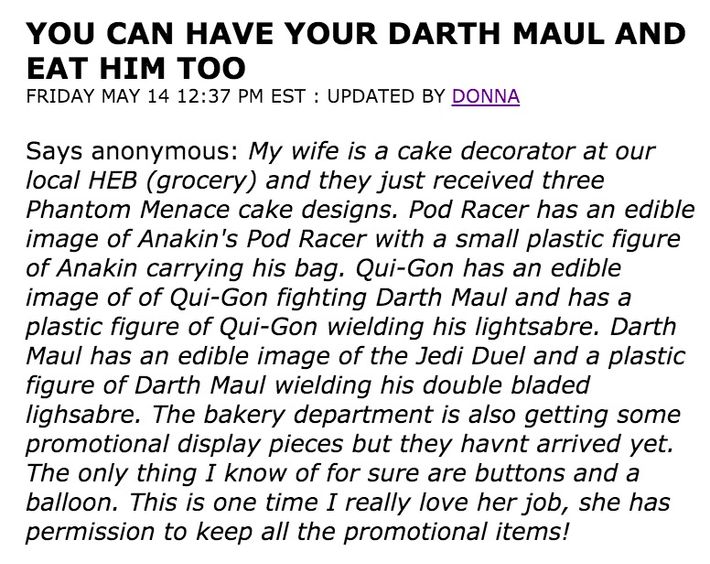 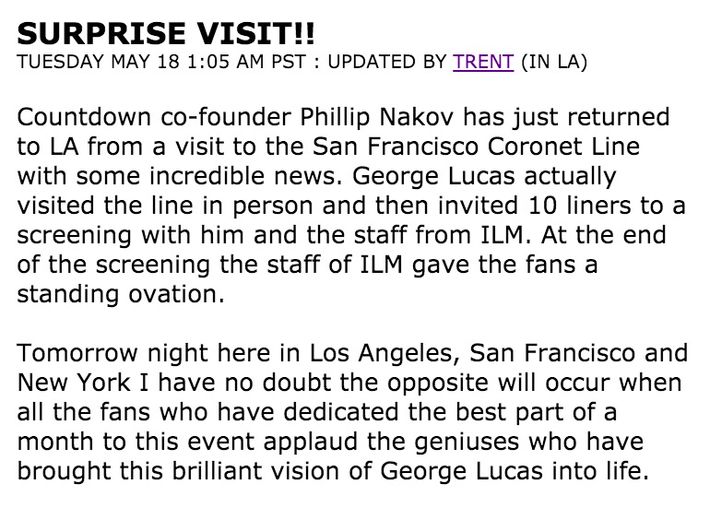 And who could forget Star Wars’ humble beginnings at the forefront of viral content, the Star Wars Rap. An at-the-time-impressive Flash animation that asked, “What if Darth Vader … rapped?” Over on Scott’s Star Wars Message Board, known as the Cantina, a 2001 thread entitled “Star Wars Gangsta Rap!!! LOL, you gotta see this!!” implores users to head over to atomfilms.com.

The official Star Wars website celebrated the rap’s accolades back in 2002. The post, for some reason, no longer exists on the franchise’s official site. 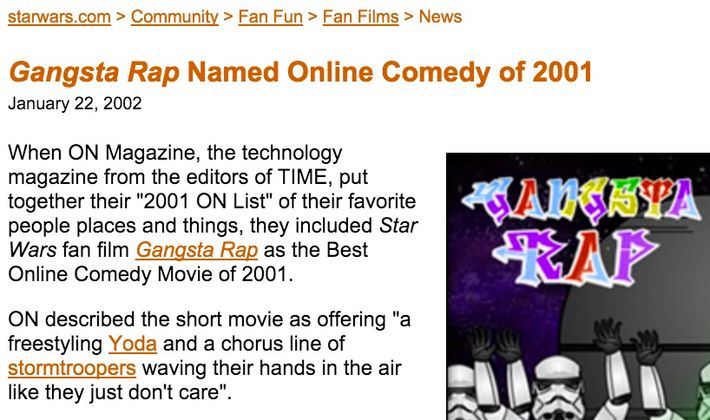 THE FEED
8:00 a.m.
the money game
the money game
The Rise and Fall of Wall Street’s Most Controversial Investor
By Jen Wieczner
Cathie Wood built a thriving brand out of price-prediction porn — then the tech bubble popped.
5/25/2022
what we know
what we know
Gunman Kills at Least 19 Children and Two Teachers at Texas Elementary School
By Intelligencer Staff
The deadliest massacre of its kind since Sandy Hook.
5/25/2022
the national interest
the national interest
The Conservative Playbook for Deflecting Anger After Mass Shootings
By Jonathan Chait
Ignoring the obvious connection between gun deaths and lax gun laws in three easy steps.

5/25/2022
texas school shooting
texas school shooting
Beto O’Rourke Confronts Greg Abbott Over Shooting: ‘This Is on You!’
By Matt Stieb
The Democratic candidate for governor interrupted a press conference about the elementary-school shooting before he was pulled away by security.
5/25/2022
early and often
early and often
2022 Midterms: A Guide to the Races Worth Watching
By Ed Kilgore
A cheat sheet to keep track of all the crucial races, primary upsets, and campaign drama — Trump-fueled and otherwise — from now through Election Day.
5/25/2022
early and often
early and often
The Bush Political Dynasty Ends With a Whimper
By Ed Kilgore
The once-dazzling George P. Bush lost badly to Trump-backed Attorney General Ken Paxton, whom he called a “philandering felon.”
5/25/2022
gun violence
gun violence
Why We Keep Letting This Happen
By Ross Barkan
A non-exhaustive list includes the filibuster, radical red states, the archconservative Supreme Court, and a toxic national tradition.
5/25/2022
early and often
early and often
Trump Dumped Mo Brooks. He Made the Senate Runoff Anyway.
By Ed Kilgore
The January 6 speaker survived Trump’s ludicrous “woke” accusation and will face Katie Britt in next month’s Alabama GOP Senate runoff.
5/25/2022
early and often
early and often
The Devil Went Down to Georgia and Lost
By Ed Kilgore
Trump spent the past two years working to exile Brian Kemp and Brad Raffensperger from the GOP, but he couldn’t do it.
5/25/2022
early and often
early and often
President Mike Pence Would Be Worse Than Trump
By Ross Barkan
The former vice-president is attempting to bolster his chances in 2024, but Democrats would be wise to beware any attempt to rehabilitate his image.
5/25/2022
foreign affairs
foreign affairs
The American Running Rescue Missions in Ukraine
By Rachel Nostrant
Kathy Stickel has pulled dozens of people out of harm’s way by putting herself in it.
5/25/2022
plagued
plagued
Welcome to the Next COVID Wave
By Chas Danner
The new wave fueled by the BA.2.12.1 subvariant might not be as big or bad as the last one, but there are still plenty of ways it can go wrong.
5/24/2022
2022 midterms
2022 midterms
Republicans May Have Sabotaged Their Best Chance to Beat Whitmer
By Matt Stieb
Five GOP candidates for governor in Michigan — including the top two contenders — faked signatures to get their names on the ballot.
5/24/2022
adam neumann
adam neumann
Adam Neumann’s New Business Plan
By Kevin T. Dugan
The former WeWork CEO wants to get rich(er) by helping corporations appear more environmentally sustainable than they really are.
5/24/2022
partygate
partygate
Millionth Boris Johnson Pandemic Party Exposed
By Benjamin Hart
Will this be the one that forces his resignation? Nah, probably not.
5/24/2022
early and often
early and often
Perdue Ends Flailing Campaign With Racist Remarks About Stacey Abrams
By Ed Kilgore
The former senator capped off his Trump-inspired challenge to Governor Brian Kemp by accusing the Democrat of “demeaning her own race.”
5/24/2022
games
games
The Most Disturbing Part of the Yankees’ ‘Jackie’ Incident Was the Fans
By Will Leitch
Yankee Stadium picking up Josh Donaldson’s taunt was another example of crowd dynamics gone haywire.
5/24/2022
vision 2024
vision 2024
Democrats Quietly Search for an Alternative to Biden in 2024
By Gabriel Debenedetti
Inside the 2024 soul-searching that’s happening in every corner of the Democratic Party — except the White House.
5/23/2022
new york
new york
Sean Patrick Maloney Is Getting Primaried After Ticking Off Democrats
By Matt Stieb
Progressive state senator Alessandra Biaggi is expected to challenge Maloney after he ditched his own seat to run in a less competitive district.
5/23/2022
politics
politics
House Ethics Committee Investigates Madison Cawthorn for Promoting Crypto
By Matt Stieb
Cawthorn is leaving in January, but he may be in trouble before then.
5/23/2022
life after roe
life after roe
Nancy Pelosi Communion Ban Is a Challenge to Pope Francis
By Ed Kilgore
The Vatican opposes the weaponization of Communion and stopped bishops from barring President Biden. Will Francis intervene on Pelosi’s behalf?
5/23/2022
just checking in
just checking in
So What Is Rudy Giuliani Up to These Days?
By Margaret Hartmann
Trump’s former attorney has been keeping busy by dealing with January 6–related legal woes, making weird videos, and arguing with parade hecklers.
5/23/2022
plagued
plagued
The COVID Vaccine News Many Parents Have Been Waiting For
By Matt Stieb
Pfizer has finally filed for FDA approval for a three-dose COVID vaccine for kids under the age of 5.
5/23/2022
foreign interests
foreign interests
Biden Says U.S. Will Defend Taiwan Against China — or Maybe Not
By Chas Danner
The president’s comment indicated an aggressive change in policy. The White House quickly walked it back.
5/23/2022
religion
religion
Southern Baptists Hit by Bombshell Report on Sexual Abuse
By Ed Kilgore
The ever more conservative leadership of America’s largest Protestant denomination gets a wake-up call about its own sins.