This Christmas, some parents just wanted to give their kids a toy plane that rolls along the ground and changes directions when it bumps into things, playing music and fighter-jet sounds as it goes. But when they unwrapped and assembled their F16s, they found that the toy symbols of U.S. military might didn’t make jet-engine sounds — they played “a Muslim prayer spoken during pilgrimages to Mecca.” Well, that’s slightly awkward.

The mix-up made the news in Washington State, and Amazon reviews of the WolVol Bump & Go Action Electric F16 Military Fighter Jet Aircraft Airplane Toy with Lights and Sounds confirm it wasn’t an isolated incident.

Some of the reviews are clearly jokes written by people who don’t own the toy. 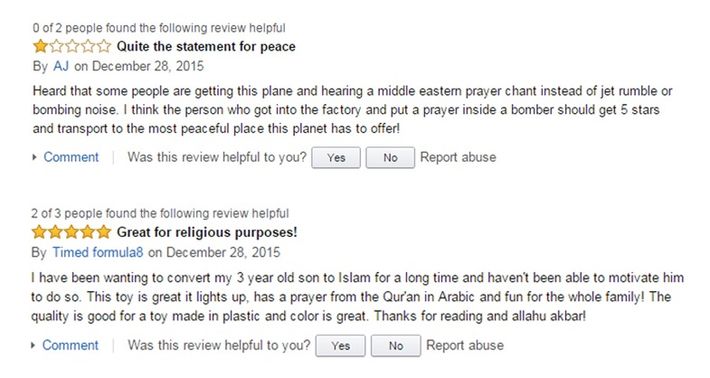 But others are from dissatisfied purchasers who describe the prayer in Arabic as “weird and scary,” “un-American,” “bizarre,” “annoying,” and “creepy.” In Donald Trump’s America, I guess we should just be thankful that no one called the defective plane a “terrorist” toy.

And, to be fair, practicing Muslims aren’t especially thrilled about a prayer coming out of a toy fighter jet, either.

One Amazon reviewer suggested the unexpected change in sound effects might have been intentional sabotage, a clever political commentary by someone with access to a toy factory. Hilarious and amazing if true, but there’s probably a simpler explanation.

Judging by the negative reviews, it doesn’t sound like the quality control for a toy brand you’ve never heard of was all that stringent — shocking, I know! Even the planes that played the right sounds reportedly came apart easily.

We’ll probably never know for sure how this happened — the company behind the toy, Brooklyn-based Wolvol, doesn’t seem to have a working website anymore, and the plane is only available on Amazon through third-party sellers.

THE FEED
4 mins ago
poll position
poll position
Biden Is Trump (When It Comes to Popularity)
By Ed Kilgore
Biden hopes tonight’s State of the Union address will sway voters, but there’s growing evidence that opinions of any president are hard to move.
10:29 a.m.
early and often
early and often
Trump Wants to Divide Republicans and Conquer DeSantis
By Ed Kilgore
Nikki Haley is no threat to Trump, who would prefer a large field to muddy the track in his real primary race against Florida‘s governor.
9:12 a.m.
what we know
what we know
Horrifying Scenes of Quake Damage From Turkey, Syria Emerge
By Chas Danner
The powerful earthquakes have flattened thousands of buildings in the region, and the death toll continues to mount.