On Friday morning, cable-news personnel descended en masse on the townhouse of deceased San Bernardino mass shooting suspects Tashfeen Malik and Syed Rizwan Farook, reporters eagerly waiting for the landlord to let them in so they could deliver an exclusive to the hungry public. But the public — at least the segment on Twitter — didn’t want it. In fact, the public was appalled.

But did brave Twitter media critics turn off their TV sets in disgust? No. They live-tweeted every minute of the utter clusterfuck.

MSNBC, moving first, sent Kerry Sanders into the shooters’ closet — proudly trumpeting the move on Twitter, perhaps not aware of how people were going to react.

This is what rock bottom of journalism looks like #SanBernadino pic.twitter.com/gzS6zPZBxb

Viewers immediately wanted to know “WTF” he was doing in there, rummaging through what was presumably still the site of an active investigation: 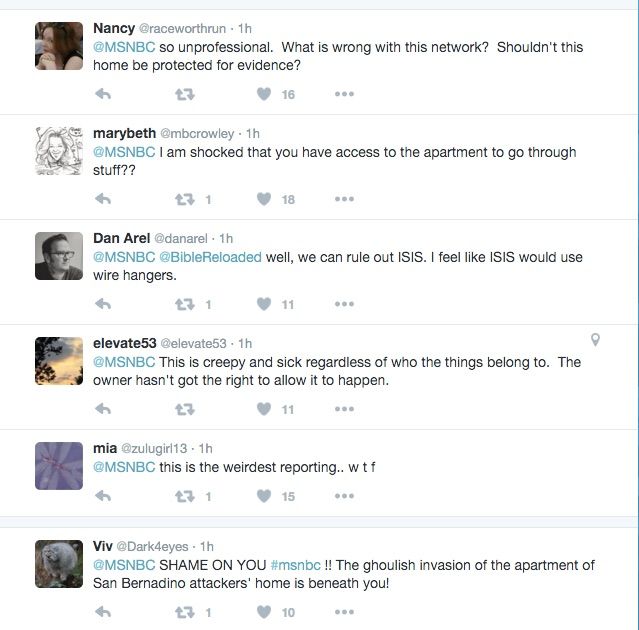 Those watching were particularly shocked to see ID cards, including one apparently belonging to Farook’s mother, displayed for the MSNBC cameras with no information blurred out. Those calling out the network made sure to censor their screenshots:

Screenshots from MSNBC. I added the redout pic.twitter.com/Ttu3zJ0Fjj

CNN’s Victor Blackwell followed, and received the same shocked reaction from his audience: 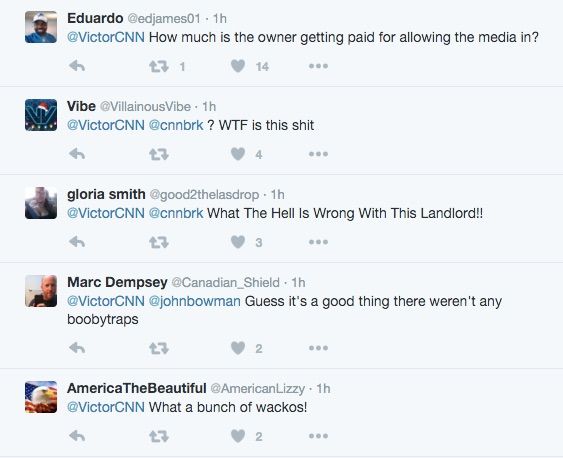 Blackwell had initially tweeted photos from inside the suspects’ home, but later deleted them and reported that the door had been boarded back up — by private citizens, he made sure to note, not by the authorities.

Door to home of #SanBernardino shooters now sealed again by private citizens - not by local police or FBI. pic.twitter.com/z48EgPTAlV

Many on Twitter noted parallels between the cable channels and someone else who creepily invaded a home with a camera: Jake Gyllenhaal’s character in Nightcrawler. It didn’t take long for the comparison to become a meme: 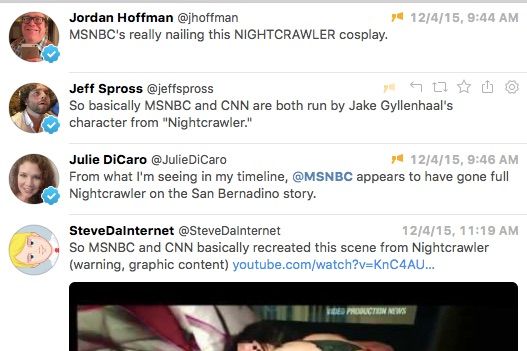 Things got even worse when a reporter was seen coming out of the building with what appeared to be a Popsicle.

They literally found, displayed and analyzed a popsicle - appeared to be cherry https://t.co/kX01tOWD3V https://t.co/8rh5ouMssW

Someone stole a popsicle it's like a SNL skit already pic.twitter.com/k6RhIKhXvq

But the reporter, Toby Harnden of the Sunday Times of London, later clarified that he hadn’t stolen any frozen goodies from the scene. He was just handing an upside-down screwdriver to the landlord, who was trying to open the boarded-up door.

This is me. It's a screwdriver, not a popsicle. I was helping landlord, who was right beside me, take off the board. https://t.co/DpL0BHYbQn

And speaking of that landlord: Along with the outrage and the memes came questions about how the cable-news outlets were allowed into the building in the first place.

CNN reported that the property owner, one Doyle Miller, had let reporters in by prying open the boarded-up door with a crowbar, and Anderson Cooper had an expert on to justify the invasion, speculating that “had this not been a released scene, there would have been a larger police presence.”

But that seemed strange to some, because there was a list of seized materials still sitting inside the apartment: