Teen heartthrob magazine Tiger Beat’s very first social-media issue hit stands today. “You crammed our feeds with requests for an entire issue devoted to social media stars, so here you go!” is how the front-of-the-book note from editor-in-chief Leesa Coble puts it. What follows is 90 full-color pages of young, fresh-faced, tech-savvy (and mostly white) digital natives.

As an ancient, 24-year-old millennial, I picked up a copy, hoping to gather some secrets so that I wouldn’t get Logan’s Run’d off of Vine next year. What follows is what I learned.

Look at all these fun facts! 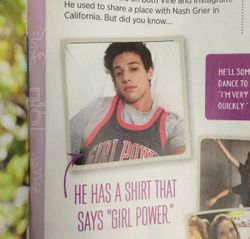 One section of the magazine is How-To’s. How to be a Vine star, how to build a YouTube channel, etc. Nearly every single piece of advice falls into one of two categories: very specific media-oriented tactics, or upbeat teen platitudes.

Most important on the platitude side is to “BE YOURSELF!” When it comes to YouTube, “This is the hardest part, you just need to start!” As one YouTuber says, “I don’t write scripts, I just sit down in front of my camera and talk about stuff!”

Of course, while being yourself, you need to also make sure that you come up with a content schedule, jump on trending topics, and focus test content to make sure it has viral potential. (Nothing says Tiger Beat teen hunk like “content schedule.”) The advice sounds, frankly, like the SEO and social seminars nearly every major publication media publication puts on for its staff; for people like me more familiar with the media landscape of five or ten years ago, the strategies of “form brand sponsorships” and “just wing it” seem diametrically opposed. But this may be why I am not a YouTube star!

This might have been the most fascinating aspect of the issue to me — someone who is aware of teen social-media celebrity without being an active consumer of it. Its subjects are surprisingly frank about the Capital-B Business of being an online star and, at the same time, you know: adolescent.

Fascinatingly enough, most of the social-media stars view the platforms where they’ve gotten their starts as launchpads … straight into old media. Most have aspirations of signing a record deal or acting in TV and film. For all of the talk of new media’s ascendancy, and its disruption of the old-media stranglehold, it’s clear that for its stars, YouTube is considered a means, not an end.

The next section, “2015 by the Numbers,” is all about recapping the year in social media. Maybe you’ll enjoy the biggest celebrity Twitter fights of the year. Or maybe:

Maybe you remember Meme Mania. Memes are finally cool in 2015, and these were the biggest ones. 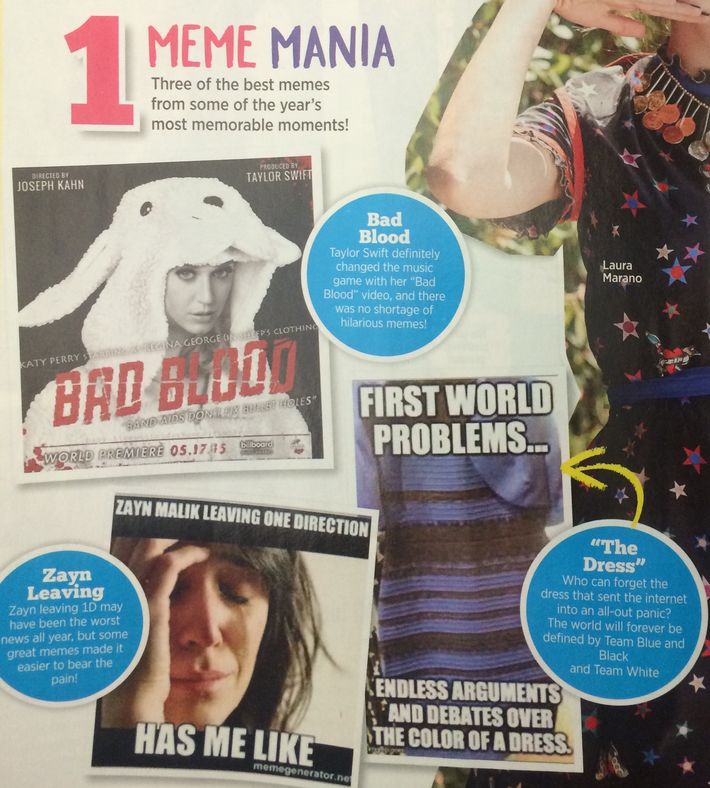 Lastly, there’s an activity section. This is where teen girls (and, uh, me) find out whether we’re “selfie crazy,” and which emoji describes our destiny. Here’s what I learned: 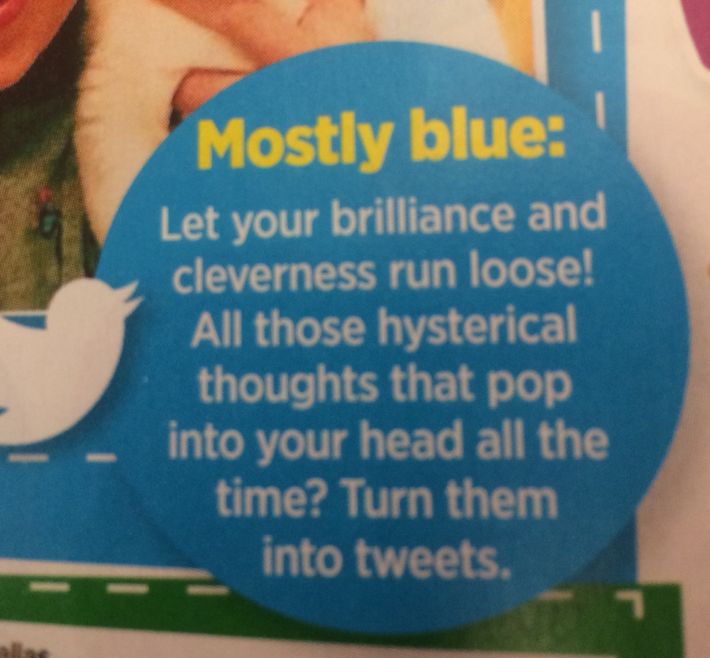 Way ahead of you, Tiger Beat!

THE FEED
15 mins ago
life after roe
life after roe
No, Trump, God Didn’t Overturn Roe v. Wade
By Ed Kilgore
The 45th president has a habit of blasphemously confusing himself with the Almighty, despite his religious illiteracy.
23 mins ago
life after roe
life after roe
Overturning Roe Is Just The Beginning
By Claire Lampen
Conservatives are already floating a national abortion ban and the overthrow of other privacy-based rights.
6:02 p.m.
public health
public health
New York’s Belated Monkeypox Vaccine Drive Is a ‘Recipe for Disaster‘
By James D. Walsh
The city just had 1,000 doses and only began administering them to residents two days before Pride.

3:54 p.m.
life after roe
life after roe
Outrage, Uncertainty, and Instant Abortion Bans After Roe v. Wade Overturned
By Intelligencer Staff
Some Republican leaders are already calling for a nationwide ban, while protestors assemble outside the Supreme Court to express their outrage.
3:47 p.m.
abortion
abortion
The Dissenters Say You’re Not Hysterical
By Irin Carmon
“The majority tells everyone not to worry,” the dissenting justices write. But they’re ringing the alarm.
3:21 p.m.
life after roe
life after roe
John Roberts Had a Vague Plan to Only Half-Kill Abortion Rights
By Ed Kilgore
The chief justice said he preferred a “more measured course” in his Dobbs concurrence. His new standard would have allowed most abortion bans anyway.
2:31 p.m.
life after roe
life after roe
The End of Abortion Rights Is Trump’s Big Payback
By Ankush Khardori
He promised Republicans a Court conservative enough to overturn Roe so long as they tolerated his corruption and criminality. It worked.
2:00 p.m.
the national interest
the national interest
Now We See What Happens When Social Conservatives Take the Wheel
By Jonathan Chait
The Christian right’s power finally becomes real.
1:08 p.m.
abortion
abortion
The End of Abortion As We Knew It
By Irin Carmon
In a 6–3 decision, the Supreme Court has ruled to overturn Roe v. Wade.
11:23 a.m.
life after roe
life after roe
Clarence Thomas Threatens Contraception, LGBTQ+ Rights Could Be Next to Go
By Ed Kilgore
In his concurrence to the Dobbs decision ending the right to an abortion, Justice Thomas said the Court should “reconsider” other precedents too.
11:16 a.m.
life after roe
life after roe
‘A Woman Has No Rights’: Read Liberals’ Supreme Court Abortion Dissent
By Nia Prater
Justices Breyer, Sotomayor, and Kagan decried the abolition of Roe v. Wade in blistering language.
7:55 a.m.
the inside game
the inside game
How 4 Senators Finally Got Bipartisan Gun Control Done
By Gabriel Debenedetti
“I’m so sick of thoughts and prayers.”
6/23/2022
early and often
early and often
How Trump Found the One Justice Department Lawyer Willing to Steal the Election
By Ed Kilgore
Testimony of top officials showed how far the president was willing to go to get the department illegally involved in his coup.
6/23/2022
early and often
early and often
The Supreme Court Gun Ruling Could Lead to More Violence
By Matt Stieb and James D. Walsh
Experts and research say that looser regulation of concealed carry is correlated with higher gun-homicide rates.
6/23/2022
early and often
early and often
Is That Sean Penn at the January 6 Hearing?
By Margaret Hartmann
The noted thespian and journalist showed up for some reason.
6/23/2022
politics
politics
Authorities Raid Home of Jeffrey Clark, Trump DOJ Official
By Nia Prater
He played a key role in former president Trump’s attempt to overturn the results of the 2020 election.
6/23/2022
2022 midterms
2022 midterms
California’s Law and Order Narrative Didn’t Survive Late Returns
By Ed Kilgore
Rick Caruso is not the world-beater he seemed to be two weeks ago.
6/23/2022
early and often
early and often
The Supreme Court Has Endangered the Future of Gun Control
By Jay Michaelson
Background checks, age limits — anything that wasn’t around in the 1700s is probably unconstitutional, according to Clarence Thomas.
6/23/2022
early and often
early and often
The Wildest Revelations From the January 6 Committee
By Margaret Hartmann
Public hearings and press reports have revealed plenty, from Ginni Thomas’s emails to Ivanka disagreeing with dad to Trump’s remarks on hanging Pence.
6/23/2022
vices
vices
FDA Orders Juul to Stop Selling in the U.S.
By Benjamin Hart
The Biden administration has dropped the hammer on a once-hot vaping brand. And it’s going after the nicotine in cigarettes, too.
6/23/2022
the national interest
the national interest
Why Ron DeSantis Can Beat Trump in 2024
By Jonathan Chait
The party is deciding, and the voters are getting the message.
6/23/2022
profile
profile
Mark Manson, the Self-Help Guru Who Burned Out
By Benjamin Wallace
He sold 12 million copies of The Subtle Art of Not Giving a Fuck. Then he started taking his own advice.
6/22/2022
the money game
the money game
Joe Biden, Oil Man
By Kevin T. Dugan
The president’s call for a summer gas-tax holiday is another pro-oil policy that wouldn’t do much to help people.
6/22/2022
the picket line
the picket line
The National Labor Relations Board Takes On Starbucks
By Sarah Jones
Federal labor regulators are seeking a broad court order against the chain for its anti-union push.
6/22/2022
explainer
explainer
Trump’s Long Campaign to Steal the Presidency: A Timeline
By Ed Kilgore
The insurrection wasn’t a one-day event. It was the culmination of a multifaceted, yearslong plot — and it isn’t over.