Where’s Waldo? (Where’s Wally? if you’re nasty), a visual hunt for a fugitive in pajamas, is a torture passed down from parents to children for generations, tolerable only because of the promise that Waldo is real, and that if you scour every inch of a page, you will find him. But what if Waldo were just a myth, an unsteady crutch propping up our already-loose relationship with sanity? One man dared to give us a glimpse of that nightmare, through a viral tweet darkly. Waldo is dead — long live Waldo.

My Christmas gift to the internet is these Where's Waldo pictures with Waldo photoshopped out pic.twitter.com/PIo88oMFn1

And lest you think Waldo and his illustrated scavenger-hunt ilk are for children only, consider this image by the Hungarian artist Dudolf, which asks the viewer to locate a mostly white panda in a field of mostly-white snowmen. It’s been shared nearly 120,000 times on Facebook.

There's a panda amongst them!Can you find it?

Now, consider it with no panda. A snow-blind nightmare from which there is no waking. 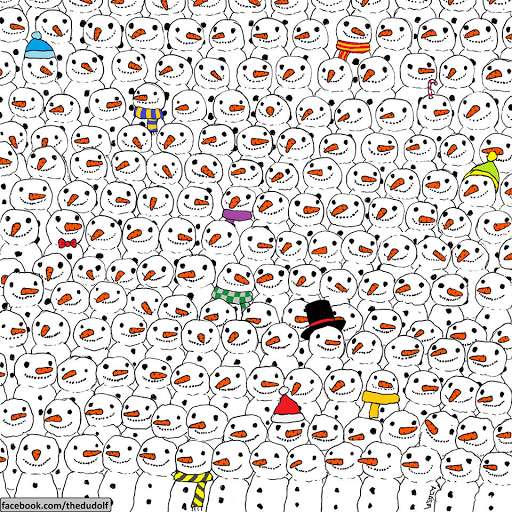 This Christmas, give your friends and loved ones the gift of questioning whether they might be crazy. They’ll thank you.

I mean, they won’t, but still.

Where’s Waldo? Minus Waldo Will Drive You Insane