If, as they say, “the Party Decides” on its presidential nominee, perhaps the second-biggest curiosity of the Republican presidential race — next to the persistent strength of you-know-who — is why the party hasn’t decided on Marco Rubio. Or, if the party has decided on Rubio, why hasn’t the weight of this decision been brought to bear upon the electorate? The two other candidates expected to challenge Rubio for Establishment support, Scott Walker and Jeb Bush, have, respectively, dropped out of the race and suffered an endless series of humiliations amid terminal decline. The door for Rubio is wide open, yet he has not walked through it.

What makes the situation so curious is that Rubio’s attraction for the party elite is glaringly obvious. He is good-looking, smart, a member of a vital and growing ethnic bloc the party desperately needs, and hails from the most electorally important state in the union. Rubio is the perfect vessel for the Republican Party agenda. He is a completely faithful advocate of the consensus party agenda of reducing taxes for the affluent, deregulating finance and the fossil-fuel industry, repealing Obamacare, appointing trusted conservatives to the judiciary, and carrying out neoconservative foreign policy. He performs well on television, and melts the hearts of Republican billionaires, from Paul Singer to the Kochs to Sheldon Adelson. He has presented a narrow target to the national media — notably, in its spoof of the Republican debate, Saturday Night Live’s take on Rubio was gentle, mocking him only for being young and attractive.

If Republican scientists were revealed to have built a cyborg designed to win the presidency, everybody would immediately suspect it was Rubio. His failure to draw first-rank polling numbers has become an important campaign mystery.

Theory No. 1: He’s too lazy. Reporters at the Washington Post and National Review have sussed out the interesting fact that Rubio is spending less time than other candidates pressing the flesh in early primary states. This has become the single most popular explanation for Rubio’s failure to launch: He is running a national campaign rather than a sequential primary-based campaign. And, indeed, it is odd that the Republican scientists who programmed Rubio forgot to install a “campaign in Iowa and New Hampshire” function.

The flaw here is that Rubio is doing slightly better in the early states than he is nationally. According to the aggregation at HuffPost Pollster, Rubio is currently drawing an average of 10.7 percent in the national polls:

And in New Hampshire, he is drawing 13.8 percent:

Maybe he ought to be spending more time in Iowa and New Hampshire, but this does not appear to be the cause of his problem.

Theory No. 2: He’s in too much of a hurry. This is close to the opposite of Theory No. 1. Matthew Yglesias has argued that Rubio may have alienated fellow Republicans by elbowing his seniors out of the way in order to boost his own profile. Yglesias cites Rubio running against Charlie Crist for governor, then against Jeb Bush for president, then supporting immigration reform before turning against it.

The trouble is that, in all these cases, Rubio was operating in his party’s best interest as well as his own. By deposing Crist, he gave Republicans a more reliable partisan Senate vote without putting a seat at risk. By supporting immigration reform, he risked his own standing among the party base to patch up a gaping demographic weakness (and then he denounced his own bill so he could live to fight another day). The number of Republicans in Congress who wanted Rubio’s bill to pass surely exceeded the number who openly supported it. And running against Bush gave the GOP Establishment a chance to run a candidate who held Bushian views on policy but was unweighted by the poisonous branding of the Bush name — which is why Yglesias himself argued for Bush to drop out for the party’s good.

Theory No. 3: Republicans know something bad about Rubio. The Bush campaign has claimed that, when Mitt Romney’s campaign vetted Rubio in 2012, it found something in his background that made them hesitate to put him on the ticket. “Those who have looked into Marco’s background in the past have been concerned with what they have found,” a leaked document claims. The Bush campaign is also reportedly spreading allegations of financial impropriety and infidelity.

It is impossible to know whether the allegations have any merit (no public evidence has come to light) or whether Republicans believe them. In any case, if they are worried, it hasn’t done much to stop Republican insiders from supporting Rubio, who has gained endorsements in recent weeks.

Theory No. 4: Immigration reform has doomed him. Rubio’s erstwhile support for bipartisan immigration reform may well prove to be a major liability in the race. But there’s little reason to believe the issue has harmed him so far. Remarkably, Rubio’s bipartisan bill did not come up in any of the first four presidential debates. When it finally arose in the last debate, Rubio effectively turned it against his main rival, Ted Cruz, and managed at least to salvage a draw, or possibly even a win.

A Quinnipiac poll earlier this month asked Republican voters which candidate or candidates they would definitely never support. Only 5 percent of voters said they would never support Rubio — the lowest total of any candidate. 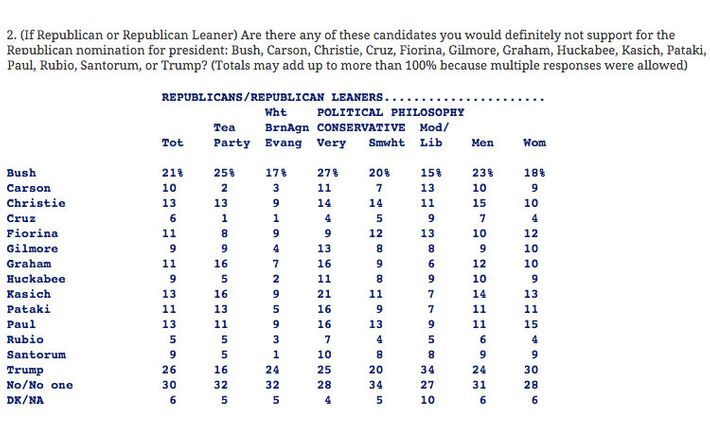 Theory No. 5: He’s too thirsty. A Politico report delved into Rubio’s abnormally high need for hydration, which has detracted from many of his speeches by causing him to interrupt himself, make slurping noises, or lunge for water bottles on camera. This may be another design flaw — perhaps the Rubio borg overheats if it is not fed water on a continuous basis. But in a wealthy country like the United States, potable water is widely available.

Any of these theories might be true. None of them seems terribly persuasive. For now, I am sticking with the hypothesis that Rubio remains the front-runner, and his polling has plenty of time to catch up with his paper credentials. He could still lose Iowa and New Hampshire and rack up a win in a pro-military state like South Carolina, where voters tend to follow the preferences of the party hierarchy. If Rubio simply fizzles out — a distinct possibility — his failure will be studied for years.