On Monday, comedian Jamie Loftus launched Shrek Nudes, an Etsy shop selling “the nation’s finest framed Shrek nudes.” A Shrek nude, to be clear, is a nude photograph of Loftus covered in green paint, not a drawing of the actual big, green two-eyed monster and his big, green one-eyed monster. The shop is the latest in the internet’s ongoing torrid love affair with the Shrek franchise. All of the proceeds from the sales go to support Planned Parenthood. We reached out to Loftus to learn more about why naked Shrek, why Planned Parenthood — really just overall: Why?

What, specifically, is a Shrek nude? Can you describe what one looks like?

Without going too much into it — since part of what you buy a Shrek nude for is to solve that mystery, and also my dad will read this — a Shrek nude is, quite simply, a nude of me painted as a Shrek. They were taken after a performance as a Shrek stripper at a variety show at ImprovBoston last July, where my friend Jake and I sang a few songs from Shrek: The Musical wearing track suits, then stripped to “All Star” by Smash Mouth and went full Shrek. Very dumb, but 100 people came to see it. The nudes were taken after that performance at my apartment at the time. 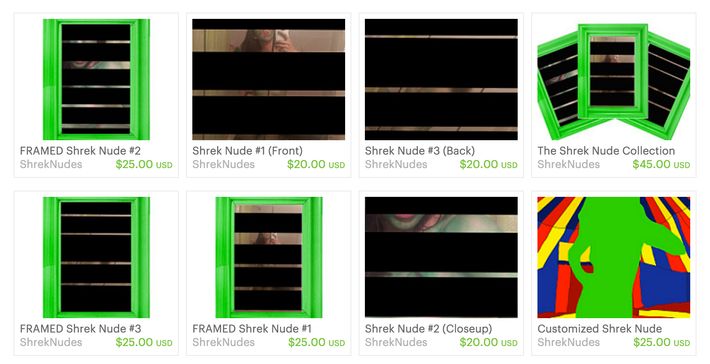 What inspired you to set up the shop?

Given recent events, I wanted to think of an unorthodox way I could kick [Planned Parenthood] some cash that didn’t involve me having to run or bake or participate in a lip-dub or something else I’m bad at. The real idea behind it is that no matter how silly or bizarre an idea people think selling Shrek nudes is, it’s an idea that involves my body that’s 100 percent within my control. I did the performance, took the pictures myself, put them online myself, etc. These were all my choices and there wasn’t anyone there to tell me I couldn’t do it. I thought that concept contrasted with a lot of attitudes toward women’s health and choice. The important options PP offers women are, of course, far more consequential, but given the climate we’re living in, women don’t necessarily get the choice of what their access to the service will be. If one person’s choice regarding their body can keep the doors open to a place that gives other women important options regarding their health and bodies, then I think it’s a worthwhile thing to do. Also, Shrek is for women, duh.

Business in the Shrek-nudes industry is booming! We are prepared for a second industrial revolution, minus all the typhus and child labor! And for people who don’t necessarily want pictures of my butt but do like the cause of the project, I have a separate fund-raising page set up. My ex-boyfriend gave to that one in lieu of a nude, which I find to be trés classy. [As of Wednesday morning, Loftus has sold 17 photos.]

What’s the profit margin of a Shrek nude?

All funds go to Planned Parenthood — there’s a small fee for shipping, and a small fee extracted for a frame if they choose that option. When each nude patron receives their Shrek nude, it includes a letter from me explaining exactly how much money they have donated and I’m keeping meticulous records.

SHREK NUDES SHOP = LIVE ALL PROCEEDS TO PLANNED PARENTHOOD THIS MIGHT BE A BAD IDEA https://t.co/KqXFzc9y5y pic.twitter.com/hnZ3k539x2

Why Shrek? What’s the draw for you personally?

I’ve been doing Shrek-related projects for a few years now after a friend and I discovered a live recording of Shrek: The Musical on Netflix. That incarnation of Shrek is so funny to me because seeing a grown human man dressed as Shrek is unequivocally hilarious. Seeing a grown man dressed as Shrek singing a very serious song that sounds like a Bon Jovi B-side about his big broken Shrek heart is even funnier, and local productions of said musical are the funniest thing in the world. So for a while I was going to local productions and bugging them — my favorite was going to Shrek: The Musical five times when I was writing for a site in Boston and tracking the toll it took from my sanity.

Is this something you’ve done before?

How long do you plan to keep the shop open?

The shop will be open until January 1, so everyone can swipe up their Shrek nudes for each and every nondenominational holiday.

Do you plan to branch out into other animated characters, or things with large web followings?

Nah, I’m keeping it fully Shrek’d — there might be a point where I add some other Shrek-nude-related projects, collaborate with other comedians and artists off the idea of a Shrek nude, but that kind of remains to be seen. Right now, it’s the nudes, and if people don’t want the nudes, a donation in lieu of them.