The Shanghai Tower (center) is the world’s second-tallest building. The one on the right can also open beer bottles. Photo: Gensler

If you think those 1,200-foot beanpoles going up in midtown are impressive, you should see what’s sprouting in Shanghai. According to a new report from the Council on Tall Buildings and Urban Habitat, 2015 was a record year for skyscraper construction — more than 100 were completed. The United States built two of them. China built 62, making it the prevailing skyscraper champ for the eighth consecutive year. 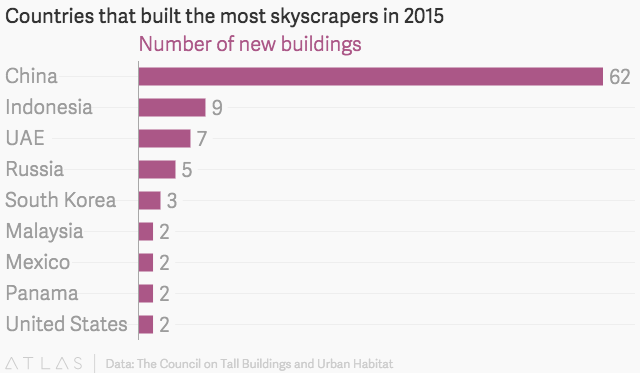 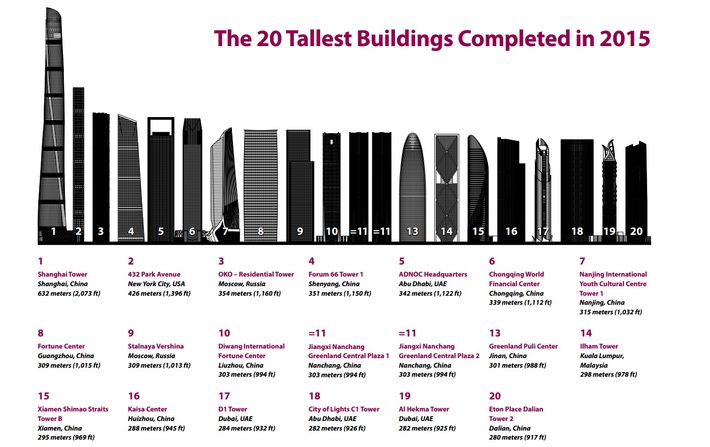 In an unusual turn, everyone’s BFF North Korea made the list this year thanks to the completion of the 660-foot Mirae Scientists Street Residential Tower, which was built in less than a year with, we’re sure, well-paid labor and high safety standards. The CTBUH predicts 2016 will be yet another record-breaking year, with between 110 and 135 skyscrapers scheduled to be completed. “Perhaps even more staggering is the fact that 18 to 27 of these buildings are expected to be in the supertall range,” the report reads, meaning they top 300 meters (about 985 feet). “Unsurprisingly, perhaps, the majority of these will be located in Asia and the Middle East.” Donald Trump will probably not be pleased to hear about this, even though we know that he loves China.

THE FEED
20 mins ago
early and often
early and often
Trump Was Tricked Into Dining With Too Many Antisemites
By Margaret Hartmann
The poor guy didn’t know about Nick Fuentes, he just wanted to hang with Kanye West — who repeatedly attacked his Jewish son-in-law, Jared Kushner.
4:06 p.m.
all the live long day
all the live long day
Why America’s Railroads Refuse to Give Their Workers Paid Leave
By Eric Levitz
Wall Street’s new robber barons can’t make the trains run on time.
2:23 p.m.
early and often
early and often
Herschel Walker Can’t Shake His Texas Residency Problem
By Ed Kilgore
The GOP Senate candidate is being hit with renewed questions about his residency, which underscore claims that his heroic image in Georgia is hollow.

12:16 p.m.
politics
politics
Hakeem Jeffries Elected As Next Leader of House Democrats
By Nia Prater
The 52-year-old congressman will become the first Black person to lead a congressional party.
11:48 a.m.
the inside game
the inside game
One of Democrats’ Biggest Draws This Year? Dave Matthews.
By Gabriel Debenedetti
Jamming out the white suburban Gen-X vote.
10:57 a.m.
world cup
world cup
Pulisic Says He’ll Return From Very Painful-Sounding Injury
By Benjamin Hart
“Pelvic” and “contusion” are two words you never want to see together.
8:00 a.m.
screen time
screen time
Why Elon Musk Is Picking a Fight With Apple
By John Herrman
He speaks of a civilizational battle. But he probably sees a potential business advantage.
11/29/2022
politics
politics
What a Difference 10 Years Makes: The Senate Votes to Protect Same-Sex Marriage
By Nia Prater
The legislation received support from several Republican senators, including Mitt Romney, who once openly opposed same-sex marriage.
11/29/2022
games
games
The U.S. Pulled It Off
By Will Leitch
They survived a tense second half and an injury to their best player to beat Iran.
11/29/2022
early and often
early and often
Republicans: Leave the World’s Richest Man Alone!
By Margaret Hartmann
Ron DeSantis and Kevin McCarthy want everyone to “stop picking on Elon Musk.” They’ve barely said anything about Trump dining with antisemites.
11/29/2022
politics
politics
Eric Adams Says His Upcoming Trip to Qatar Is ‘On My Dime’
By Nia Prater
The mayor is set to travel to Doha, Qatar, in preparation for New York City to serve as a host city for the 2026 FIFA World Cup.
11/29/2022
on with kara swisher
on with kara swisher
Chemist Carolyn Bertozzi on Biology’s Dark Matter
By Intelligencer Staff
The 2022 Nobel Prize winner tells Kara Swisher why cancer cells are a lot like M&Ms.
11/29/2022
the national interest
the national interest
Trump Brought Nazis Into the GOP. DeSantis Won’t Expel Them.
By Jonathan Chait
White nationalism is not just a Trump problem.
11/29/2022
sam bankman-fried
sam bankman-fried
In New Interview, SBF Talks GOP Donations, Fraud, Polyamory
By Kevin T. Dugan
Sam Bankman-Fried talks to a YouTuber — and sure has a lot to say for someone under criminal investigation.
11/29/2022
early and often
early and often
The NYC Media Might Have Cost Democrats the House
By Eric Levitz
After New York outlets hyped rising crime, counties in the NYC media market voted more Republican than their immediate neighbors.
11/29/2022
world cup
world cup
The Five Most Dramatic Subplots Ahead of U.S.-Iran
By Benjamin Hart
As the geopolitical foes square off in Qatar, there’s a lot hanging in the balance.
11/29/2022
early and often
early and often
Joe Biden Is Realizing Trump’s ‘America First’ Vision
By Eric Levitz
The president is alienating allies and waging economic war on China to ensure America’s industrial supremacy.
11/29/2022
the city politic
the city politic
10 New York City–Based Charities I’m Giving To
By Errol Louis
Giving Tuesday is a great opportunity to help fix what’s broken here in New York and around the world.
11/29/2022
cover story podcast
cover story podcast
The Billionaire’s Epiphany
By Intelligencer Staff
We weigh the collateral damage of one man’s con and another’s hero complex.
11/28/2022
tremendous content
tremendous content
Mike Lindell Is the Leader the Republican National Committee Deserves
By Margaret Hartmann
But he’s not the one it needs right now, so his candidacy is probably doomed.
11/28/2022
early and often
early and often
The Last Time the Republican Establishment Tried to Stop Trump
By Ross Barkan
If you think Trump is finished, remember the 2016 primaries.
11/28/2022
foreign interests
foreign interests
A Stunning Wave of Protests Has Erupted in China Over Its Zero-COVID Policies
By Chas Danner
Demonstrations against COVID restrictions — and the government — took place in numerous cities across mainland China over the weekend.
11/28/2022
the money game
the money game
13 More Disturbing Revelations About Sam Bankman-Fried
By Kevin T. Dugan and Matt Stieb
It’s been weeks since the dramatic crumbling of his crypto empire, and we’re still learning about the mess left behind by Bankman-Fried.
11/28/2022
social studies
social studies
Do You Have a Right Not to Be Lied To?
By Jeff Wise
Freedom of speech is being reconsidered by a group of legal scholars, who argue it is not absolute and may be outdated in a world of disinformation.
11/26/2022
politics
politics
What We Know About Trump’s Dinner With White Supremacist Nick Fuentes
By Chas Danner
The former president is claiming he did not know who his notorious dinner guest was.