Conservatives who disapprove of Donald Trump have converged upon their belief that Trump’s rise does not reflect any flaw in conservatism itself but can be blamed, in whole or in part, on Barack Obama. The latest version of this thinking comes from Commentary editor John Podhoretz, who spreads blame widely but takes care to blame Obama’s alleged failure for all of the current trends in politics he dislikes:

After the economic meltdown, Barack Obama acted boldly. He sought to fix the economy with a $1 trillion stimulus that did almost nothing. He promised to expand health-care and shrink its cost at the same time, a ludicrous and illogical promise that properly resulted in the kind of nihilistic cynicism he supposedly was elected to overcome.

As I have argued, one of the inherent problems with conservative dogma that make it vulnerable to an anti-intellectual demagogue like Trump is its disregard for expertise. Podhoretz’s summary is interesting not because it is the central point of his column, but because it is not. He is offering a kind of shorthand summary of the Obama presidency as conservatives see it right now. Podhoretz’s confident dismissal of Obama’s record shows just how removed conservatives are from empirical reality.

Begin with Podhoretz’s belief that the stimulus “did almost nothing.” It is almost completely impossible to find an economist who agrees with this proposition. A survey of academic economists found near unanimity that the stimulus reduced unemployment: 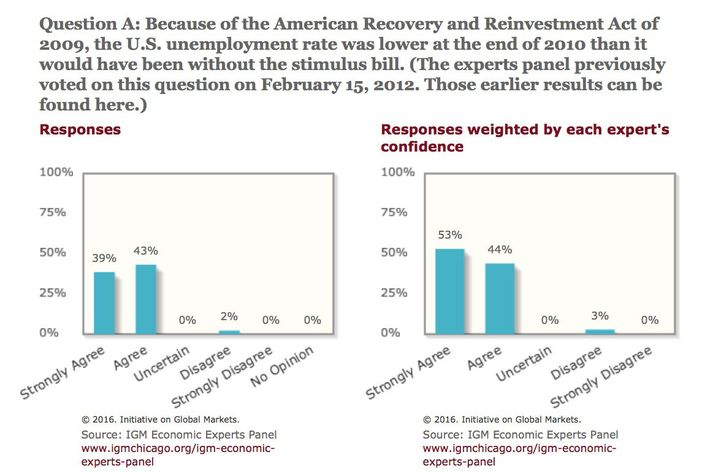 Even if we take Podhoretz’s claim more loosely and grant that he really meant to say the stimulus didn’t reduce unemployment enough given its size — well, not many economists believe that either: 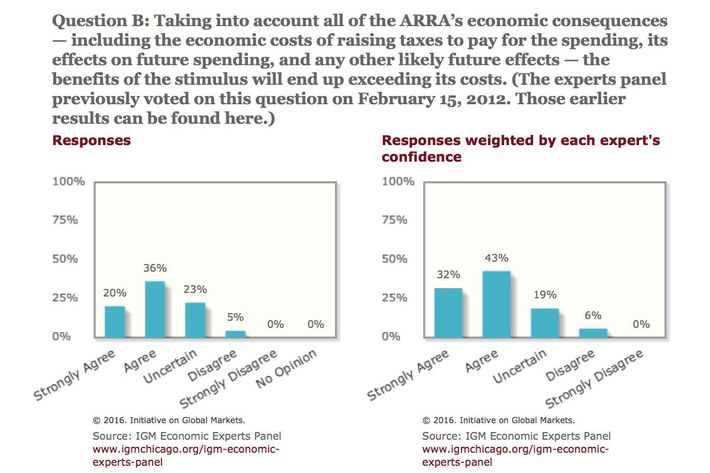 And that’s just among academic economists, who do include some devotees of various exotic fiscal theories embraced by conservatives. Among the macroeconomic forecasting field — that is, economists who predict these things for a living — there is unanimity that the stimulus helped the economy.

Podhoretz’s beliefs about the stimulus can’t be disproven, of course, because a counterfactual is inherently unprovable. What can be disproven is his belief about health-care reform. Podhoretz claims Obama’s promise to “expand health-care and shrink its cost at the same time” was “ludicrous and illogical.” He simply states this as a logical certainty, evidently convinced — as many conservatives are — that Obama’s goals are so obviously irreconcilable that merely pointing out the contradiction is all that is required to mock it.

But of course there’s no contradiction in hoping to expand access to health insurance and slow the long-term growth in its price. Coverage expansion is a onetime increase in aggregate spending based on increasing the number of people in the system. Bending the cost curve is a long-term reduction in the price of health care per person. It is depressing that so many conservatives cannot understand how the two goals can exist side by side.

The original projections for Obamacare did not assume that the law would reduce the total amount of health-care spending over the short term. Rather, it assumed that the coverage expansion would be paid for through a mix of spending cuts and higher taxes, and that the law’s many reforms to hold down cost inflations would take place gradually. (To take just one, penalizing hospitals with excessive Medicare readmission rates has caused a sharp reduction in hospital-acquired infections, which reduces suffering and saves money.) But a funny thing happened. Health-care inflation came down very quickly. And premiums on the exchanges came in far lower than expected. As a result, the government is actually spending less on health care now than it was projected to spend before the passage of Obamacare: 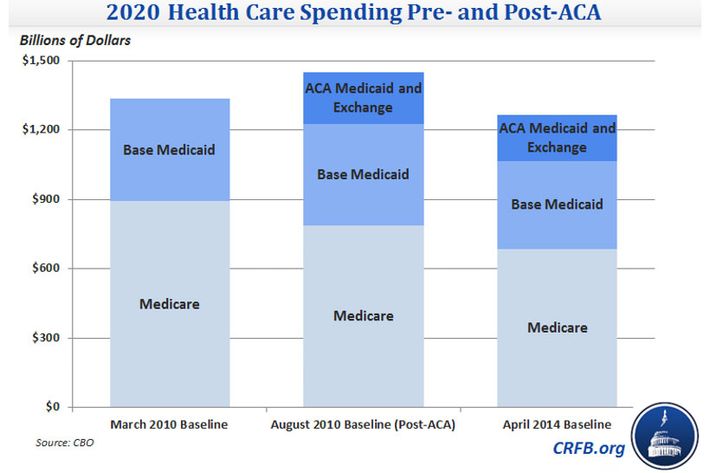 In other words, the result is far more successful than even the law’s advocates forecast. Contra Podhoretz, they did not believe Obamacare would reduce total health-care spending in the medium term. But that exact result has happened. Podhoretz shows no awareness that this has transpired. He simply proceeds with the same blithe assumption that it has not happened and only a complete idiot would believe it was even possible to happen.

Podhoretz is not a fringe figure. He is closer to the left wing of conservative-movement thought than the right wing. Even the “reasonable” members of the conservative movement, the ones aghast at the party’s front-runner, are prisoners of a dogma that is totally disconnected from any realistic assessment of the world.