Miss Friends? Don’t settle for yet another rerun of the classic ‘90s sitcom. Given the text of every Friends episode ever, a recurrent neural network can generate new scripts that are funnier than the originals by virtue of their sheer absurdity. Scottish cartoonist Andy Pandy set up such a bot, and posted several examples of its screenwriting prowess on Twitter over the weekend.

i fed a recurrent neural network with the scripts for every episode of friends and it learned to generate new scenes pic.twitter.com/RIPvYuzEJM 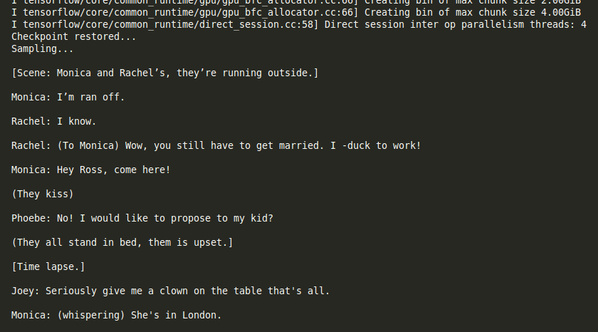 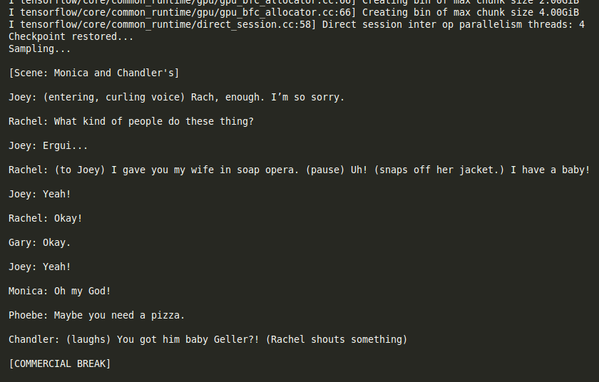 The bot does a good job simulating all the subtleties of Friends, like Chandler beginning sentences with “so,” and being “inside a muffin” (???), Joey talking in his famous “curling voice” (???), everyone crying and shouting about babies, and guest star Jean-Claude Van Damme. 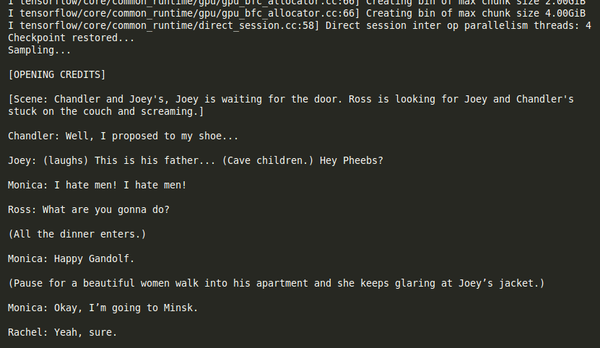 And computer-generated banter like “Yeah!” “Okay!” “Okay.” “Yeah!” really captures the Kauffman/Crane dialogue magic that kept the show running for 15 seasons. With the ability for algorithms to iterate infinitely (and websites to capitalize on nostalgia), it could run for 15 more, online.

Oddly, or perhaps fittingly, Pandy’s isn’t even the first such sitcom-writing AI. An even more garbled one, based on just the first season’s scripts, was created by Tom Armitage back in 2014. Here’s some sample dialogue:

Raindrops on roses and rabbits and kittens, Rachel and Monica turn to look at her. I believe it.

I’m-I’m-I’m glad you smashed her watch?

I let go of my hair, my head will fall off.

Mon, look what I said the other day about you making love with your socks on, but it isn’t.

Armitage even went so far as to feed his scripts into a CGI moviemaker, creating watchable episodes for the die-hards.

In the future, all sitcom writers will be replaced by Markov chains, and TV will be a lot funnier for it.

Friends Is Even Better Written by a Robot

THE FEED
14 mins ago
tokyo olympics
tokyo olympics
Athletes Aren’t The Ones Injecting the Politics Into This Olympics
By Will Leitch
While most Americans are happy to marvel at the athletic achievements, a small minority of bad-faith blowhards are rooting against Team USA.
1:07 p.m.
politics
politics
Congress Considers Emergency Eviction Moratorium As CDC Authority Lapses
By Ed Kilgore
Biden dithered about his legal authority to keep evictions frozen, and now the deadline is here — though some states are acting on their own.
1:00 p.m.
sports!
sports!
The Best Things We’ve Seen at the Olympics So Far
By Claire Lampen and Mia Mercado
A swim coach horny for gold, teens shredding the skateboarding category, and more.

11:44 a.m.
covid-19
covid-19
CDC Internal Report: Delta As Contagious As Chickenpox
By Paola Rosa-Aquino
The report, based on unpublished data, says that while infections in vaccinated people are rare, they may be just as contagious as the unvaccinated.
10:26 a.m.

Did Trump follow his pledge to donate the last 6 months of his presidential pay? It’s a mystery.
—Washington Post
8:00 a.m.
tokyo olympics
tokyo olympics
The One Limit Simone Biles Wouldn’t Break
By Ryu Spaeth
How the sports world’s obsession with mental toughness hurts athletes.
7:00 a.m.
the system
the system
Why Joe Biden’s Racial Justice Agenda Is Stalled
By Zak Cheney-Rice
He faces resistance from moderate Democrats. But he’s also tied his own hands.
7/29/2021
delta variant
delta variant
GOP Reps Flail Against House Mask Mandate by Barging Into the Senate
By Matt Stieb
Productive behavior just before the August recess.
7/29/2021
abortion
abortion
Anti-Abortion Movement Lets the Mask Slip in Plea to Supreme Court
By Ed Kilgore
It may be time for those who really want to ban all abortions to stop pretending they’re just worried about late-term instances or clinic regulations.
7/29/2021
politics
politics
What’s in the Bipartisan Infrastructure Deal?
By Nia Prater
Here’s how the $1.2 trillion package, which just cleared its first Senate hurdle, will fund roads, bridges, water cleanup, and broadband internet.
7/29/2021
politics
politics
What Other Deadly Things Will Ron DeSantis Joke About?
By Sarah Jones
Florida’s governor used COVID as an icebreaker at a conservative conference. Here are some alternatives.
7/29/2021
covid-19
covid-19
Universal Face-Mask Mandates Are Back. Here’s What to Know.
By Chas Danner
Amid the Delta wave, the CDC is once again recommending indoor mask mandates, including in all schools. But the debate remains politically fraught.
7/29/2021
the jab
the jab
$100 For a Covid Shot in New York? It’s Worked Well Elsewhere
By Valeria Ricciulli
The new incentive comes as Delta-variant cases are ramping up.
7/29/2021
explainer
explainer
Why the Arizona Election-Audit Circus Just Won’t End
By Ed Kilgore
A guide to how votes from Maricopa County were subjected to a sloppy recount, why it’s still dragging on, and what its proponents are really after.
7/29/2021

“Remote working for a short period of time, fine, but that’s not how the entrepreneurial economy works… Say to your workforce, ‘By Labor Day, everyone is back in the office.’”
—@dahvnyc
7/28/2021
politics
politics
Gavin Newsom Needs Democrats to Get Worried About the Recall
By Ed Kilgore
With the California governor’s prospects suddenly looking much iffier, he must find a way to turn out complacent Democrats.
7/28/2021
politics
politics
Republican Stands By 1/6 ‘Tourist Visit’ Comparison After Police Testify
By Nia Prater
“If you didn’t know the TV footage was a video from January 6, you would actually think it was a normal tourist visit.”
7/28/2021
politics
politics
Donald Trump’s Low-Energy Night in Texas
By Ben Jacobs
The leader of the Republican Party couldn’t elect his handpicked candidate in a congressional special election.
7/28/2021
2021 olympics
2021 olympics
Simone Biles Withdraws From Individual All-Around Final at Tokyo Olympics
By Margaret Hartmann
The star gymnast will not compete on Thursday as she continues to focus on her mental health. She’s yet to make a decision about next week’s events.
7/28/2021
tokyo olympics
tokyo olympics
The Singular Beauty of the 400-Meter Hurdles
By David Gendelman
Why both the men’s and women’s races are the most highly anticipated track-and-field events of the Olympics.
7/28/2021
pandemic
pandemic
What If Vaccines Don’t Really Stop the Virus From Spreading?
By Justin Miller and David Wallace-Wells
Unpacking the CDC’s head-snapping new guidance on the vaccinated and masks.
7/27/2021
delta variant
delta variant
Vaccine Mandates Finally Have Some Momentum
By Matt Stieb
NYC, California, and the VA announced policies to compel unvaccinated employees to get the shot. Biden is reportedly considering a similar mandate.