The newest batch of Hillary Clinton emails arrived a little late (they were supposed to be out December 31), but the State Department worked into the night and finally released 3,000 pages of “fit n sparkly” new content around 2 a.m. They’re mostly boring administrative emails — lots of Clinton asking aides to print things for her — but 66 were retroactively classified, and the only email marked “secret” features Clinton saying, “Wow — not good.”

Also of note in this set of correspondence is that we finally see emails Clinton sent during and after the Benghazi attacks. She also receives a note from Bob Bergdahl (Sergeant Bowe Bergdahl’s father), chats with Senator Barbara Mikulski, and gives a bull named Emmanuel to a women’s dairy co-op in Malawi. Bonus content: She expresses sincere surprise that a State Department employee is using his personal email account. Irony!

In an email sent September 11, 2012, at 11 p.m., Clinton describes the attacks to her daughter, Chelsea, who’s using the alias “Diane Reynolds.” The two appear to be planning a phone call, but Hillary puts the chat on hold when she finds out what happened. She describes the attackers as an “Al Queda-like group,” which was later proved false.

Two days later Clinton received a note of condolence from Bob Bergdahl by way of her adviser Jake Sullivan. “Your service is most noble and almost invisible,” he writes. Clinton instructs Sullivan to prepare a response. 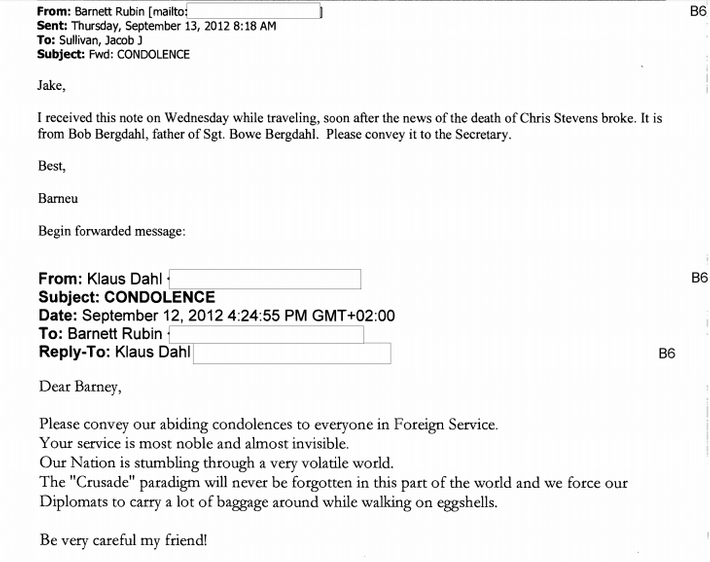 That summer Clinton receives a cheerful note from her BFF Senator Mikulski: “How about that SCOTUS.      Health. Decision. !!!!!!” Indeed.

Clinton rounded off her summer in the best way possible: by giving back. She’s super excited about Raj Shah’s “dynamite talk” packed with “stunning statistics” and ends the whole exchange on a high note: “I just gave a bull named Emmanuel to a women’s dairy co-op in Malawi! You never know… “

The final thrilling update from Clinton’s BlackBerry is one steeped in irony. After receiving intel from John Godfrey, one of the department’s “most knowledgeable officers in Libya,” Clinton asks who he works for. (He works for her.) She then expresses surprise that Godfrey would use his personal email account to send professional emails. Godfrey’s email address is redacted, so we have no way of knowing which server he’s using — we can only hope it’s secure. 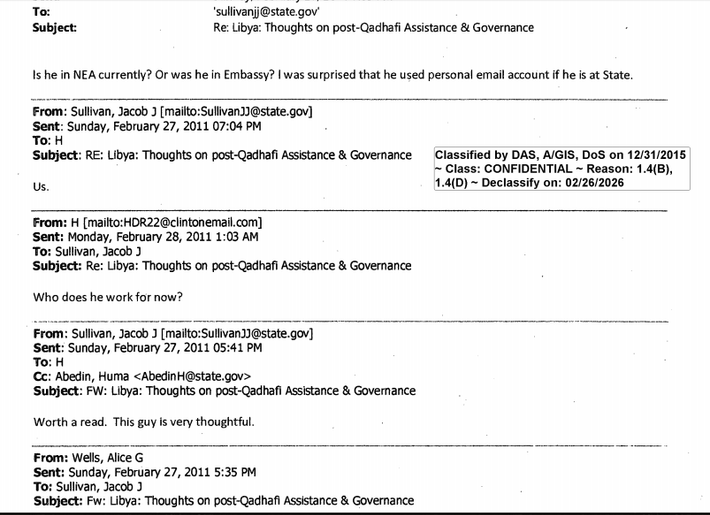 An inspector general’s report that came out Thursday held Clinton and her staff at fault for not disclosing her use of a private email server, even after a watchdog group filed a request for information on her email use. Clinton’s chief of staff “had an obligation to correct the record,” the group’s leader told the New York Times. “She knew about it, and she didn’t tell anybody, ‘This is wrong.’”