Concern over China’s stock market is catching. Yesterday, the Hong Kong dollar posted its largest two-day decline since the first Bush administration, thanks to a fall in Chinese stocks that’s led to dire financial predictions for the new year. According to Bloomberg, the local dollar lost 0.15 percent yesterday, taking its two-day drop to 0.4 percent — which, though it sounds modest, is a big shift for this typically immobile currency, and is its largest fall since October 1992.

There’s been speculation that the peg linking Hong Kong’s dollar to the U.S. dollar will be removed (the city’s exchange-rate system limits declines against the U.S. dollar to HK$7.85 and caps gains at HK$7.75), but officials say no such change will take place. The government is “fully committed to maintaining the linked exchange-rate system, which continues to serve Hong Kong well,” a Hong Kong Monetary Authority spokesperson told Bloomberg. “We see no need and have no intention to change the system.”

The Hong Kong dollar’s nosedive comes as China enters its third bear market (defined as a 20 percent drop in a recent peak) in less than a year, Quartz reports. Today the country’s key stock indicator, the Shanghai Index, fell 3.5 percent, reaching its lowest level since December 2014.

“Equities and credit have become very dangerous,” Royal Bank of Scotland credit chief Andrew Roberts wrote in an ominous note to investors earlier this week. “China has set off a major correction, and it is going to snowball.” 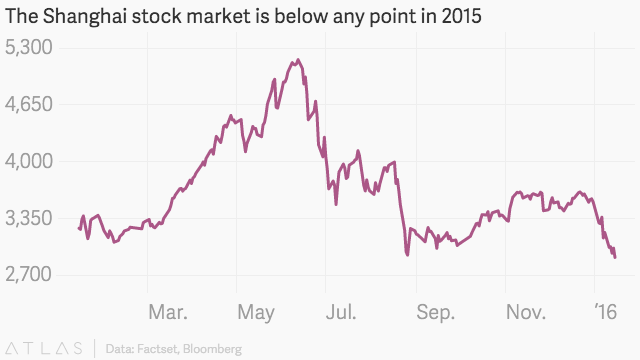 Sure, blame China, but the real cause of Hong Kong’s distress is likely the wild boar that’s been loose in the city’s financial district for hours, evading police and distracting finance workers.

+Comments Leave a Comment
The Hong Kong Dollar Is Crashing

THE FEED
8:41 p.m.
covid-19
covid-19
What We Do and Don’t Know About the Omicron Variant
By Intelligencer Staff
Scientists continue to study the new variant, while the WHO has advised everyone 60 and older to avoid travel.
7:04 p.m.
politics
politics
Dr. Oz and My ‘Aha Moment’ on Oprah’s Quackery
By Margaret Hartmann
With one of Oprah’s more dangerous celebrity creations running for the Senate, I can’t avoid reckoning with her penchant for promoting pseudoscience.
6:48 p.m.
the fallout
the fallout
CNN Suspends Chris Cuomo Indefinitely
By Matt Stieb
The cable-news host is out after a transcript from the NY attorney general showed he had tried to dig up info on his brother Andrew Cuomo’s accusers.

6:00 p.m.
barbados
barbados
Barbados Breaks With Britain to Become World’s Newest Republic
By Matt Stieb
The Caribbean nation removed Queen Elizabeth II as its head of state and promptly declared Rihanna a national hero.
3:38 p.m.
2022 elections
2022 elections
New Jersey’s Dr. Oz to Enter Pennsylvania Senate Race
By Benjamin Hart
The pseudoscience amplifier is aiming for that sweet, sweet Trump endorsement.
1:17 p.m.
politics
politics
Clinton’s Misunderstood ‘Sister Soulja Moment’ Doesn’t Need a Revival
By Ed Kilgore
When you understand the full context of Clinton’s 1992 remarks, calls for Biden to deliver his own challenge to Black activists make even less sense.
1:04 p.m.
abortion
abortion
There’s No Such Thing As a Pro-Life Feminist
By Sarah Jones
The specious claim the right uses to undermine abortion.
12:17 p.m.
just asking questions
just asking questions
How Jack Dorsey Failed Twitter
By James D. Walsh
Scott Galloway dances on the outgoing CEO’s grave.
9:00 a.m.
the republican party
the republican party
Only Republicans Can Stop the Republicans Now
By Eric Levitz
The biggest obstacle to the GOP’s political dominance is now the party’s own dearth of ideological discipline.
8:00 a.m.
technology
technology
A Normie’s Guide to Becoming a Crypto Person
How to (cautiously and skeptically) fall down the rabbit hole.
7:00 a.m.
q&a
q&a
How Shareholder Capitalism Crashed a Plane (Two, Actually)
By Moe Tkacik
Talking with the author of Flying Blind, a new book about Boeing’s deadly 737 Max.
11/29/2021
eric's trip
eric's trip
Eric Adams Jets Off Again
By Matt Stieb
With his trip to Ghana this week, the incoming mayor has gone on three international outings since the primary.
11/29/2021
court appearances
court appearances
The Ghislaine Maxwell Trial Begins
By Choire Sicha
On day one, the defense previewed its strategy of undermining the women who accused her of facilitating abuse.
11/29/2021
new york
new york
Chris Cuomo Was Asking for Info on His Brother’s Accusers
By Matt Stieb
New documents from the attorney general’s office show he was begging to help his big brother and shaking down other journalists.
11/29/2021
games
games
Everyone Used to Hate Coach K
By Will Leitch
Why are once widely reviled sports figures so often redeemed in the public eye?
11/29/2021
business
business
Amazon Workers Will Get Another Shot at Unionizing
By Sarah Jones
There will be another election at the Bessemer, Alabama, warehouse after the company was accused of breaking the law.
11/29/2021
crime
crime
Everything to Know About Jussie Smollett’s Trial
By Bindu Bansinath and Amanda Arnold
The actor was accused of staging his own hate crime attack in 2019. Things only got more complicated from there.
11/29/2021
the national interest
the national interest
Lauren Boebert’s Bigoted Attack on Ilhan Omar
By Jonathan Chait
Smearing Muslims for fun and profit.
11/29/2021
explainer
explainer
What Is Congress Even Doing Right Now? A Brief Guide.
By Ed Kilgore
Congress is tangled in interlocking bills and delayed crises. Here’s the real status and deadline on reconciliation, the debt ceiling, and the rest.
11/29/2021
politics
politics
Trump’s 2024 Veepstakes Is Already Under Way
By Ed Kilgore
The former president will probably choose someone unlikely to burnish his own self-image of indispensability as his next running mate.
11/29/2021
the national interest
the national interest
Republicans Are Undermining the Vaccine and Blaming Biden for It
By Jonathan Chait
“Why do so many right-wing people distrust the vaccine?” conservatives wonder. It is a mystery.
11/29/2021
politics
politics
A Long Island Centrist Jumps Into the Governor’s Race
By Nia Prater
Representative Tom Suozzi will retire from Congress and take a shot at Albany.
11/29/2021
silicon valley
silicon valley
At Twitter, @jack Is Out As CEO and @paraga Is In
By Kevin T. Dugan
Jack Dorsey is now leading only one large Silicon Valley company.
11/29/2021
politics
politics
Matthew McConaughey’s Next Role Won’t Be Texas Governor
By Benjamin Hart
The actor announced that he will not be running for governor of his home state after all.
11/29/2021
red meat
red meat
Welcome to the Beach Cafe, the Upper East Side’s Republican Cheers
By Shawn McCreesh
Ann Coulter, Cindy Adams, and Donald Jr. hang out there; try the (Roger) Stone Burger.