Throughout the past month or so, a simple man by the name of Bill has been dispensing etiquette tips on Facebook, either affirming or angering. Memes feature Bill, in his signature knitted hat, offering advice that should be obvious to most people with a pulse. It’s like Goofus & Gallant for the digital age, only the art is not as good and Goofus is dead, so we’re just stuck with boring, preachy Gallant.

If you haven’t seen any Bill memes on Facebook, you’re lucky. As of Tuesday morning, more than 1.3 million people have liked the main Be Like Bill page on Facebook.

Bill doesn't have time for that kind of bullshit. Be like Bill.

In many ways, Bill is a perfect storm of the modern memescape. He’s got a rudimentary art style that’s simple to replicate, and he embodies the scolding, holier-than-thou behavior endemic to social media.

Which is why Bill sucks. Bill represents social media’s worst impulse: the claim to moral superiority wrapped in nagging, passive-aggressive complaint. Bill is every subtweet, every behavior-policing Facebook status update, every smug and condescending comment, illustrated exactly as crudely as the sentiment deserves.

Who needs to see this? What person might be convinced to amend his behavior by a primitively drawn, crudely articulated cartoon? No one, obviously. As is so often the case, the Bill meme isn’t really for anyone except the person sharing the Bill meme. It’s a way to give voice to the vague sense of irritation that generates so much social-media content and, at the same time, signal your own behavioral excellence.

The Bill Facebook page, it may not surprise you to learn, is the product of a self-described “internet entrepreneur,” Eugeniu Croitoru, and a colleague, Debabrata Nath. Croitoru told the BBC that the character “can be anyone who is smart and has common sense and doesn’t do annoying things.” You know, annoying things, like scolding people on social media.

Bill has spread to other locales and languages as well. In Arabic, he’s Bilal; in Malaysia, he’s Rashid; in Spanish, he’s Jose. There is also a female equivalent named Emily.

Of course, the backlash against Bill has already begun. 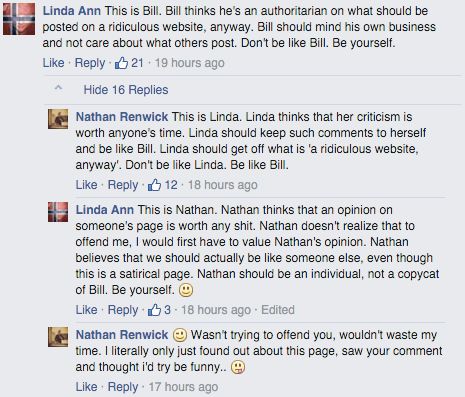 A page called Don’t Be Like Bill or Emily has cropped up, calling out Bill on his bullshit (“Billshit”?).

Translation, via Vocativ: “This is Bashar! Bashar heard that there were peaceful protests asking for freedom.. Bashar answered with oppression and live ammunition!! Bashar is a murderer.. Don’t be like Bashar.”

THE FEED
10:00 a.m.
elections of 2021
elections of 2021
Republicans Now Eager to Spin the Election in Virginia
By Ed Kilgore
After the California recall didn’t go so well for Republicans, their focus is on wealthy Virginia gubernatorial candidate Glenn Youngkin.
9:00 a.m.
pandemic
pandemic
‘I Did Not Want My Children to Be Home Again’
By Nia Prater
After more than a year of Zoom school, NYC kids returned to classrooms, much to the relief of parents and teachers.
9/17/2021
crime
crime
Robert Durst Found Guilty of Murdering Friend
By Chas Danner
The real-estate heir was convicted of first-degree murder for killing Susan Berman in 2000 in an attempt to conceal how he had murdered his wife.