You’re sitting at your computer at 7:59 a.m. Tickets for U2 at Madison Square Garden are about to go on sale. At 8:01, you refresh your page … and they are sold out. You check StubHub (the ticket-resale site), and there they all are, their prices marked way up. It’s not that 1,000 U2 fans bought their tickets in the past minute and decided to scalp ’em. The robots did it, and Eric Schneiderman has entered into battle with their human overlords.

Schneiderman, the attorney general of New York State, released a report on Wednesday calling the online ticket market a “fixed game.” People and bots in this industry, he says, “break our laws, prey on ordinary consumers, and deny New Yorkers affordable access to the concerts and sporting events they love.” He’s looking to go after these electronic ticket buyers — but, so far, the brokers behind the bots have proven elusive. “Although NYAG has taken steps to stop many of the largest operations from using Bots to purchase tickets to events in New York,” Schneiderman’s report explains, “we recognize that other brokers may take their place. A longer-term solution must include improvements in Bot detection and prevention methods.”

Automated bots — which are prohibited in New York State — use multiple IP addresses to get around sites’ standard four-tickets-per-customer rules. Once they scoop up tickets, they resell them for high prices on third-party sites. In 2014, a bot grabbed 1,012 U2 tickets to the Garden in the first minute they were available; more than 15,000 tickets were bought by two bots that day, and some that had been sold for $350 were resold for $1,249. In 2013, another automated purchaser obtained 520 tickets to a Beyoncé concert at the Barclays Center in 2013 in three minutes. The report also shows that bots have been able to buy more than 90 percent of the best seats to any given show. They also employ human assistants, in the form of “armies of human typers in foreign countries to bypass CAPTCHAs,” and acquire thousands of credit cards with dummy names. 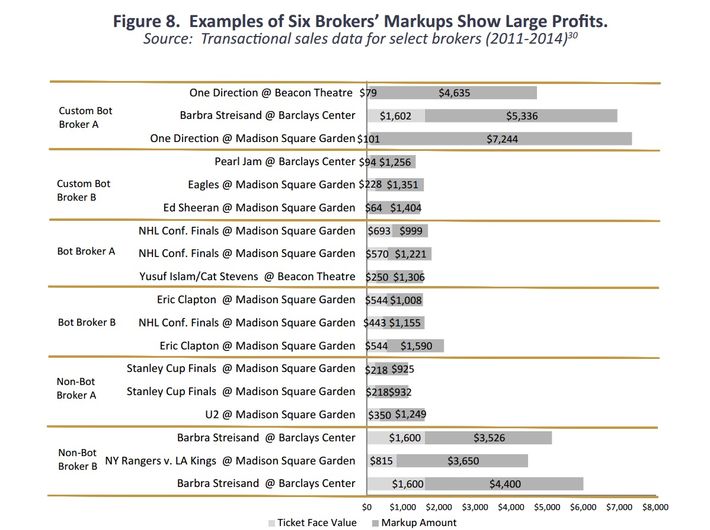 Schneiderman’s report also talks about more straightforward scalping businesses run by licensed ticket brokers, which are legal but loathsome — the resale of a single One Direction ticket recently sent the cost from $101 to $7,244 — and about ticket “holds” for industry insiders, as well as presales for club members and credit-card holders. A LiveNation/AEG analysis, referenced in the AG’s report, showed that, on average, less than half of all seats for major events are ever made available to the general public. A Coldplay–and–Jay Z concert at Barclays in 2012 reserved 70 percent of its seats for presale club members. At Justin Bieber’s MSG show in 2012, almost 30 percent of tickets were held back for industry insiders.

As he begins his push to shut down the bots, Schneiderman is urging platforms like StubHub and TicketsNow to demand that their users obey the law. He wants to make it easier for vendors to display the face value of the tickets they sell. And he proposes revoking the “paperless ticket ban” to make a purchase harder to transfer, and to require concertgoers to bring the purchasing credit card to pick up their tickets.

THE FEED
9:00 a.m.
politics
politics
The New Anti-Feminism
By Sarah Jones
Conservatives used to argue it was bad for men and women. Now they have dispensed with the pretense of caring about women.
2:48 a.m.
covid-19
covid-19
What We Do and Don’t Know About the Omicron (B.1.1.529) Variant
By Chas Danner
Scientists say the variant, which has been spreading in southern Africa, has a worrisome number of mutations — but more research is needed.
11/26/2021
first person
first person
Frank Rich on His Friendship With Stephen Sondheim
By Frank Rich
A lifetime making sense of the extraordinary songwriter — as young fan; critic and “enemy”; and, by now, old friend.

11/26/2021
2022 midterms
2022 midterms
Republicans Can’t Bet on Finding Perfectly Trumpy Candidates
By Ed Kilgore
The GOP thinks candidates who embrace Trump without going full MAGA are the key to winning the midterms. Good luck finding them.
11/26/2021
politics
politics
Merrick Garland Gets Political, Whether He Likes It or Not
By Ankush Khardori
Hated by the right and distrusted by the left, the attorney general is in a perilous position of his own making.
11/25/2021
past is prologue
past is prologue
Cheer Up, Democrats! You’ve Had It Worse Than This.
By Ed Kilgore
The Democratic Party has a lot of problems, but it’s faced similarly sticky situations before and survived.
11/24/2021
politics
politics
For Pete’s Sake, Stop the Presidential Buzz About Buttigieg
By Ed Kilgore
The secretary of Transportation has plenty of fish to fry without constant speculation that antagonizes Kamala Harris supporters to no good end.
11/24/2021
election 2022
election 2022
How Is Paperboy Love Prince Possibly Running for Congress in 11 Districts?
By Valeria Ricciulli
The former mayoral candidate can run, but getting on the ballot on all the districts may be a challenge.
11/24/2021
ahmaud arbery
ahmaud arbery
The Legal Uses of Blackness
By Zak Cheney-Rice
Why attorneys in the Ahmaud Arbery case did — and didn’t— invoke his race.
11/24/2021
black lives matter
black lives matter
Jury Convicts All Three Men Accused of Murdering Ahmaud Arbery
By Justin Miller
Three white men chased a Black man through their neighborhood and killed him, in what has been likened to a modern-day lynching.
11/24/2021
wirecutter
wirecutter
Here’s the Best Strike for Most People
By Choire Sicha
The Wirecutter stops typing.
11/24/2021
self-censorship
self-censorship
Jamie Dimon Quickly Backtracks on Mild China Joke
By Benjamin Hart
He needs to stay on the country’s good side, and Xi Jinping isn’t known for his sense of humor.
11/24/2021
politics
politics
‘I Want to Be a 21st-Century Trustbuster’: Zephyr Teachout on Her Run for A.G.
By Nia Prater
The progressive law professor who challenged Cuomo for governor explains why she’s back with a second shot for attorney general.
11/24/2021
the republican party
the republican party
Is the GOP’s Policy Agenda Hidden or Nonexistent?
By Eric Levitz
For a party that may soon have full control of government, its ambitions remain remarkably unclear.
11/24/2021
pivot
pivot
Super-Apps Are Inevitable
By Scott Galloway
Get ready for the first $10 trillion tech company.
11/24/2021
qanon
qanon
‘Michael Always Says There’s No Coincidences’
By Matt Stieb
A demolition contractor turned numerology guru fills the void at the heart of QAnon, bringing his followers to Dealey Plaza to revive the Kennedys.
11/23/2021
the money game
the money game
There’s a New Crypto Land Grab Going On
By Kevin T. Dugan
A lot of people are suddenly betting that, in the metaverse, .eth addresses will be the new .com. So what is amazon.eth worth?
11/23/2021
charlottesville
charlottesville
Unite the Right Organizers Ordered to Pay $26 Million in Damages
By Matt Stieb
The payment comes following a civil lawsuit in which the defendants, including Richard Spencer, were found guilty on a state conspiracy claim.
11/23/2021
crime
crime
Deadly Waukesha, Wisconsin, Christmas-Parade Tragedy: What We Know
By Intelligencer Staff
A driver faces murder charges after killing six people and injuring over 60 while fleeing a domestic dispute.
11/23/2021
thanksgiving
thanksgiving
I’m Thankful for the End of Guides to Arguing With Trumpy Relatives
By Margaret Hartmann
Since 2016, I’ve been subjected to pieces that insisted the battle for the soul of America was being waged at my Thanksgiving table. Good riddance.
11/23/2021
return to office
return to office
Your Boss Misses You
By Choire Sicha
Let’s all office together.
11/23/2021
sports
sports
Women’s Tennis Had to Stand Up to China
By Caira Conner
Other sports could get away without direct confrontation. Peng Shuai feels like a turning point.
11/23/2021
2022 midterms
2022 midterms
Louie Gohmert Joins Wild Texas Attorney General Race
By Ed Kilgore
The MAGA representative will challenge Trump-endorsed Ken Paxton and George P. Bush in a race that shows the importance of state offices.
11/23/2021
the law
the law
The End of the Viability Line
By Irin Carmon
If the Supreme Court lets Mississippi ban abortion at 15 weeks, before fetal viability, much more than that will be lost.
11/23/2021
the national interest
the national interest
Chris Christie and the Death of the Never Trump Republican
By Jonathan Chait
“The line of supporting Donald Trump starts behind me!”