What does it take to please you people? Photo: Olivier Douliery/ABACA/Corbis

The New York Times’ “Room for Debate” column today debates “the defining aspects of Obama’s legacy.” Six writers contributed to the discussion. It is safe to say the debate has not gone well for the Obama administration: 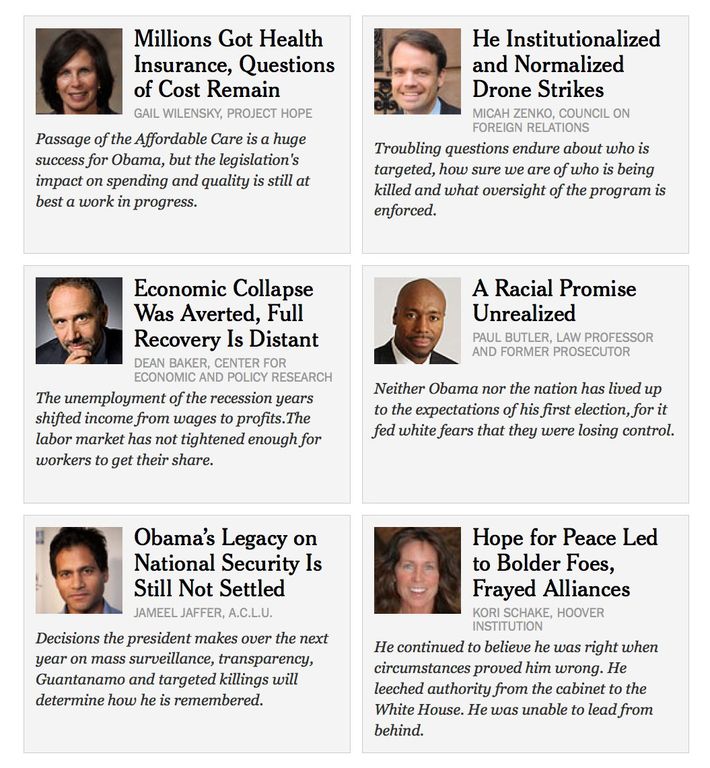 This, in somewhat exaggerated form, is how the public debate has played out through the seven years of the Obama presidency. The conservative opposition has been apoplectic, and liberal supporters disappointed. The left has focused far more attention on holding the administration’s feet to the fire and guarding against complacency than advocating for (and celebrating) its achievements. And the right has maintained a wall of totalistic opposition that cannot be cracked by any amount of real-world developments.

Here is one of the oddities of the last seven years. Barack Obama won a clear majority in both his election and his reelection, fulfilled most of his policy goals as president, is presiding over a solid economic recovery, and has avoided any real scandal (i.e., one that exists outside the opposition fever swamps). Yet his approval ratings have consistently trailed his vote percentages. More than half of the electorate voted for him twice, but well under half approves of his job performance. Despite the fact that he accomplished what he said he would, Obama quickly lost a chunk of the public that voted for him, and has never won them back.

In large part this represents negative polarization, the dominant political force of our time. Negative polarization is a phenomenon defined by political scientists Alan Abramowitz and Steven Webster. It means that the public has sorted itself into hardened political camps with firm voting habits, but these loyalties are based more on antipathy for the opposing party than affirmative support for one’s own side. Indeed, a growing share of voters describes itself as “independent” even as its behavior shows that it is more, not less, consistent in its support for a single party. In a negative-polarization world, many of Obama’s supporters will express dissatisfaction with his job performance but vote for him and his party anyway, because they loathe the Republicans so much. The same phenomenon would likely hold true in reverse if a Republican held office. (It may have: George W. Bush’s approval ratings rose in the run-up to the 2004 election, and then fell back, as his supporters went from assessing his performance in a vacuum to comparing him to the loathsome, cheesesteak-bungling Frenchie John Kerry.)

But I wonder whether the tone of the Obama-era debate has contributed as well. Most major Obama-era policy debates have resulted in a mix of right-wing apocalyptic rage and liberal dismay. The stimulus was too small, Obamacare lacked a public option, Dodd-Frank failed to break up the big banks, and on and on. When the public that barely follows the debate hears that one side considers Obama’s bill the destruction of freedom in America, and the other side considers it a disappointing compromise, the impression that comes off is not positive. None of this is to say that the left has an obligation to support the administration or hold back its criticisms, only that guarding against complacency has costs of its own. In the light of history, the Obama administration is likely to be seen as a triumph. The sour perspective maintained by his supporters in his own time will be forgotten — or, if and when it is revisited, it will seem very weird.

—Speaker Nancy Pelosi on Sunday
1:27 p.m.
covid-19
covid-19
Why Are U.K. COVID Cases Soaring?
By Paola Rosa-Aquino
The highly vaccinated country is experiencing its biggest spike in new infections since midsummer.
9:00 a.m.
the money game
the money game
Why Your Group Chat Could Be Worth Millions
By Max Read
If you turn it into a DAO, that is. But what’s a DAO? It’s a little bit cryptocurrency, a little bit gamer clan, a little bit pyramid scheme.

10/23/2021
facebook
facebook
What Was Leaked in the Facebook Papers?
By Chas Danner
A guide to the newly reported revelations from a trove of internal company documents shared by a company whistleblower.
10/23/2021
immigration
immigration
U.S. Border Arrests Hit All-Time High
By Paola Rosa-Aquino
About 1.7 million migrants were detained while attempting to cross into the U.S. over the last 12 months.
10/23/2021

F.D.A. Says Pfizer Vaccine’s Benefits Outweigh Key Risks in Children 5 to 11
—The New York Times
10/23/2021
past is prologue
past is prologue
Politics Was Riddled With Celebrities Long Before Trump
By Ed Kilgore
Actors, musicians, and athletes entering U.S. politics isn’t a new trend — in fact, it may be one of the oldest.
10/22/2021
crime and punishment
crime and punishment
Giuliani Ally Lev Parnas Convicted of Making Illegal Campaign Donations
By Chas Danner
The one-time major player in Trump’s Ukraine scandal is going to prison on unrelated campaign-finance charges.
10/22/2021
abortion
abortion
Texas Abortion Law Likely to Stay in Place Until Court Deals With Roe v. Wade
By Ed Kilgore
All roads now appear to be converging on the Supreme Court’s big upcoming decision.
10/22/2021
pivot
pivot
Facebook May Be Mendacious, But It’s Not Stupid
By Intelligencer Staff
A company name change could serve Mark Zuckerberg’s interests well.
10/22/2021
mike pence
mike pence
For Mike Pence, Running a Doomed Presidential Race Is a Living
By Ed Kilgore
The former veep doesn’t have to be a plausible presidential candidate to stay on the gravy train.
10/22/2021
the city politic
the city politic
City Hall Starved Taxi Drivers Before They Went on Hunger Strike
By Errol Louis
How driving a cab became a dead end.
10/22/2021
explainer
explainer
What to Know About Booster Shots, Now
By Paola Rosa-Aquino and Chas Danner
Countless Americans are now eligible for a booster dose of any of the three U.S.-authorized COVID vaccines.
10/22/2021
public safety
public safety
The Police’s Farcical War on Vaccine Mandates
By Zak Cheney-Rice
It turns out cops may not have a special appreciation for the sanctity of life after all.
10/22/2021
politics
politics
Anybody Can Be Joe Manchin Right Now
By Ben Jacobs
A clutch of Democrats threaten to torpedo Biden’s agenda unless he agrees to lower taxes for middle-class blue-staters.
10/22/2021
build back better
build back better
The Democrats Have a Collective-Action Problem
By Eric Levitz
Can Joe Biden’s agenda survive the competing claims within his own party?
10/22/2021
covid-19
covid-19
Booster Shots Are Now Approved for All of the COVID Vaccines
By Nia Prater
Additional dose recommended for all with J&J and many who got Moderna, with “mix and match” allowed for all varieties.
10/22/2021
new york
new york
Chuck Schumer Endorses India Walton for Buffalo Mayor
By Matt Stieb
A major Establishment boost for the socialist candidate.
10/21/2021
rikers island
rikers island
New Photos Show Horrific Overcrowding at Rikers Island
By Matt Stieb
Pictures obtained by the New York Post show up to 26 men held in a cell meant for a single detainee amid deteriorating pandemic conditions.
10/21/2021
the money game
the money game
What’s the Deal With Donald Trump’s SPAC?
By Michelle Celarier
After a surprise announcement, a Trump-linked stock skyrocketed — tripling in price and drawing in waves of retail investors.
10/21/2021
the sports section
the sports section
Baseball Teams Should Get to Pick Their Playoff Opponents
By Joe DeLessio
It’s much more fair-minded than the current system — and much more fun.
10/21/2021
the economy
the economy
Behold the Insane Traffic Jam at the Port of Los Angeles
By Benjamin Hart
The supply-chain crisis, up close.
10/21/2021
politics
politics
House Holds Steve Bannon in Criminal Contempt for Refusing to Testify About 1/6
By Nia Prater
The Justice Department will decide whether to charge him over his refusal to testify in the Capitol riot investigation.
10/21/2021
facebook
facebook
The Next Facebook Will Be an Endless Prison for Humanity. I Can’t Wait.
By Choire Sicha
Building the future one headset and wallet at a time.
10/21/2021
joe manchin
joe manchin
Is Manchin Considering Quitting the Democratic Party?
By Ed Kilgore
The West Virginian wants to issue a credible threat to Democrats to increase his leverage in negotiations over Biden’s agenda.
10/21/2021
sports
sports
Boston Celtics Games Blocked in China After Kanter Calls for a ‘Free Tibet’
By Nia Prater
In a nearly three-minute video, Kanter called Xi Jinping a “brutal dictator” and called for Tibetan independence.
10/21/2021
politics
politics
Trump’s ‘Truth Social’ Bans Telling Truth About His Twitter Rival
By Benjamin Hart
It’s a place where “tweets” are called “truths,” but mockery of the former president’s social-media site is not permitted.