Cereal mascot Tony the Tiger, who has an official Twitter account because that’s how public relations works now, has been beset of late by tweets from furries — fans of anthropomorphic animals who are hot for his anthropomorphic bod. Studly Tony, and the team of marketers behind him, realized they had accidentally beefed up a friendly character who sells Frosted Flakes to kids into a vessel for a very adult sexual fantasy. From a public image standpoint, not exactly grrr-eat.

@realtonytiger I can say this much. Unless I see progress in innocent furs gettin unblocked, not eating from Kelloggs again. #GeneralMills

I’m all for showing your stripes, feathers, etc. But let’s keep things gr-r-reat – & family-friendly if you could. Cubs could be watching 🙂

Can you imagine how many people must have been involved in drafting, workshopping, rewriting, and signing off on this strategic tweet from a corporation controlling an animated tiger to fans who want to imagine that tiger having sex? Best. episode. of. Mad Men. ever.

The drama will blow over eventually, but in the meantime, another mascot and his corporate masters have sensed an opportunity. Chester Cheetah, the sunglasses-sporting Cheetos spokescat, is inclusive, thirsty for brand engagement, and open to experimentation.

@WitchyCats @CasualFennec I welcome all fans to my twitter feed. Scales, feathers, or fur, if you enjoy my tweets then welcome!

Could Chester be the furry community’s new daddy? So far, things are going … okay, as far as I can tell.

Tony the Tiger has forsaken us furries, all hail @ChesterCheetah as the new cat in charge!! He welcomes us with open and cheesy arms!

@ChesterCheetah From one big cat to another, I appreciate the generosity ;)

I'll have to agree @StripeyButt plus @ChesterCheetah tastes way better than @realtonytiger anyways. Tony is only acceptable with milk. 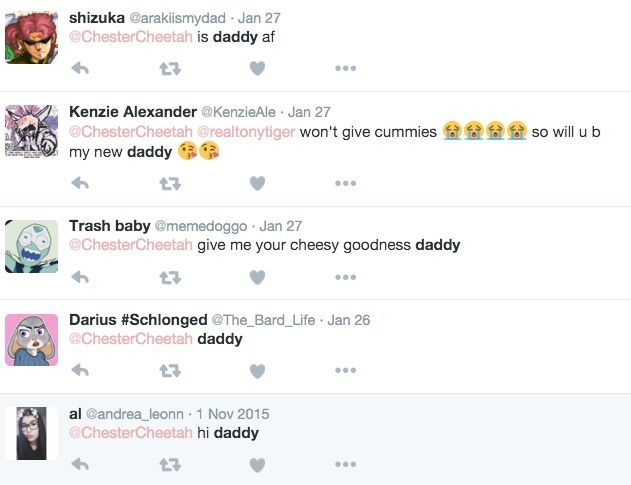 What a time to be alive.

THE FEED
4 mins ago
what we know
what we know
Hurricane Ian Nears Another Landfall in South Carolina
By Intelligencer Staff
Georgia and the Carolinas are under states of emergency in preparation, while Florida struggles to recover.
8 mins ago
politics
politics
New Yorkers Could Get Paid to Report Illegal Parking
By Nia Prater
A proposed bill in City Council would allow people to report instances of illegal parking and receive a cut of the fine.
28 mins ago
tremendous content
tremendous content
Bonkers Revelations From Maggie Haberman’s Trump Book, Ranked
By Margaret Hartmann
If you want more information on Trump being weird with toilets and belittling Jared Kushner, Confidence Man has you covered.