The war between Uber and taxicabs rages on. The high-tech car-service upstart went on the offensive yet again on Friday, slashing its rates for UberX and XL riders in what amounts to a 15 percent drop. It’ll save most riders a few bucks per trip: A ride from the Upper East Side to east midtown, for example, will go from about $14.08 to $11.98 in an UberX. Hey, that’s a soda, at least! 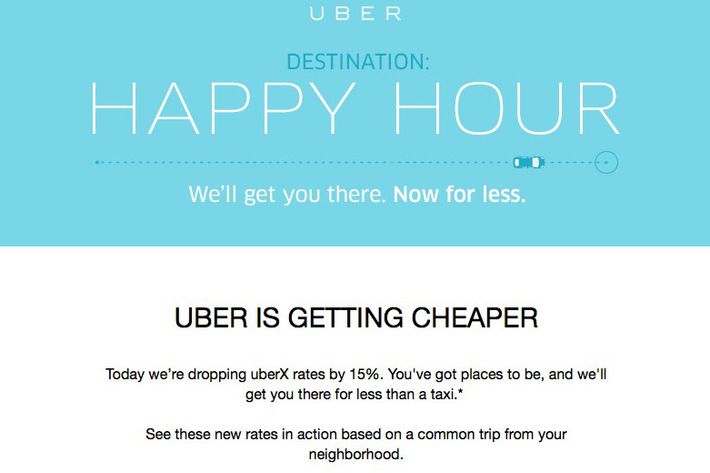 Uber justified the price drop — which, it was quick to point out, puts the rates just a bit below those of a medallion cab — by citing decreased ridership during the winter. The lower prices bring that number back up, and even if drivers are making less per trip, they’ll make up the difference with fewer idle times. (Uber added that if drivers don’t see more riders, it will consider revising the rates again.) The price changes in New York follow other price cuts made by the company in more than 100 cities this month.

Not surprisingly, the city’s cabbies are not happy about any of this. They’re already losing ground to Uber, and this surely won’t help them any. Taxi drivers are planning to protest outside Uber’s headquarters in Queens this afternoon, reports NY1.

This summer, Mayor de Blasio and the City Council floated, and then walked away from, a proposal that would have capped Uber’s expansion. The administration still went ahead with the study, which — when it was released earlier this month — concluded that Uber and other car services didn’t actually increase “overall congestion.” That result, somewhat underplayed by City Hall, was still a victory for Uber on its path to transportation domination.

An Israeli airstrike targeted and destroyed a high-rise building in Gaza City that housed offices of The Associated Press and other media outlets hours after another Israeli air raid on a densely populated refugee camp killed at least 10 Palestinians from an extended family, mostly children, on Saturday. The strike on the high-rise came nearly an hour after the military ordered people to evacuate the 12-story building, which also housed Al-Jazeera, other offices and residential apartments. The strike brought down the entire structure, which collapsed in a gigantic cloud of dust. There was no immediate explanation for why it was attacked.

The earlier Israeli airstrike on the Gaza City refugee camp was the deadliest single strike of the current conflict between Israel and the militant group Hamas. Both sides are pressing for an advantage as cease-fire efforts gather strength. The latest outburst of violence started in Jerusalem and spread across the region over the past week, with Jewish-Arab clashes and rioting in mixed cities of Israel. There were also widespread Palestinian protests Friday in the occupied West Bank, where Israeli forces shot and killed 11 people.

Israel strike in Gaza destroys building with AP, other media
—The Associated Press
9:00 a.m.
the national interest
the national interest
Conservatives Excommunicated the Last Republican President Who Lost
By Jonathan Chait
They know how to brand a failed president as a loser, if they want.
5/14/2021
covid-19
covid-19
The COVID Lab-Leak Hypothesis Just Got a Big Credibility Boost
By Chas Danner
A group of experts published an open letter in Science calling for a new investigation into the origins of the coronavirus.

Biden just officially revoked the executive order for the “National Garden of American Heroes” that Trump signed last year
—@Kevinliptakcnn
5/14/2021
explainer
explainer
What to Know About the Cuomo Investigations and Possible Impeachment
By Chas Danner and Nia Prater
Though he’s the subject of multiple investigations, Governor Cuomo said he’s not resigning and insists, “I did nothing wrong, period.”
5/14/2021
crime
crime
What Happens Next After the Derek Chauvin Verdict
By Nia Prater
A judge ruled that there were several aggravating factors in the murder of George Floyd, which could mean a longer sentence for Derek Chauvin.
5/14/2021
explainer
explainer
What We Know About the Colonial Pipeline Shutdown
By Paola Rosa-Aquino and Chas Danner
The pipeline is now flowing as of 5 p.m. on Wednesday, though the company says it will take several days for supply to return to normal.
5/14/2021
politics
politics
Marjorie Taylor Greene Hassled AOC Inside the Capitol
By Nia Prater
Greene followed Ocasio-Cortez out of the House chamber, accusing her of sympathizing with terrorists. A day later, AOC called her “deeply unwell.”
5/14/2021
politics
politics
House Reaches Agreement on Capitol Riot Commission
By Nia Prater
The bipartisan body will release a report on its findings by the end of the year.
5/14/2021
politics
politics
Millennial MAGA Moderate Replaces Liz Cheney
By Ben Jacobs
Elise Stefanik is no archconservative, but her loyalty to Trump was rewarded with a spot in GOP leadership.
5/14/2021
intelligencer chats
intelligencer chats
The Future of COVID in America
By Benjamin Hart and David Wallace-Wells
Vaccination rates may determine whether the virus becomes a seasonal nuisance sooner rather than later.
5/14/2021