In the battle between Uber and the yellow-cab fleet, the former usually comes out on top. The two institutions are inextricably linked, so it’s unsurprising that new research by the Technology Policy Institute’s Scott Wallsten shows things have changed for New York City’s yellow cabs since Uber’s launch. What’s more surprising is the way in which Uber has affected the yellow-cab industry — namely, it appears to be making cabbies, and cab rides, nicer.

At least that’s what Wallsten’s data suggests. To test the effects of Uber on taxis, he gathered data from the New York City Taxi and Limousine Commission (NYCTLC) on every taxi ride between 2009 and 2014 (more than a billion rides) and used Google Trends to track the popularity of Uber over time. As expected, he found that the total number of taxi trips in New York decreased after Uber entered the market in May 2011. 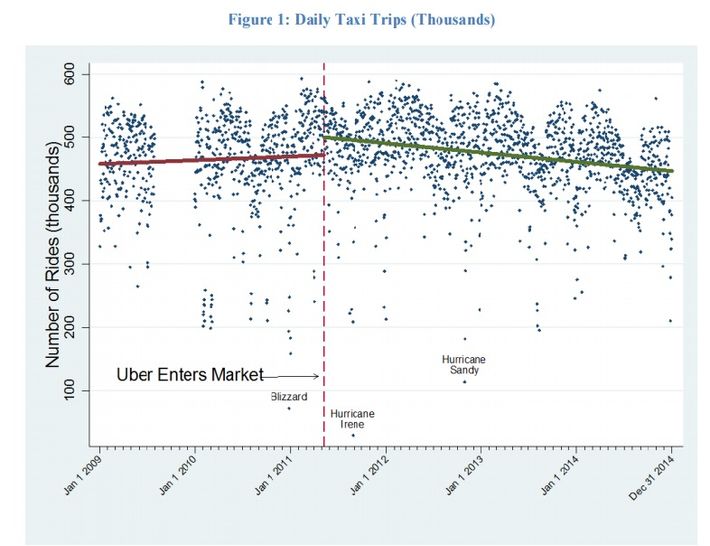 Wallsten’s findings also show that the number of complaints submitted to the NYCTLC decreased as Uber became more popular. “And if we believe that complaints are also correlated to service quality, then the results also suggest that taxi drivers in NYC have made some effort to improve their quality,” he wrote. 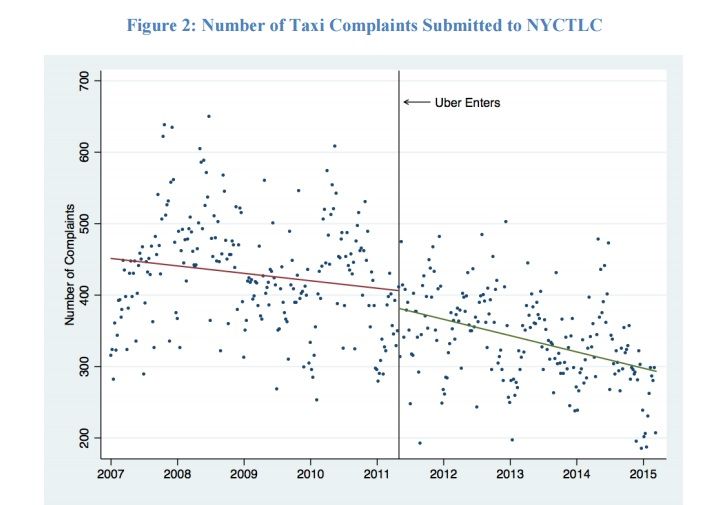 The data he gathered from Chicago’s taxi industry supports this conclusion. Chicago keeps records on the types of things its taxi patrons complain about: air-conditioning, “broken” credit-card machines, rudeness, cell-phone use, and the like. Notably, complaints about those four things (factors cab drivers can actually control) decreased in Chicago as Uber grew, but complaints about traffic and overcharging (things over which drivers have less control) didn’t. In other words, after Uber became a threat, cabbies appeared to be making more of an effort to give their patrons a pleasant trip.

As Wallsten acknowledges, there are problems with using complaints as a measurement: Consumers who file complaints either “experienced truly egregious taxi-related problems, do not place high value on their time,” or “enjoy kvetching.” (The first and last groups constitute a pretty big slice of New York, so maybe it’s not that bad of a sample.) Despite its limitations, his study suggests that even people who choose cabs over Uber benefit from the app.