“In the words of Pete Venkman, ‘I bet you’ll be thinking about me, after I’m gone.’” Photo: Mark Wilson/2016 Getty Images

The White House hinted that this year’s State of the Union address, Obama’s last, wouldn’t include the usual list of boring policy proposals, and the president kicked things off by claiming the speech would be much shorter than usual. Neither of those things turned out to be true, but the address was different — mainly because a significant amount of time was devoted to rebutting the worldview of various GOP presidential candidates. Also, the Statler and Waldorf routine that takes place behind the president was a bit of a letdown; Joe Biden resisted the urge to gesticulate at audience members and new addition Paul Ryan seemed committed to moving as little as possible. Here’s a look at the highs and lows.

Moment When Someone Should Have Shouted “You Lie!”:
“Tonight marks the eighth year that I’ve come here to report on the state of the Union. And for this final one, I’m going to try to make it a little shorter.”

Most Troubling Ad-Lib:
There was no reference to the opioid crisis in Obama’s prepared remarks, but the problem has grown so serious that the president decided to mention it in the first two minutes of his speech. “I hope we can work together this year on some bipartisan priorities like criminal-justice reform, and helping people who are battling prescription-drug abuse and heroin abuse,” he said.

Least Engaged Presidential Candidate:
Though the real winners are Senators Rand Paul and Ted Cruz, who chose not to attend.

Line That Confirms Ted Cruz Was Smart to Skip the Speech:
“The world will look to us to help solve these problems, and our answer needs to be more than tough talk or calls to carpet bomb civilians. That may work as a TV sound bite, but it doesn’t pass muster on the world stage.”

Most Well-Received Jab at Congress:
“We also need benefits, and protections that provide a basic measure of security. It’s not too much of a stretch to say that some of the only people in America who are going to work the same job, in the same place, with a health and a retirement package for 30 years are sitting in this chamber.”

Most Unwanted Shout-Out:
“I also know Speaker Ryan has talked about his interest in tackling poverty. America is about giving everybody willing to work a chance, a hand up, and I’d welcome a serious discussion about strategies we can all support, like expanding tax cuts for low-income workers who don’t have children.”

This was the only reaction Ryan could muster:

The “I Like Voting Rights, But Not Enough to Move.”

Best Tangential Dig at Climate-Change Deniers:
“Sixty years ago, when the Russians beat us into space, we didn’t deny Sputnik was up there. We didn’t argue about the science, or shrink our research and development budget. We built a space program almost overnight, and 12 years later, we were walking on the moon.”

Biggest Surprise Assignment:
President Obama asked Joe Biden to cure cancer, which the vice-president said should be America’s next “moonshot” following his son Beau’s death. “Tonight, I’m announcing a new national effort to get it done,” Obama said. “And because he’s gone to the mat for all of us on so many issues over the past 40 years, I’m putting Joe in charge of mission control.”

Biden told Ryan the task was “news to me.”

Most Suspicious Response to the Line “The United States of America Is the Most Powerful Nation on Earth”:
Do they know something that we don’t?

Best Subtle Trump Attack:
“America has been through big changes before … Each time, there have been those who told us to fear the future, who claimed we could slam the brakes on change, who promised to restore past glory if we just got some group or idea that was threatening America under control. And each time, we overcame those fears.”

Best Obvious Trump Attack:
“We need to reject any politics — any politics that targets people because of race or religion. This isn’t a matter of political correctness. This is a matter of understanding just what it is that makes us strong. The world respects us not just for our arsenal, it respects us for our diversity and our openness and the way we respect every faith. His Holiness, Pope Francis, told this body from the very spot I’m standing on tonight that ‘to imitate the hatred and violence of tyrants and murderers is the best way to take their place.’ When politicians insult Muslims, whether abroad, or fellow citizens, when a mosque is vandalized, or a kid is called names, that doesn’t make us safer. That’s not telling it what — telling it like it is, it’s just wrong. It diminishes us in the eyes of the world. It makes it harder to achieve our goals. It betrays who we are as a country.”

Biggest Sign That There Weren’t Many Trump Supporters in Attendance:
Pretty much everyone in the room was anti-Islamophobia.

Most Self-Deprecating Moment:
“It’s one of the few regrets of my presidency — that the rancor and suspicion between the parties has gotten worse instead of better. I have no doubt a president with the gifts of Lincoln or Roosevelt might have better bridged the divide, and I guarantee I’ll keep trying to be better so long as I hold this office.”

Least Dramatic Performance by a 2015 Meme: 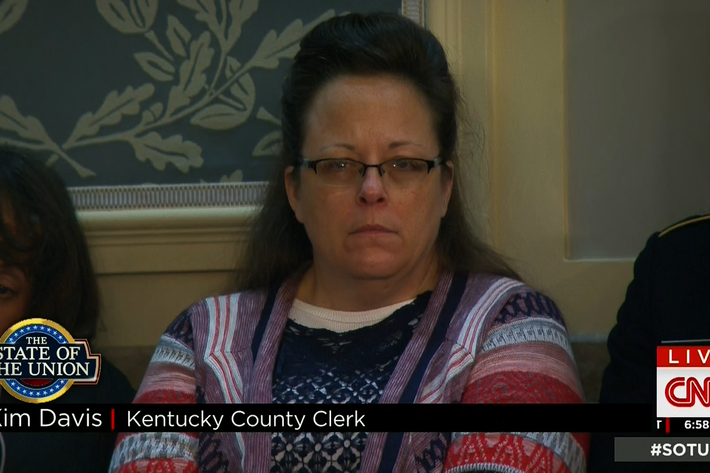 Most Inspiring Call to Action:
“Changes in our political process — in not just who gets elected, but how they get elected — that will only happen when the American people demand it. It depends on you. That’s what’s meant by a government of, by, and for the people.

“What I’m suggesting is hard. It’s a lot easier to be cynical, to accept that change is not possible, and politics is hopeless, and the problem is, all the folks who are elected don’t care, and to believe that our voices and our actions don’t matter. But if we give up now, then we forsake a better future.”

Biggest Signs That Nothing Is Actually Going to Change in Washington: 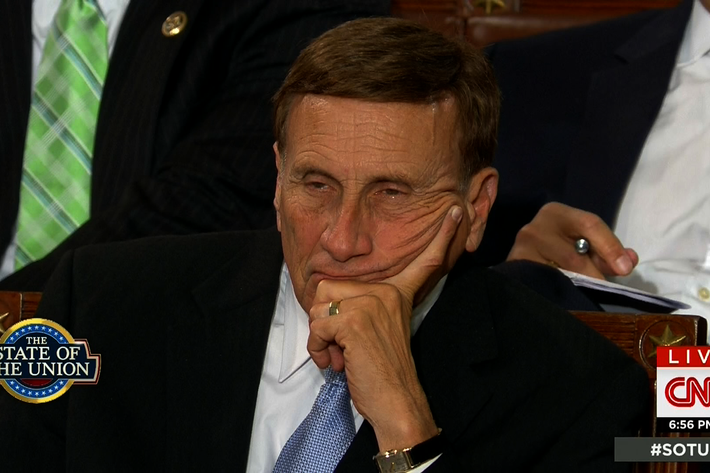 Best Summary of the General Response to the 2016 State of the Union:

THE FEED
7:00 a.m.
life after warming
life after warming
What Climate Alarm Has Already Achieved
By David Wallace-Wells
Joe Biden’s climate plan has its roots in activist wish lists. How did the outsiders win over the insiders?
6:00 a.m.
the grub street diet
the grub street diet
Zohran Kwame Mamdani Lives Off New York’s Street Food
Edited by Chris Crowley
“I’m trying to be the spiciest representative in Albany, so I have to live out my politics.”
All
12:51 a.m.
usps
usps
Trump Requests Mail-in Ballot as He Condemns Voting By Mail
By Matt Stieb
The president has never been one to hold himself to the standards he applies to others.

Trump won’t be thrilled with the newest Trump book

Michael Cohen: “From golden showers in a sex club in Vegas, to tax fraud, to deals with corrupt officials from the former Soviet Union, to catch and kill conspiracies to silence Trump’s clandestine lovers, I wasn’t just a witness to the president’s rise—I was [a]… participant.”
—@kylegriffin1
8/13/2020
vision 2020
vision 2020
All the Juicy Details About Joe Biden’s Vice Presidential Selection Process
By Matt Stieb
Whitmer reportedly attempted to drop out of the vetting process, which involved a team of as many as 15 attorneys scouring the candidates’ pasts.
8/13/2020
coronavirus
coronavirus
CDC Reports COVID-19 Is Eroding Many Americans’ Mental Health
By Matt Stieb
One in four young adults have contemplated suicide during the pandemic, according to a new study by the Centers for Disease Control and Prevention.
8/13/2020
birtherism
birtherism
Trump Revives Racist Birther Conspiracy for Kamala Harris
By Matt Stieb
“I heard it today that she doesn’t meet the requirements,” Trump said of a vice-presidential nominee who was born in Oakland, California.
8/13/2020
labor
labor
Bill de Blasio Is Picking a Fight He Might Not Be Able to Win
By Sarah Jones
The mayor wants to reopen school buildings whether teachers like it or not.
8/13/2020
vision 2020
vision 2020
How Trump Is Trying to Ensure an Early Election Night Lead
By Ed Kilgore
Trump’s demonization of voting by mail has convinced his fans to vote in person, which could skew the early returns and lead to a contested election.
8/13/2020
vision 2020
vision 2020
Supreme Court Lets Rhode Island Relax Voting by Mail Requirements
By Ed Kilgore
After refusing to require accommodations for voting in a pandemic, the Court did allow states to do so themselves.
8/13/2020
foreign interests
foreign interests
UAE Strikes Peace Deal With Israel, Sells Out Palestinians
By Eric Levitz
In exchange for a promise that Israel won’t immediately illegally annex the Jordan Valley, Abu Dhabi normalized relations with the Jewish state.
8/13/2020
coronavirus stimulus
coronavirus stimulus
Stimulus Talks Likely Dead Until September
By Ed Kilgore
Republicans won’t budge on the overall scope and cost of the package, and Democrats feel like they have all the leverage. So nothing’s shaking now.
8/13/2020
covid-19
covid-19
The Coronavirus Was Found on Frozen Chicken Wings
By Erica Schwiegershausen
Chinese authorities say the meat was imported from Brazil.
8/13/2020
vision 2020
vision 2020
Trump Admits He’s Starving the Postal Service to Sabotage Voting by Mail
By Ed Kilgore
Trump is tampering with the November election in plain sight by trying to inhibit perfectly legal voting by mail and plotting to contest a defeat.
8/13/2020
the economy
the economy
As Big Business Feasts on Cheap Credit, Small Firms Starve
By Eric Levitz
And Congress isn’t coming to the little guys’ rescue anytime soon.
8/13/2020

Steep personnel cuts could be coming to NYC municipal employees

“If you’re going to keep cutting and keep cutting, it has to at some point reach personnel. It’s just pure logic of budgets, and it’s very sad logic. I don’t like it one bit, and I want to avert this at all costs. So that 22,000 number is painfully real,” he said.

De Blasio has been hoping for a multi-billion dollar federal aid package to bail out the city after the coronavirus pandemic decimated its bottom line. But he acknowledged Wednesday that “appears to be dead now.”

This qualifies as good news now

U.S. jobless claims come in at 963,000. First week in months they’ve been below a million. @BloombergRadio
—@nhageradio
8/13/2020
pandemic prescriptions
pandemic prescriptions
The European Cities Using the Pandemic As a Cure for Airbnb
By Vincent Bevins
With tourism at a low ebb, Lisbon, Barcelona, and other cities are moving to bring balance back to their housing market.
8/13/2020

Yet another grim milestone

On Wednesday, the country reported its highest number of deaths in a single day since mid-May, at nearly 1,500. The country has now seen its seven-day average of newly reported deaths remain above 1,000 for 17 consecutive days.

… In the letters, “Kim describes the bond between the two leaders as out of a ‘fantasy film,’ as the two leaders engage in an extraordinary diplomatic minuet,” according to a description of the book posted on Amazon.

After complaints from President Trump that he can’t wash his “beautiful hair properly” due to “drip, drip, drip” shower heads, the Trump administration is *formally* moving to roll back shower head regulations set in 1992 by Pres. George HW Bush.https://t.co/HbXpOpQf5O
—@SteveKopack
8/12/2020
ghislaine maxwell
ghislaine maxwell
Ghislaine Maxwell Complains About Conditions in Brooklyn Jail
By Benjamin Hart
Following the suicide of Jeffrey Epstein, guards are apparently not taking any chances with his alleged fixer.
8/12/2020
coronavirus stimulus
coronavirus stimulus
Will We Get a Second Round of COVID-19 Stimulus Checks?
By Ed Kilgore
Dems called for another round of $1,200 checks, and now the GOP is proposing something similar. But the timing is iffy and negotiations are complex.
8/12/2020

NEW- Kanye West met with Jared Kushner last weekend in CO, as West continues with an effort he has indicated is aimed to harm Biden. https://t.co/DsVj58HrnS
—@maggieNYT