If there’s one thing you can say about ISIS, besides the fact that it’s a medieval death cult responsible for inconceivable blood crimes, it’s that its recruiters are very charming on social media. But don’t worry: The Federal Bureau of Investigation is ready to fight back. It used your tax dollars to create Don’t Be A Puppet, a website for educating teens on violent extremism and the ways that online recruiters make contact. I took the site for a spin yesterday to earn an online certificate (really) in “countering violent extremism,” and quickly discovered: The FBI is bad at talking to teens.

The site’s main tactic for teaching its users about violent extremism is a set of quizzes, which cover not just international groups like ISIS but also white supremacists and that scourge of 21st-century America, environmental extremists.

You’ll realize that we’re working with something special when you arrive at this, the FBI’s mockup of a teen’s computer screen. You know, Just Teen Things: hundreds of lines of HTML and CSS. 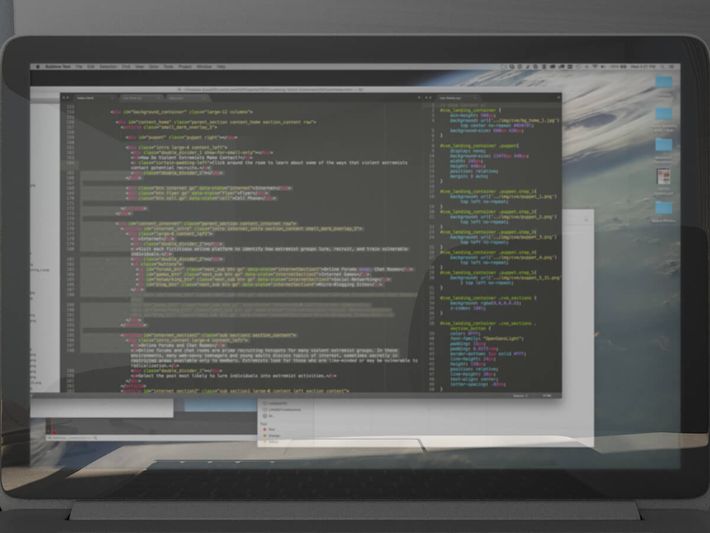 My favorite portion of the site is for quizzes that help teens identify which sorts of online posts might actually be recruiters in disguise.

Which one of these fake Reddit posts is actually an ISIS recruiter in disguise? Tricky, right? (It’s the post about justifiable bombings.) 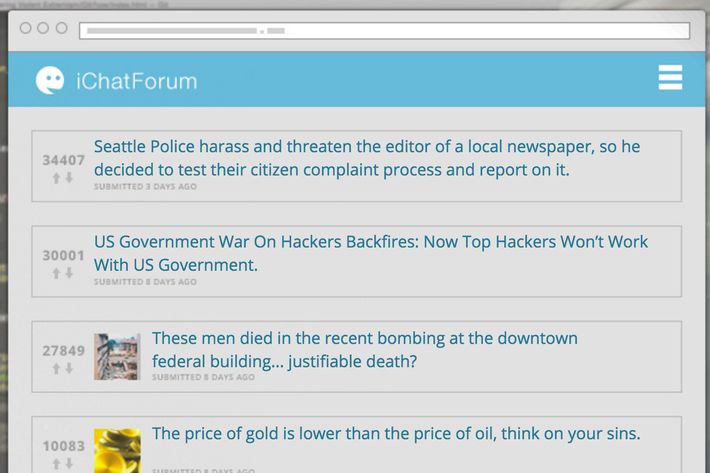 This one’s great. Here is what the FBI believes: that violent extremists will go through the process of developing a video game and passing certification on digital distribution platform Steam — sorry, “Water Gas” — just to get new members. 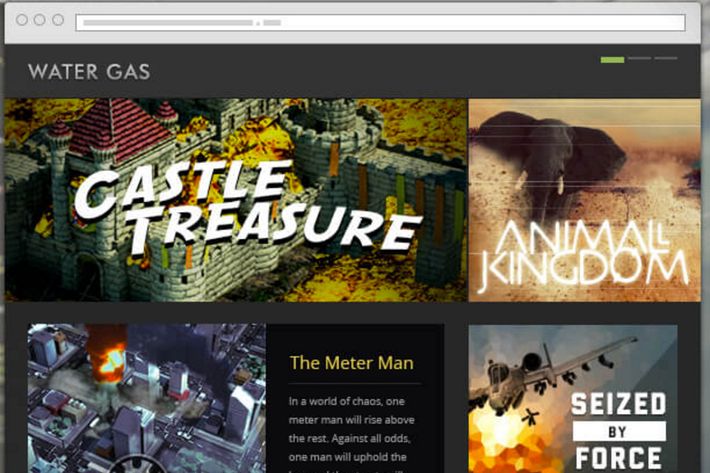 Developing a video game as a propaganda tool and distributing it on Steam? Who would do something like that?

“Mr. Falcon” needs your help. Which of his friends has trouble correctly using quotation marks? 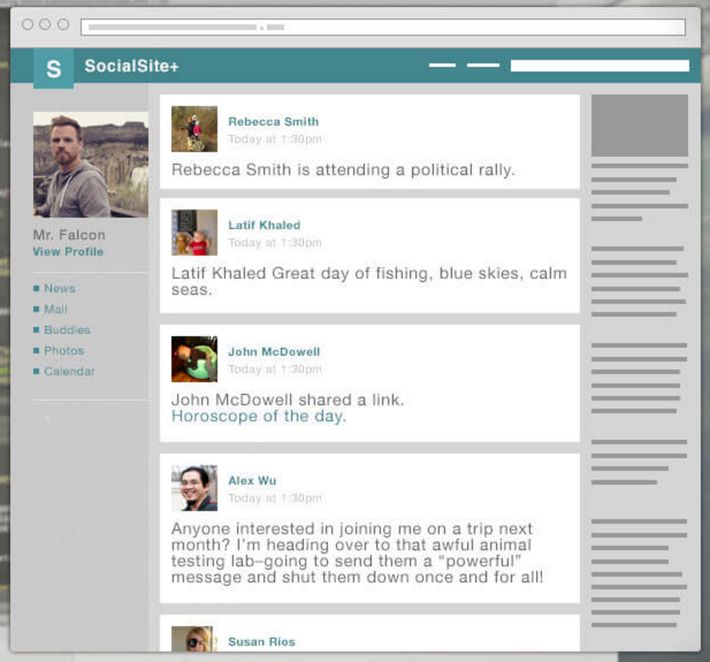 This next one is hard. Which of your “Blastoff” friends is a violent extremist? 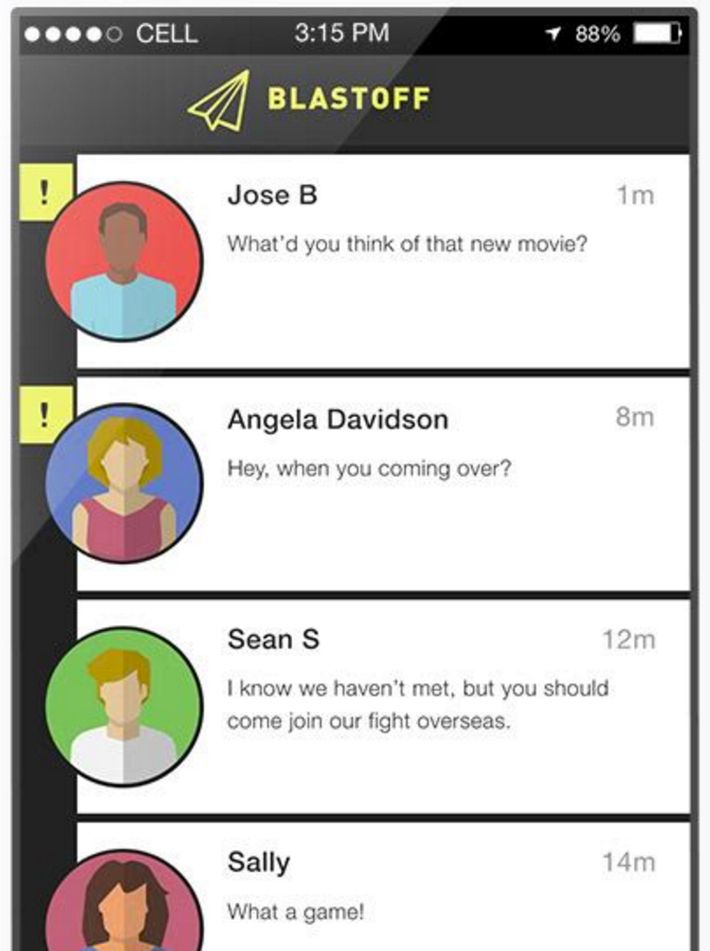 “I know we haven’t met, but you should come join our fight overseas.” Boom. That’s an incredibly strong opener. Sean’s a violent international extremist, but he won’t waste your time.

Finally, after completing all of the quizzes, you get a neat certificate with a creepy mannequin image. 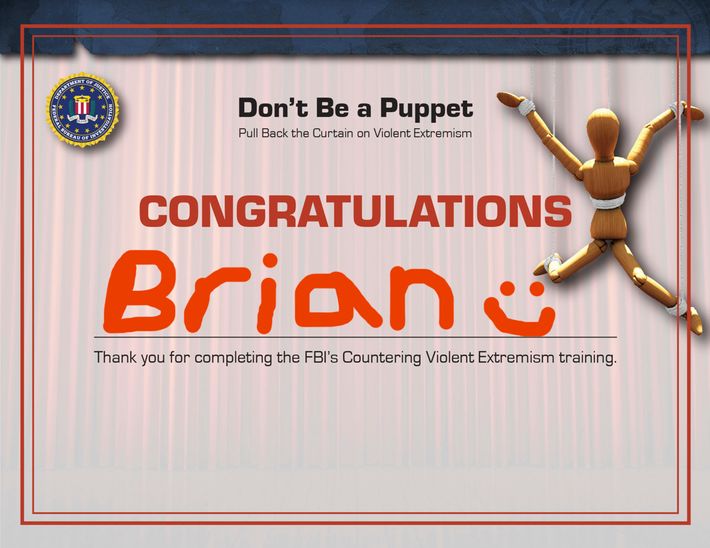 The FBI Made a Site to Protect Teens From ISIS

THE FEED
1/18/2021
inauguration liveblog
inauguration liveblog
A Tense Nation Waits for Inauguration Day: Live Updates
By Intelligencer Staff
D.C. remains on edge with tens of thousands of National Guard troops providing security. Meanwhile, Trump prepares to move out.
1/18/2021
coronavirus
coronavirus
New COVID Strain Spreading Across U.S.: What We Know
By Matt Stieb
As public-health officials warn that the U.K. COVID strain could soon become common in the U.S., an unrelated variant has been found in California.
1/18/2021
politics
politics
Could Trump’s Going Away Ceremony Be a Ghost Town?
By Matt Stieb
Reported invites from the final event of Trump’s presidency suggest there are concerns it may be poorly attended.

1/18/2021
politics
politics
How Close Did We Get to an Election Coup?
By Ed Kilgore
At several moments, Trump’s efforts to overturn Joe Biden’s victory were scarily close to success. Fortunately, he was too incompetent to pull it off.
1/18/2021
the national interest
the national interest
Trump Wanted to Erase Obama’s Legacy. He Failed.
By Jonathan Chait
Almost every Obama achievement Trump tried to negate has remained.
1/18/2021
the end stage
the end stage
Trump Plans to Issue at Least 100 Pardons and Commutations on Tuesday
By Chas Danner
He is also reportedly still considering whether or not to try to preemptively pardon himself and his family members and aides.
1/17/2021
capitol riot
capitol riot
Multiple Extremist Group Members Arrested: Live Updates
By Intelligencer Staff
The FBI is continuing to round up rioters who stormed the U.S. Capitol. Meanwhile, Sunday’s state capitol protests were a non-event.
1/17/2021

Keystone XL may soon be out of stock

U.S. president-elect Joe Biden has indicated plans to cancel the Keystone XL pipeline permit via executive action on his first day in office, sources confirmed to CBC News on Sunday. A purported briefing note from the Biden transition team mentioning the plan was widely circulated over the weekend after being shared by the incoming president’s team with U.S. stakeholders. The words “Rescind Keystone XL pipeline permit” appear on a list of executive actions supposedly scheduled for Day 1 of Biden’s presidency.

Aleksei A. Navalny, the Russian opposition leader who recuperated in Germany from a near-deadly poisoning, returned to Moscow on Sunday and was detained shortly after leaving his plane. The detention of Mr. Navalny could set off an international backlash and protests at home. He has accused the Kremlin of trying to murder him in YouTube videos viewed more than 40 million times.

Russia’s penitentiary service, which has said that Mr. Navalny was wanted for violating the terms of a prior suspended sentence, released a statement saying that Mr. Navalny had been detained pending a court hearing. …

Before he was detained at passport control, Mr. Navalny gave an impromptu statement to journalists. He stood in the transit area of the airport’s Terminal D, before a lit-up screen showing a photo of the Kremlin, and apologized to air travelers inconvenienced by the air-traffic tumult surrounding his arrival. “I am not afraid,” he said in remarks carried by Russian news media livestreams from the scene. “I know that I am right. I know all the criminal cases against me are fabricated.”

Ellis had been selected for the job in November by the Pentagon general counsel after a civil service competition. But Nakasone was not in favor of Ellis’s selection and sought to delay his installation, according to several people familiar with the issue, who spoke on the condition of anonymity because of the matter’s sensitivity. …

Ellis was selected under pressure from the White House, people familiar with the matter said at the time. The move drew criticism from national security legal experts as an attempt to politicize a career position.

The NSA is ‘moving forward’ to install Michael Ellis, a former GOP operative, as its top lawyer, the agency said Sunday
—The Washington Post
1/17/2021
the money game
the money game
What Explains Bitcoin’s Resurgence?
By Nic Carter
Written off for dead by many after falling 90 percent, the cryptocurrency is back at all-time highs. Believe it or not, a lot has changed.
1/17/2021
how we live now
how we live now
What Has the Pandemic Done to Our Eyes?
By Eve Peyser
Humans weren’t meant to stare at screens.
1/16/2021

My personal favorite lie: Trump was once named Michigan’s Man of the Year

Trump has never lived in Michigan. Why would he have been named Michigan’s Man of the Year years before his presidency? He wouldn’t have been. He wasn’t. And yet this lie he appeared to have invented in the final week of his 2016 campaign became a staple of his 2020 campaign, repeated at Michigan rally after rally. It’s so illustrative because it makes so little sense.

The 15 most notable lies of Donald Trump's presidency
—CNN’s Daniel Dale
1/16/2021
end times
end times
Trump’s Job Approval Plunging as He Leaves Office
By Ed Kilgore
Trump’s support is in free fall, but is high enough among Republicans to keep them from dumping him. Biden enters office with a bit of a honeymoon.
1/16/2021
politics
politics
Even the Guy the MyPillow CEO Wanted to Enlist for a Coup Is Confused
By Ben Jacobs
The mattress mogul might have handed Trump a plan for holding onto power. One of the people named has no idea what’s going on.
1/16/2021
end-times
end-times
How BidenWorld Is Scrambling to Prepare for January 21
By Gabriel Debenedetti
His much-needed recovery agenda will have to weave its way through a Washington that is about to be increasingly distracted by Trump’s re-impeachment.
1/16/2021
end-times
end-times
The Most Important Takeaways From Big Tech’s Deplatforming of Trump
By Scott Galloway as told to James D. Walsh
Between San Francisco and Washington, the power shifts by the day.
1/16/2021
end-times
end-times
What Madison Cawthorn Saw at the Insurrection
By Olivia Nuzzi
The youngest member of Congress is invigorated by the mob he helped incite
1/15/2021
end-times
end-times
Trump Is on the Verge of Losing Everything
By Jonathan Chait
A broken president leaves the White House twice impeached, on the brink of bankruptcy, and criminally exposed.
1/15/2021
stimulus checks
stimulus checks
Will We Get a Third Round of Stimulus Checks?
By Ed Kilgore
With Democrats controlling Congress and the White House, odds are high for more stimulus and a third check. But timing will be tricky.
1/15/2021
covid vaccines
covid vaccines
The Vaccine Stockpile the White House Released This Week Doesn’t Exist: Report
By Chas Danner
The Trump administration had already depleted the vaccine stockpile it said it would release, sowing more confusion for state and local authorities.
1/15/2021
intelligencer chats
intelligencer chats
The Biggest Hopes and Fears for Biden’s Early Days
By Intelligencer Staff
A chat about our post–January 20 future.
1/15/2021
covid stimulus
covid stimulus
The Good, the Bad, and the Odd in Biden’s Stimulus Plan
By Eric Levitz
Uncle Joe is turning the money printer up to 11 — at least, if 10 Senate Republicans let him.
1/15/2021

Trump will depart Washington on Wednesday morning before Biden is sworn in, becoming the first modern-day president to skip his successor’s inauguration.

Instead, Trump will attend an unprecedented farewell event at Joint Base Andrews outside Washington, where Air Force One is kept. No recent president has had his own sendoff ceremony at Andrews.

1/14/2021
Everything We Know About Joe Biden’s Inauguration
By Charlotte Klein and Margaret Hartmann
1/15/2021
crime
crime
The Last Man Set to Be Executed by the Trump Administration
By Claire Lampen
What to know about Dustin Higgs, the final person scheduled to be killed in Trump’s cruel and unprecedented execution spree.
1/15/2021
biden administration
biden administration
All of President-elect Joe Biden’s Cabinet Nominees
By Intelligencer Staff
A running list of Biden’s announcements and reported picks as the incoming administration begins to take shape.
1/15/2021
coronavirus vaccine
coronavirus vaccine
How to Sign Up for a COVID Vaccine in New York
By Matt Stieb
After a sluggish start, New York is ramping up vaccination efforts, making more people eligible for the shot and opening new mass vaccination sites.
1/15/2021

Don’t believe the rumors: Trump and Giuliani are still pals (though it’s unclear if Trump is paying his legal fees)

When Rudolph W. Giuliani was treating his efforts to carry out President Trump’s wishes to overturn the results of the 2020 presidential election as a payment opportunity — he proposed a daily retainer of $20,000 for his legal services from the burgeoning Trump campaign legal fund — the president dismissed it and responded by demanding to personally approve each expense.

Nine weeks and another impeachment later, Mr. Trump began the day on Thursday by asking aides to erase any sign of a rift. Stripped of his Twitter account, Mr. Trump conveyed his praise through an adviser, Jason Miller, who tweeted: “Just spoke with President Trump, and he told me that @RudyGiuliani is a great guy and a Patriot who devoted his services to the country! We all love America’s Mayor!”

White House officials are universally angry with Mr. Giuliani and blame him for both of Mr. Trump’s impeachments. But the president is another story.

Even as he complains about Mr. Giuliani’s latest efforts as fruitless, the president remains unusually deferential to him in public and in private. “Don’t underestimate him,” Mr. Trump has told advisers.

But only up to a point. While Mr. Trump and his advisers balked at the $20,000 request weeks ago, it is unclear whether the president will sign off on Mr. Giuliani being paid anything other than expenses.