Did not like, Knicks say. Photo: Al Bello/Getty Images

At the moment, the Twitter account belonging to interim Knicks coach Kurt Rambis shows just five “liked” tweets — none of which is particularly noteworthy. (An example: A man in Kentucky says he once reached out to Rambis with a basketball question during grad school and that Rambis was kind enough to respond.) But over the weekend, someone on Twitter noticed that Rambis’s account had liked a tweet from user @ilike2touch_ that read “Love female masturbation #NSFW.” The tweet also included an image that was, indeed, #NSFW. But a Knicks spokesperson tells the Daily News that Rambis wasn’t responsible for the “like,” and that his account was hacked and/or spammed. 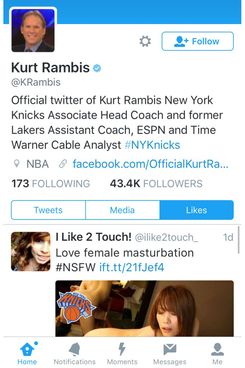 “Kurt did not like those items on his Twitter page and we worked with Twitter to make sure the situation did not happen again,” said Jonathan Supranowitz, the team’s vice-president of public relations. He also pointed out that Rambis’s account had “liked” a tweet about money-lending on which, similarly, Rambis had not actually clicked “like.”

The Daily News took the opportunity to further scrutinize Rambis’s Twitter activity and noted that he still follows the user @GreatAssDaily.

This much is clear: It’s been a strange season to be a Knicks PR rep, even by Knicks standards.

THE FEED
10:51 a.m.
what we know
what we know
Texas School Shooting Investigation Descends Into a Mess
By Intelligencer Staff
Officials give contradictory statements and parents say they were ignored and arrested trying to save their children.
10:50 a.m.
the national interest
the national interest
Republicans Block Bill to Monitor Their Violent Allies
By Jonathan Chait
“Domestic extremists — hey, that’s us!”
8:00 a.m.
just asking questions
just asking questions
A Different Way to Prevent Mass Shootings
By Benjamin Hart
Talking with Mark Follman, whose new book explores how behavioral threat assessment could help a country paralyzed by gun violence.