Despite promising to give away 99 percent of his fortune, Mark Zuckerberg is still pretty well off. As of Tuesday, thanks to Facebook, Inc.’s improbably rising shares, he is officially the fourth-richest person in the world. According to Bloomberg Businessweek, Zuckerberg was worth $50 billion by the close of regular trading in New York, which catapulted him past Mexican businessman Carlos Slim and Amazon CEO Jeff Bezos in the billionaire rankings. In fact, despite the stock market’s generally crappy performance in 2016, Facebook shares have somehow managed to rise 9.5 percent, making it the fourth-most-valuable company in the world after Apple, Alphabet (formerly known as Google), and Microsoft. 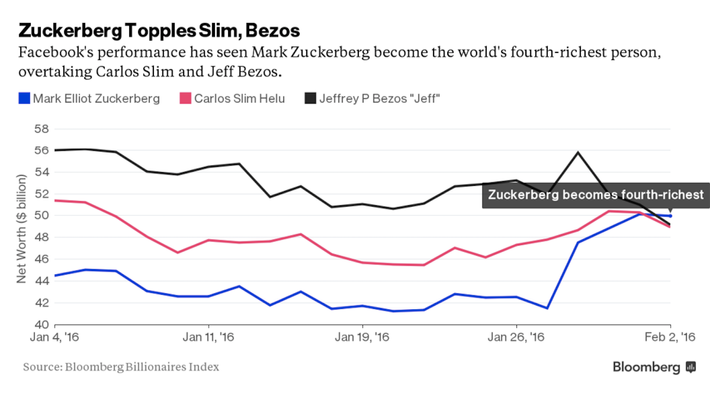 Poor Bezos has fallen victim to lackluster markets this year; according to Businessweek, “an 18 percent decline this year for Amazon has cut $10.6 billion from Bezos’s fortune, leaving him with $49.1 billion.” Perhaps he’s been too busy investing in the digital reinvention of a legacy publication to watch the throne. As for Slim, he’s reportedly lost $3.3 billion as a result of the economic crisis in Brazil, which is usually a source of profit for his company América Móvil. So far, Zuckerberg is the “only billionaire among the world’s five richest whose fortune has increased this year.” Time to pick up a few more shirts!

THE FEED
9:00 a.m.
the money game
the money game
Why Your Group Chat Could Be Worth Millions
By Max Read
If you turn it into a DAO, that is. But what’s a DAO? It’s a little bit cryptocurrency, a little bit gamer clan, a little bit pyramid scheme.
10/23/2021
facebook
facebook
What Was Leaked in the Facebook Papers?
By Chas Danner
A guide to the newly reported revelations from a trove of internal company documents shared by a company whistleblower.
10/23/2021
immigration
immigration
U.S. Border Arrests Hit All-Time High
By Paola Rosa-Aquino
About 1.7 million migrants were detained while attempting to cross into the U.S. over the last 12 months.

F.D.A. Says Pfizer Vaccine’s Benefits Outweigh Key Risks in Children 5 to 11
—The New York Times
10/23/2021
past is prologue
past is prologue
Politics Was Riddled With Celebrities Long Before Trump
By Ed Kilgore
Actors, musicians, and athletes entering U.S. politics isn’t a new trend — in fact, it may be one of the oldest.
10/22/2021
crime and punishment
crime and punishment
Giuliani Ally Lev Parnas Convicted of Making Illegal Campaign Donations
By Chas Danner
The one-time major player in Trump’s Ukraine scandal is going to prison on unrelated campaign-finance charges.
10/22/2021
abortion
abortion
Texas Abortion Law Likely to Stay in Place Until Court Deals With Roe v. Wade
By Ed Kilgore
All roads now appear to be converging on the Supreme Court’s big upcoming decision.
10/22/2021
pivot
pivot
Facebook May Be Mendacious, But It’s Not Stupid
By Intelligencer Staff
A company name change could serve Mark Zuckerberg’s interests well.
10/22/2021
mike pence
mike pence
For Mike Pence, Running a Doomed Presidential Race Is a Living
By Ed Kilgore
The former veep doesn’t have to be a plausible presidential candidate to stay on the gravy train.
10/22/2021
the city politic
the city politic
City Hall Starved Taxi Drivers Before They Went on Hunger Strike
By Errol Louis
How driving a cab became a dead end.
10/22/2021
explainer
explainer
What to Know About Booster Shots, Now
By Paola Rosa-Aquino and Chas Danner
Countless Americans are now eligible for a booster dose of any of the three U.S.-authorized COVID vaccines.
10/22/2021
public safety
public safety
The Police’s Farcical War on Vaccine Mandates
By Zak Cheney-Rice
It turns out cops may not have a special appreciation for the sanctity of life after all.
10/22/2021
politics
politics
Anybody Can Be Joe Manchin Right Now
By Ben Jacobs
A clutch of Democrats threaten to torpedo Biden’s agenda unless he agrees to lower taxes for middle-class blue-staters.
10/22/2021
build back better
build back better
The Democrats Have a Collective-Action Problem
By Eric Levitz
Can Joe Biden’s agenda survive the competing claims within his own party?
10/22/2021
covid-19
covid-19
Booster Shots Are Now Approved for All of the COVID Vaccines
By Nia Prater
Additional dose recommended for all with J&J and many who got Moderna, with “mix and match” allowed for all varieties.
10/22/2021
new york
new york
Chuck Schumer Endorses India Walton for Buffalo Mayor
By Matt Stieb
A major Establishment boost for the socialist candidate.
10/21/2021
rikers island
rikers island
New Photos Show Horrific Overcrowding at Rikers Island
By Matt Stieb
Pictures obtained by the New York Post show up to 26 men held in a cell meant for a single detainee amid deteriorating pandemic conditions.
10/21/2021
the money game
the money game
What’s the Deal With Donald Trump’s SPAC?
By Michelle Celarier
After a surprise announcement, a Trump-linked stock skyrocketed — tripling in price and drawing in waves of retail investors.
10/21/2021
the sports section
the sports section
Baseball Teams Should Get to Pick Their Playoff Opponents
By Joe DeLessio
It’s much more fair-minded than the current system — and much more fun.
10/21/2021
the economy
the economy
Behold the Insane Traffic Jam at the Port of Los Angeles
By Benjamin Hart
The supply-chain crisis, up close.
10/21/2021
politics
politics
House Holds Steve Bannon in Criminal Contempt for Refusing to Testify About 1/6
By Nia Prater
The Justice Department will decide whether to charge him over his refusal to testify in the Capitol riot investigation.
10/21/2021
facebook
facebook
The Next Facebook Will Be an Endless Prison for Humanity. I Can’t Wait.
By Choire Sicha
Building the future one headset and wallet at a time.
10/21/2021
joe manchin
joe manchin
Is Manchin Considering Quitting the Democratic Party?
By Ed Kilgore
The West Virginian wants to issue a credible threat to Democrats to increase his leverage in negotiations over Biden’s agenda.
10/21/2021
sports
sports
Boston Celtics Games Blocked in China After Kanter Calls for a ‘Free Tibet’
By Nia Prater
In a nearly three-minute video, Kanter called Xi Jinping a “brutal dictator” and called for Tibetan independence.
10/21/2021
politics
politics
Trump’s ‘Truth Social’ Bans Telling Truth About His Twitter Rival
By Benjamin Hart
It’s a place where “tweets” are called “truths,” but mockery of the former president’s social-media site is not permitted.
10/21/2021
the national interest
the national interest
Biden Has Two Long-Shot Plans to Placate Kyrsten Sinema
By Jonathan Chait
Hail Mary time.