Everyone is so mad about the possibility that Twitter might show tweets in nonchronological order that people are willing to believe anything about what the new timeline might look like — even if it’s a fake screenshot from a Weird Twitter jokester. Consistently delightful internet poster Leon Chang (@leyawn) got Mashable to publish an article Tuesday based on some Photoshopped jokes he made.

here's the new algorithmic timeline. i've had it for a few weeks. you can opt in to most recent each time you log in pic.twitter.com/lJw7uQuE5n

Note that the “top tweets” include a joke from Weird Twitter personality @Dril and a tweet that just says “fuck ass crapper.” (This is a small meme that was going around at the time.)

And this tweet, also cited in the Mashable article, is a joke about how an algorithmic timeline might promote the already-powerful at the expense of people with fewer followers:

@leyawn cool thing about Top Tweets: i almost never see tweets now from people who don't get a lot of rts or likes

Ulanoff interviewed Chang as if his screenshot were real, and Chang just rolled with it, telling Ulanoff that he must have been picked to test the new timeline because he’s “some kind of power user.”

And he provided a new fake screenshot. It looks like this: 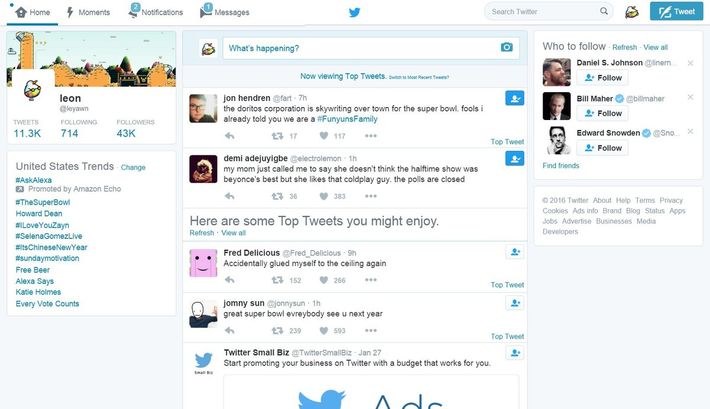 Upon realizing the mistake, Mashable updated the post to remove all the Leon content and added this note at the top: “Mashable has learned that the screen shot from Twitter user @leyawn was fabricated. As a result, we’ve decided to remove all references to his details about the Twitter timeline test as there is now no way to verify their accuracy. Mashable apologizes for this error.”

If it’s any comfort to Mashable, though, everyone makes mistakes. The New York Times once quoted a prank interview with someone who uses the Twitter handle @weedhitler.