On Thursday, pharmaceutical executive and supervillain Martin Shkreli testified before Congress using only obnoxious facial expressions and invocations of the Fifth Amendment. Friday morning, he had apparently updated his OKCupid profile to include “eye rolls” on the list of things he’s really good at.

It’s not news that Shkreli, arguably the most-hated man in America today, uses online-dating services. In September, writer Eve Peyser matched with Shkreli on Tinder not long after she had written an article mocking his OKCupid profile.

This morning, BuzzFeed creative director Alix McAlpine noticed that Shkreli’s still on OKCupid months later, as his popularity is arguably at an all-time low and his punchability is definitely at an all-time high.

“Not today, Satan,” she tweeted.

Let’s take a quick look at how Shkreli — who once claimed he received “50-100 date solicitations a day” — has changed his approach to dating as his bad reputation has grown. 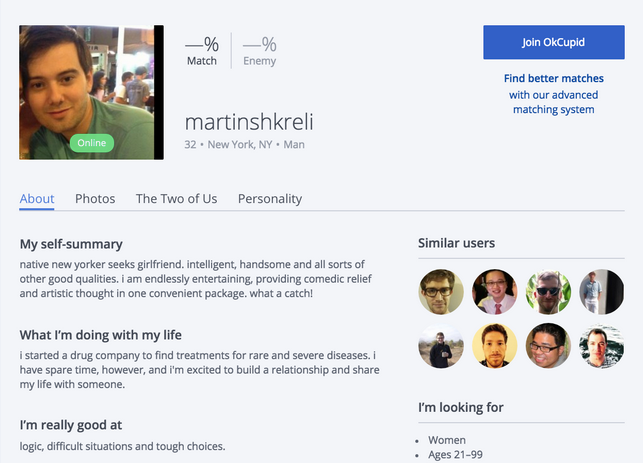 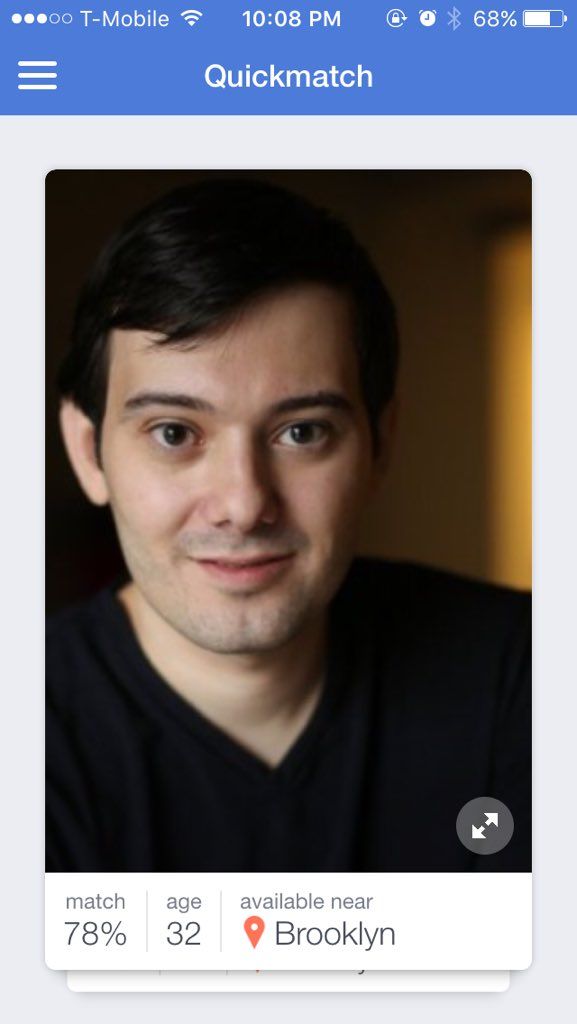 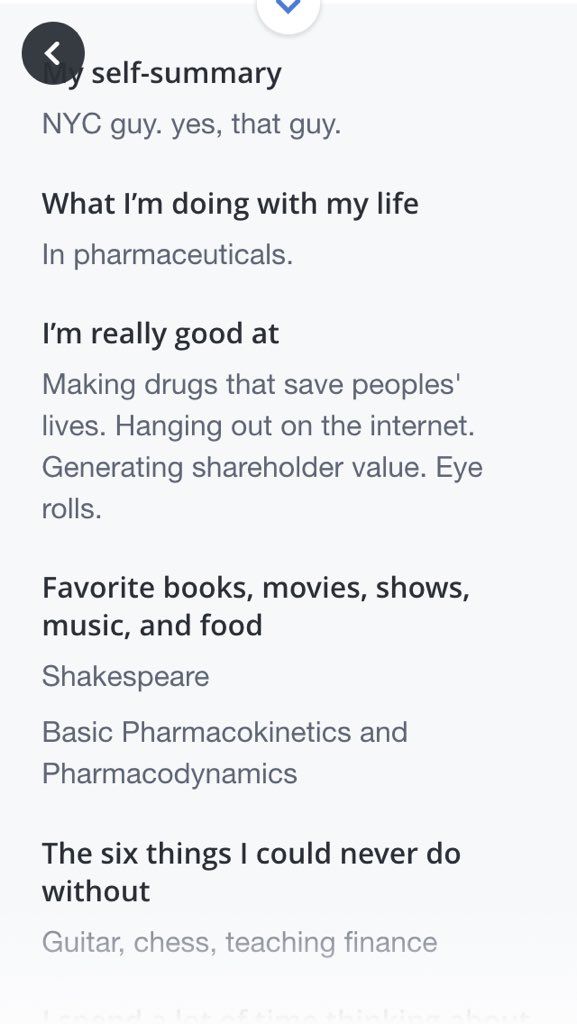 As you can see, Shkreli has embraced his newfound infamy. His profile now assumes potential mates will recognize him as a small Lex Luthor with better hair — or, as he puts it, “that guy.” He no longer discusses his aspirations of building a life with someone, or boasts about being funny and intelligent.

And, of course, there’s his new specialization in “eye rolling.” If he added that to his résumé after the congressional hearing, it’s the latest in a long line of bratty troll moves that seem calculated to make Shkreli appear like a cartoon bad guy — including threatening to remove Ghostface Killah from the one-of-a-kind Wu-Tang Clan album he won at auction.

It would almost be funny, and maybe even worth going on a date with him for the novelty, if he hadn’t jacked up the price of a life-saving drug used by AIDS patients.

1:14 p.m.
side effects
side effects
Why the Second COVID Shot Makes You Miserable
By Jeff Wise
Unpleasant side effects are in part a consequence of lightning-quick vaccine development.
12:04 p.m.
foreign interests
foreign interests
Withdrawing From Afghanistan Is Biden’s Least Bad Option
By Jonah Shepp
The pullout of U.S. troops will likely have tragic consequences for Afghans, but remaining indefinitely offers no clear path to victory.
10:00 a.m.
politics
politics
5 Revelations From John Boehner’s New Memoir
By Jonann Brady
In On the House, the former Speaker praises Nancy Pelosi’s “killer instinct,” unloads on Ted Cruz, and claims Mark Meadows once begged on his knees.
9:27 a.m.
intelligencer chats
intelligencer chats
What the Mainstreaming of Crypto Means for Normies
By Benjamin Hart and Jen Wieczner
Digital currencies are likely to become more intertwined with everyday life.
8:00 a.m.
politics
politics
The GOP’s Barebones America
By Sarah Jones
Behind a narrow definition of infrastructure lies a narrow vision for the country.
7:58 a.m.
mass shootings
mass shootings
8 Killed in Shooting at FedEx Warehouse in Indianapolis
By Margaret Hartmann
At least five other people had been hospitalized with injuries, including one in critical condition. Police said the gunman killed himself.
7:00 a.m.
capitol hill
capitol hill
Chuck Schumer Has Changed
By Gabriel Debenedetti
Why is the former “angry centrist” pushing his party to go bigger, bolder, and more progressive?
4/15/2021
nyc mayoral race
nyc mayoral race
The New York City Mayoral Race Is Starting to Get Petty
By Matt Stieb
In the nation’s largest city, leading mayoral candidates Andrew Yang and Eric Adams squabbled on Thursday over New York officials’ parking habits.
4/15/2021
vision 2020
vision 2020
Yes, Geographical Polarization Was a Big Deal in 2016 and 2020
By Ed Kilgore
New data shows that the suburban swings to the left and rural swings to the right are consistent with the intuitive trends in the last two elections.
4/15/2021
crime
crime
Why Do Tasers Look Like Guns Anyway?
By James D. Walsh
Daunte Wright’s killer is not the first law-enforcement officer to confuse the two, often with deadly consequences.
4/15/2021
police shootings
police shootings
Video Shows Chicago Police Shooting and Killing 13-Year-Old With His Hands Up
By Intelligencer Staff
The Chicago agency investigating police shootings released the graphic footage of an officer shooting Adam Toledo, whose hands were raised.
4/15/2021
infrastructure
infrastructure
GOP to Biden: Raise Taxes on Our Rural Base, Not Coastal Elites
By Eric Levitz
Biden wants to fund infrastructure with taxes on the (largely coastal) corporate elite. Republicans insist on soaking their own base instead.
4/15/2021
coronavirus
coronavirus
Israel Drops COVID Rule Requiring Masks Outdoors
By Matt Stieb
It’s a milestone for one of the nations to roll out the vaccine the fastest, though vaccination rates in Palestine lag significantly.
4/15/2021
extremism
extremism
McConnell Howls About Court-packing Just As Pelosi Nixes It
By Ed Kilgore
It’s a good example of how smears of the opposing party can run abruptly into countervailing reality.
4/15/2021
minnesota
minnesota
Is This a Community?
By Zak Cheney-Rice
Despite their rhetoric, the Brooklyn Center police have an open disinterest in actual community with city residents.
4/15/2021
climate change
climate change
New York Magazine’s David Wallace-Wells Testifies Before the Senate on Climate
By Paola Rosa-Aquino
Author of The Uninhabitable Earth on the cost of inaction.
4/15/2021

“The routine surgery was successful, and he is expected to fully recover and return to normal activity in the coming days,” Pence’s office says.
—@NBCNews
4/15/2021
crime
crime
Derek Chauvin Invokes Fifth Amendment, Won’t Testify
By Nia Prater and Margaret Hartmann
The defense has rested and closing arguments are set for Monday.
4/15/2021
the economy
the economy
The Biden Boom Has Begun
By Eric Levitz
Jobless claims are falling, factory production is rising, and retail sales are skyrocketing as Biden’s stimulus kicks in.
4/15/2021
politics
politics
Independents Aren’t Nonpartisan, They’re Just Disengaged
By Ed Kilgore
The increasing number of self-identified independents feeds partisan polarization by turning the parties over to ideologues and “outsiders.”
4/15/2021
crime
crime
Ex-Officer Who Fatally Shot Daunte Wright Charged With Manslaughter
By Nia Prater
Kim Potter was arrested and charged with second-degree manslaughter on Wednesday. She has been released on a $100,000 bond.
4/15/2021
covid-19
covid-19
What We Know About the Johnson & Johnson Pause and Vaccine Hesitancy
By Paola Rosa-Aquino
Europe faced a similar problem over a shot and clots.
4/15/2021
solarwinds
solarwinds
U.S. Sanctions Russia Over SolarWinds Hack
By Benjamin Hart
For the first time, the Biden administration named a specific suspect it deems responsible for the breach.