And the market conditions for Playboy are these: First, the prevalence of nude images and pornography of every stripe, on demand, for free, renders the ability to show a nipple — even a famous nipple — basically irrelevant. And second, building your brand on nudes is actually a liability when you want to reach an audience on Facebook and Instagram, platforms where the nipple is infamously not free.

So the new, shareable, millennial-friendly Playboy leads with Instagram starlet Sarah Rose McDaniel — you may know her as @krotchy — posing with her arm out, as if taking a selfie. Although she’s clothed, the image is in some ways more risqué than the uncensored Playboy of the past. It’s more intimate, which is by design — “the idea was to look at me from a boyfriend’s perspective,” McDaniel said — and every photo in the issue is unretouched. The overall message seems to be: The Playboy of the past was fake, like internet pornography is fake. This Playboy is real. Or at least as real as the meticulously curated lives your favorite models share on Instagram. 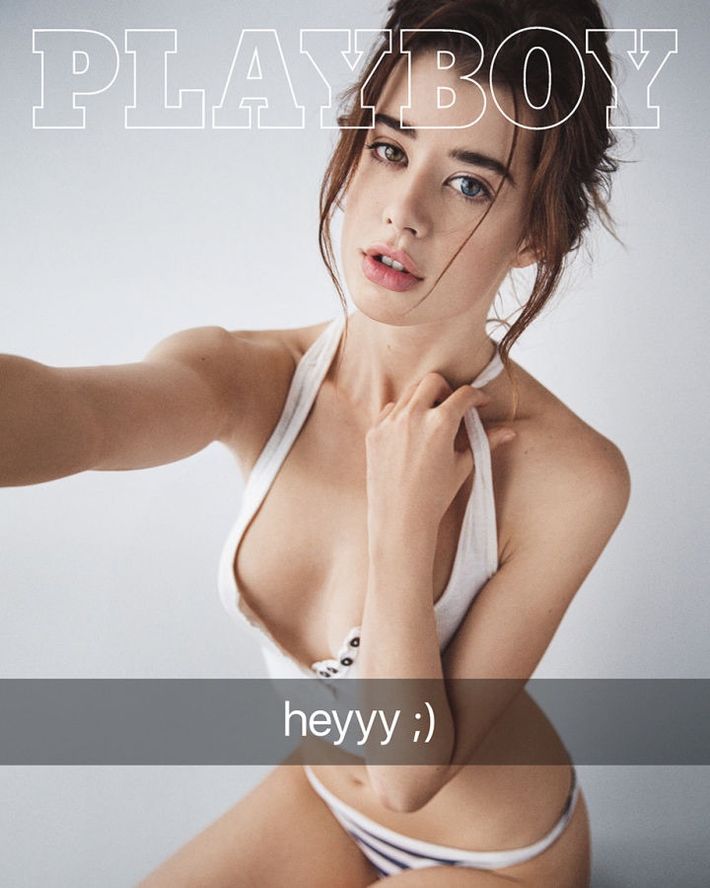 But this is a bit of a trick: The camera McDaniel is looking into isn’t the one she’s ostensibly holding. It’s operated by Theo Wenner. Two things Playboy can provide that Instagram can’t: high-level professional photographers and styling.

Even that is changing, though: Instagram celebrities with huge followings are increasingly able to land product endorsements and book shoots with top talent. Why would they want to pose for Playboy? There’s the audience, and the reach, yes, but as the Awl’s John Herrman pointed out recently, celebrities have little incentive to grant access to magazines who have fewer Twitter followers than they do.

Which leaves us with the one part of Playboy everyone jokes about: the articles. Thus far, journalists’ attempts to parse the phenomenon of popular women on Instagram have been a disaster. (See, e.g., the New York Post’s profile of 20-year-old insta-celeb Eileen Kelly, titled “I fuel fantasies of men who want sex with young girls, and I’m fine with it.” It’s a scorching-hot trashfire that made no attempt to understand Kelly or her audience.)

There’s a whole demographic with a lot to say and no mainstream publication to listen or take them seriously. If Playboy plays this right, it could be that publication. If they play it wrong, though, they’re just Steve Buscemi in 30 Rock. How do you do, fellow kids?

Best of luck to our legacy pornographic media!

THE FEED
8:00 a.m.
delta variant
delta variant
The U.K.’s Delta Surge Is Collapsing. Will Ours?
By David Wallace-Wells
Why the variant’s spread may be less pervasive than we currently expect.
7/31/2021
bugs
bugs
What Happens When All the Bugs Die?
By David Wallace-Wells
Bee ecologist Dave Goulson imagines a world without creeping things.
7/30/2021
capitol riot
capitol riot
‘The Internet’ Wanted an Insurrection, So Trump Gave It One
By Ed Kilgore
If you define “the American people” as your own noisy base, then the lies they spew online represent a mandate.

7/30/2021
infrastructure week
infrastructure week
5 Reasons Biden Got His Bipartisan Infrastructure Deal
By Eric Levitz
Mitch McConnell is poised to hand the president a big win. Here’s why.
7/30/2021
tokyo olympics
tokyo olympics
Athletes Aren’t the Ones Injecting Politics Into This Olympics
By Will Leitch
While most Americans are happy to marvel at the athletic achievements, a small minority of bad-faith blowhards are rooting against Team USA.
7/30/2021
politics
politics
Congress Considers Emergency Eviction Moratorium As CDC Authority Lapses
By Ed Kilgore
Biden dithered about his legal authority to keep evictions frozen, and now the deadline is here — though some states are acting on their own.
7/30/2021
sports!
sports!
The Best Things We’ve Seen at the Olympics So Far
By Claire Lampen and Mia Mercado
A swim coach horny for gold, teens shredding the skateboarding category, and more.
7/30/2021
covid-19
covid-19
CDC Internal Report: Delta As Contagious As Chickenpox
By Paola Rosa-Aquino
The report, based on unpublished data, says that while infections in vaccinated people are rare, they may be just as contagious as the unvaccinated.
7/30/2021

“Remote working for a short period of time, fine, but that’s not how the entrepreneurial economy works… Say to your workforce, ‘By Labor Day, everyone is back in the office.’”
—@dahvnyc
7/28/2021
politics
politics
Gavin Newsom Needs Democrats to Get Worried About the Recall
By Ed Kilgore
With the California governor’s prospects suddenly looking much iffier, he must find a way to turn out complacent Democrats.
7/28/2021
politics
politics
Republican Stands By 1/6 ‘Tourist Visit’ Comparison After Police Testify
By Nia Prater
“If you didn’t know the TV footage was a video from January 6, you would actually think it was a normal tourist visit.”
7/28/2021
politics
politics
Donald Trump’s Low-Energy Night in Texas
By Ben Jacobs
The leader of the Republican Party couldn’t elect his handpicked candidate in a congressional special election.