The Roy Gustav Cullen Building at the University of Houston Photo: RJN2/wikipedia

At public universities in Texas, the Second Amendment is in a standoff with the First.

On August 1, it will become illegal for any public college in the state to ban concealed firearms from its classrooms. To help professors prepare for this new state of affairs, the University of Houston Faculty Senate put together a PowerPoint presentation featuring background on the law and tips for adapting to the “new normal” it will create.

If a faculty member feels concerned about the danger armed students pose, the presentation recommends they do the following: 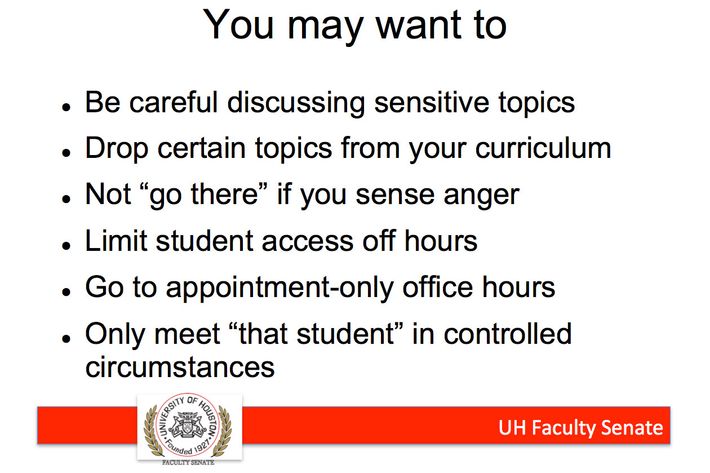 Freelance journalist David Perry, who first reported on the PowerPoint presentation, predicts, “the idea that your students have guns will have a vastly more chilling effect on academic freedom than people asking for trigger warnings, less offensive language, or to be thoughtful about microaggressions.”

Whether or not Perry’s fear comes to fruition, the anxiety spurred by Texas’s new law illustrates the way deference to the individual liberty of gun enthusiasts can impinge on the freedoms of the gun-shy. In fact, from a crooked angle, the concealed-carry law actually resembles an act of state coercion. Private colleges are still free to ban deadly weapons from their classrooms — a liberty that all of them have decided to exercise. But if teachers at a public university try to invoke that same right to a gun-free learning environment, big government will fine their school $10,000 a day. 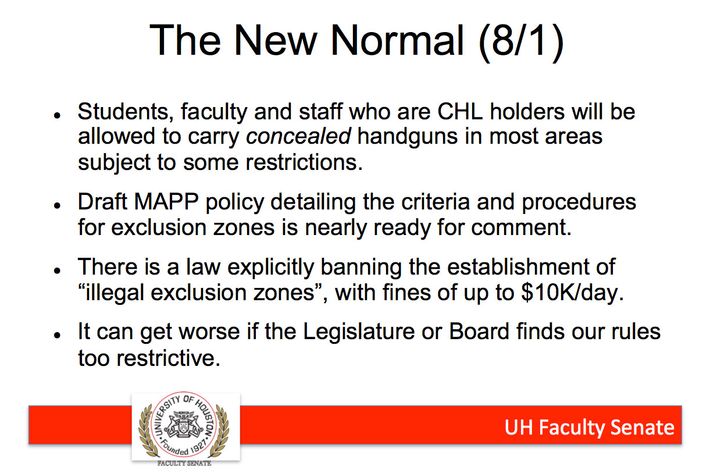