An English college student who wrote an article about life with webbed toes was surprised to discover, a year after the fact, that one of the top Google results for her name was a foot-fetish website. Someone at wikiFeet, a compendium of celebrity foot pics, had apparently put together an entry for Cachia, a non-celebrity, with every photo of her toes that she’d shared online. “Really fucking weird,” she wrote, understating the situation a little bit.

But Cachia wasn’t as offended that she’d been involuntarily thrust into the world of celebrity feet as she was that the user reviews of her toes were only “ok.”

“Quickly, my feelings of vulnerability turned to anger as I noticed my toes had only been rated 2.5 stars out of a possible five,” she wrote, captioning a photo of her mediocre rating, “are you fucking serious?”

”Just because I don’t have five clearly separate toes, it doesn’t give people the right to devalue them.”

Her life hasn’t changed dramatically since her feet “went viral” in the U.K. media about a week ago, although she has gotten around 70 Facebook friend requests (many from “creepy middle-aged men”) and her housemates now tease her because “MEN WANK OVER ALICES WEBBED TOES.” 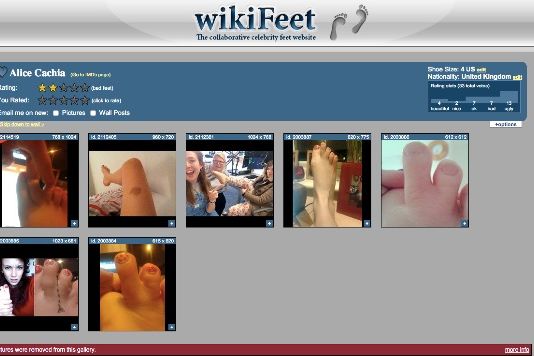 There’s also the small matter of a new photo that appeared on her wikiFeet entry since she became semi-famous.

“Now I’m getting freaked out because someone has uploaded a picture of my leg with a large bruise on it,” she wrote. “It’s definitely my leg because it’s my bed, but I have no idea when I took that picture, nor who I sent it to, and I don’t like the fact that someone decided to upload it to the website.”

Well, that certainly took a quick turn from harmless fun and a BBC1 appearance and headed directly for creeptown.

And Alice is certainly not alone. The internet’s celebrity foot-fetish community is large, and it is dedicated. It’s a well-known and somewhat strange fact that the top Google auto-complete for nearly every female celebrity’s name is “feet.”

Independent
Student Finds Photos of Her Feet on Fetish Site