Hackathons: the event of choice for idealistic Silicon Valley types who think all the world’s ills can be solved through code. Turns out, a bunch of well-intentioned volunteers can’t necessarily fix intractable social problems with an app built in a weekend. Weird! But that doesn’t mean hackathons are all bad. At the annual Stupid Shit No One Needs and Terrible Ideas Hackathon over the weekend, someone built a giant dick that spurts the gross, white “meal substitute” Soylent.

The hackathon was launched two years back by Sam Lavigne and Amelia Winger-Bearskin, and, as its name would indicate, it’s dedicated to building projects “that have no value whatsoever.” But the Stupid Hackathon is not actually stupid. It is very good. And its projects do have tremendous value. Tremendous comedy value.

Case in point: the aforementioned Soylent Dick, created by Nicole He, Katherine Pan, and Chino Kim. It’s a phallus made of wire mesh and Soylent-based Play-Doh that will ejaculate Soylent into your mouth or a cup if you feed it by typing in some lines about how wonderful Soylent is. This … is brilliant. It’s a parody of everything awful about tech culture, condensed into a penis and an Arduino.

See also: a “non-ad blocker” Chrome extension that blocks all internet content except ads. Or a Dark Net wedding registry that you can only get to using the anonymized Tor browser — because Pottery Barn was blocking Tor users. Or this delightful browser extension that puts the same picture of celebrity chef Guy Fieri on every page you visit: 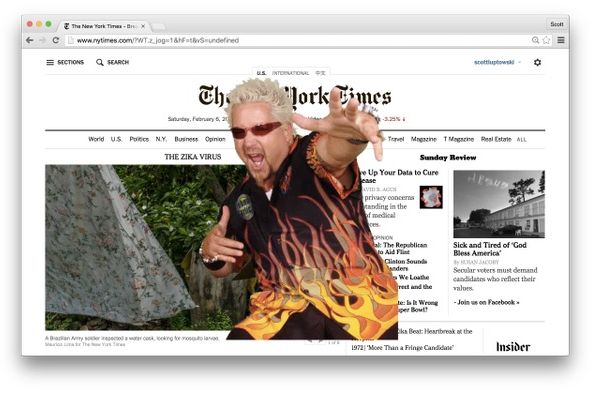 Are these “terrible ideas?” Does “no one need” an extension that replaces all the voices in Netflix shows with the computerized voice of a British nanny? Or a 3-D printer that only prints in spray cheese? Or a cake made out of Tums? (That last one was entered in the “Disrupting Solid Foods” category).

Well, probably. But we can still be glad that, after Saturday, these are all things that now exist in the world. And maybe we don’t need to throw hackathons in the garbage after all.

THE FEED
7:08 p.m.
covid-19
covid-19
What We Know About the Johnson & Johnson Pause and Vaccine Hesitancy
By Paola Rosa-Aquino
Europe faced a similar problem over a shot and clots.
6:53 p.m.
sports & money
sports & money
One More Thing Bernie Madoff Helped Ruin: The Mets
By Joe DeLessio
Author Devin Gordon on Madoff’s effect on the Mets and their tortured fanbase.
6:18 p.m.
gavin newsom recall
gavin newsom recall
Struggling California Republicans Gamble on Newsom Recall
By Ed Kilgore
These are grim times for the GOP in the Golden State. So they are calculating that a long-shot recall drive may be their best best for a win.

5:48 p.m.
the money game
the money game
Crypto’s Big, Billionaire-Making Day on Wall Street
By Jen Wieczner
Coinbase’s Nasdaq debut made various Silicon Valley execs and VCs — along with investor Kevin Durant — very happy.
4:53 p.m.
crime
crime
Defense Medical Expert Says George Floyd Died of ‘Cardiac Arrhythmia’
By Nia Prater and Margaret Hartmann
David Fowler, the former Maryland chief medical examiner, said that drug use and other health issues – not Derek Chauvin’s restraint – killed Floyd.
4:27 p.m.
the city politic
the city politic
The Voters Propelling Andrew Yang’s Lead
By Sean Piccoli
As he maddens his rivals, the mayoral frontrunner is riding on outsider appeal.
4:23 p.m.
politics
politics
Biden’s Steady Popularity Depends on Near-Universal Democratic Support
By Ed Kilgore
Biden seems to have figured out how to keep his party happy without mobilizing the opposition. But avoiding midterm losses will still be tricky.
4:18 p.m.
covid-19
covid-19
How Far Along Is New York City in Its Reopening This Spring?
By Matt Stieb
As of April 19, bars and restaurants can stay open until midnight.
3:59 p.m.
business
business
Bernie Madoff Told the Truth About One Thing
By Steve Fishman
He exposed the financial system as only a crook could.
3:36 p.m.
covid vaccines
covid vaccines
How Experts Are Reacting to the Johnson & Johnson Vaccine Pause
By Chas Danner
Most stressed that federal regulators were right to be cautious despite the long odds of serious side effects.
3:35 p.m.
infrastructure
infrastructure
Moderate Republicans Accuse Biden of Trying to Pass His Agenda
By Eric Levitz
Republicans suspect that Biden will forgo bipartisanship and pass a partisan infrastructure bill. Here are five reasons why they’re probably right.
2:59 p.m.

Obama, too, has had enough of America’s involvement in Afghanistan

President Obama, who disagreed with Biden on Afghanistan during their term, says: “After nearly two decades of putting our troops in harm’s way, it is time to recognize that we have accomplished all that we can militarily, and that it’s time to bring our remaining troops home.”
—@jeffzeleny
2:17 p.m.
crime
crime
Ex-Officer Kim Potter to Be Charged With Manslaughter in Daunte Wright’s Death
By Nia Prater
Kim Potter, who resigned yesterday, has been taken into custody and will be charged with second-degree manslaughter, officials said.
1:19 p.m.
black lives matter
black lives matter
From George Floyd to Daunte Wright
By Tarkor Zehn
The Derek Chauvin trial had Minneapolis’s Black community on edge. Then, police killed again.
12:20 p.m.

Officer who shot Daunte Wright will be charged

4/13/2021
Police Chief and Cop Resign After Daunte Wright Killing
By Benjamin Hart and Nia Prater
10:32 a.m.
the national interest
the national interest
Republican Senators Make Goonish Threat Against Major League Baseball
By Jonathan Chait
Speak up for voting rights, and the antitrust exemption gets it.
9:30 a.m.

AP source: Ponzi schemer Bernie Madoff has died in a federal prison, believed to be from natural causes
—@JesseRodriguez
7:59 a.m.

President Joe Biden’s address to a joint session of Congress will be April 28. We reported several weeks ago that the White House was looking at scheduling Biden’s speech to Congress around his 100th day in office. April 28 is Biden’s 99th day as president.

… The crowd for this Biden speech is expected to be far smaller than it usually would be for a joint session. Multiple senior aides tell us that only several hundred people would be allowed in the House chamber, and there will be strict spacing requirements on the floor.

According to a Capitol official involved in the planning, “there will be limits on the number of members and senators allowed to attend,” and lawmakers will be seated both on the floor and galleries above. Like other presidential addresses, this Biden speech will be designated a “National Security Special Event.” This formally puts the U.S. Secret Service in charge of “developing, exercising, and implementing security operations” for the event.

Details on Biden's joint address
—Punchbowl
7:00 a.m.
election coup
election coup
Will Republicans Try Another Election Coup in 2024?
By Ed Kilgore
Jonathan Last argues that 2020 could have been a dress rehearsal, and that a 2022 purge by Trump could make it work next time.
12:24 a.m.
nyc mayoral race
nyc mayoral race
Jay-Z Endorses McGuire, Working Families Party Endorses Stringer for NYC Mayor
By Matt Stieb
A big night for co-signs from Empire State institutions.
4/13/2021
florida
florida
Matt Gaetz’s Wingman Is Cooperating With the Feds: Report
By Matt Stieb
Joel Greenberg reportedly told DOJ investigators that he and the Florida congressman gave women cash and gifts in exchange for sex.
4/13/2021
capitol riot
capitol riot
Capitol Police Were Told to Hold Back Against Insurrectionists: Report
By Matt Stieb
An inspector general found that leaders didn’t heed their own intelligence and officers were told not to use their most serious crowd-control tactics.
4/13/2021
covid-19
covid-19
A Former FDA Chief on What It’s Like to Pause a Vaccine
By James D. Walsh
Dr. Margaret Hamburg, the former head of the FDA, on the controversial decision to stop giving out the Johnson & Johnson shot.
4/13/2021
daunte wright
daunte wright
Police Chief and Cop Resign After Daunte Wright Killing
By Benjamin Hart and Nia Prater
The local prosecutor leading the investigation expects to announce a charging decision as early as Wednesday.
4/13/2021
forever war
forever war
Biden: All U.S. Troops Will Leave Afghanistan by September 11
By Eric Levitz
The White House vows to end the longest war in U.S. history this year, no matter how conditions on the ground evolve.
4/13/2021
coronavirus vaccine
coronavirus vaccine
How to Sign Up for a COVID Vaccine in New York
By Matt Stieb
All New Yorkers over the age of 16 are now eligible to sign up for a shot.
4/13/2021
minneapolis
minneapolis
This Will Keep Happening
By Zak Cheney-Rice
Daunte Wright’s death and Derek Chauvin’s trial highlight an intractable problem with policing.
4/13/2021
pivot
pivot
Why Molecules Are the New Microchips
By Intelligencer Staff
Walter Isaacson on the tremendous upsides (and potential tremendous downsides) of the gene-editing revolution.
4/13/2021
vaccination
vaccination
What to Know About the Johnson & Johnson Vaccine Pause
By Benjamin Hart and Paola Rosa-Aquino
The FDA and CDC recommended a temporary pause in use of the vaccine while they probe several cases of recipients experiencing severe blood clots.