The best new meme of this week features side-by-side photos of Drake — one where he’s dressed in a slick jacket and tie, the other in warm-ups and a Michael Jordan ball cap. “Get you a man who can do both,” reads the caption. It says a lot about the perceived dichotomy between “class” and “swag,” especially for black men, and how Drake carefully navigates it. But it also inspired a number of parodies that are really, really funny.

Get you a man who can do both pic.twitter.com/D5vVY3u7qT

The idea that “class” and “swag” are polar opposites, and especially that the former is more desirable than the latter, has been part of meme culture for some time.

“Swag is for boys, class is for men,” goes one popular image. 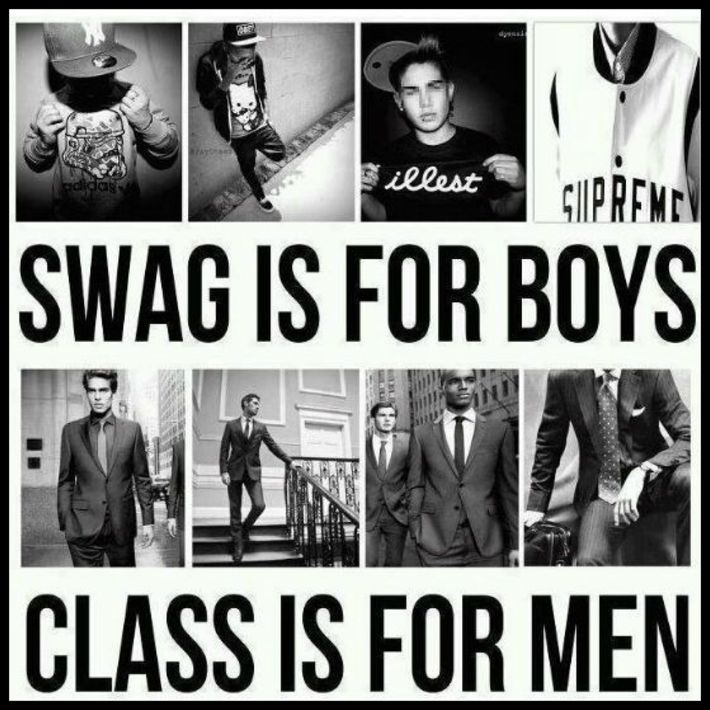 According to internet stereotypes, class and swag cannot exist in one person at the same time — and that’s what makes Drake, and the “man who can do both” meme, so fascinating.

Drake’s popularity is very much built on being all things to all people — he’s black and Jewish; he reps Toronto, but also Houston and Atlanta; he raps, but also sings; he makes music for his dudes, but also for his ladies. Drake acts hard or soft, depending on the situation and the target audience. It’s an infuriating double standard, but Drake somehow lives it: He’s the poster boy for “do both.”

So that infamous tweet from @_mikeshotya — now retweeted tens of thousands of times — appealed to the large and vocal Drake-stan segment of Twitter, but it also appealed to people who wanted to mock the inherent hypocrisy of a class-swag binary.

No one is demanding that Jeb Bush do both, and the idea that he — the consummate Establishment white guy — would even try is inherently absurd.

Steve Harvey is extremely wack, and has made a second career out of telling other people — especially women — how to act. Physician, heal thyself.

President Barack Obama can kinda-sorta “do both.” Like Drake, his response to the impossible demands of simultaneous class and swag is to be an unapologetic, and therefore cool, dork. It seems to have worked out for him, electorally speaking!

It’s funny because Bill Nye the Science Guy, a famous white person, is not expected to be swaggy.

It’s funny because Guy Fieri, a famous white person, is not expected to be either classy or swaggy. He’s merely expected to be a rich natural source of frosted tips, irrational excitement, and fryer grease.

James Corden, a British person, is automatically considered classy by American audiences due to his accent. He is not expected to have swag, and, in fact, may be disallowed from possessing it by the U.S. Constitution.

This is an excellent meme that reveals a lot about what we ask of our celebrities and, by extension, ourselves. At the same time, it’s also truly hilarious. Get you a meme that can do both.

Very Good New Meme: ‘A Man Who Can Do Both’

THE FEED
18 mins ago
early and often
early and often
Democrats’ Huge Primary Shake-up Won’t Change the 2024 Race
By Ed Kilgore
Displacing Iowa and New Hampshire will generate a lot of drama. But it won’t matter if Biden is the nominee, and the new schedule may not stick.
4:03 p.m.
tremendous content
tremendous content
Melania Trump Was Mastermind Behind ‘Hero Dog’ Story
By Margaret Hartmann
Should Melania have been in the Situation Room for the al-Baghdadi raid? No. But her dog idea was no dumber than anything her husband did.
2:45 p.m.
bird talk
bird talk
Meet Brooklyn’s Newest Power Couple
By Matt Stieb
Recent bald-eagle sightings are delighting human visitors and terrorizing bird residents in Prospect Park.