For all of the dismissive griping about social-media activism from its detractors, it can work incredibly well at directing debate and driving conversation. That’s the message of a new study from the Center for Media and Social Impact, which analyzed millions of tweets around Black Lives Matter and confirmed that social media was essential in turning local stories like Michael Brown’s death into a national discussion about race, criminal justice, and police brutality.

The study, by Deen Freelon, Charlton D. McIlwain, and Meredith D. Clark, is fascinating and well worth reading in full — not just for its confirmation of social media’s power, but for its analysis of its workings and limitations. To come to their conclusions, the authors analyzed 40.8 million tweets and more than 100,000 web links to determine what constitutes the greater Black Lives Matter initiative (which includes both Black Lives Matter as an organized protest movement, and the less codified discussion about racism, police brutality, and criminal justice happening under the umbrella of the hashtag #blacklivesmatter).

The researchers identified six major groups that engage in BLM discussion on Twitter, most of which are supportive of the movement’s goals in abolishing police violence against minorities: Black Lives Matter, amorphous hacktivist group Anonymous, black celebrities, black Twitter, mainstream news organizations, and conservatives. (See if you can guess which groups are not supportive.)

Analysis of the 40 million tweets, from 4.4 million unique users, reveals a few things about how online activism has operated for the last few years. For one thing, many of those participating in the dialogue do so by boosting the voices of others. From the report: “A large majority of the tweets in our dataset (75.3%) are retweets. In contrast, only a small minority of tweets (7.6%) contain @-mentions outside of a retweet context.” All six of the aforementioned communities contain de facto leaders referred to as “hubs.”

Without exception, the vast majority of users in every community are referenced (i.e., retweeted and mentioned) very little or not at all, while a small number of hubs account for a disproportionately large share of references. Hubs within a given community are usually similar to one another in terms of political views, occupation, age, race, geographical location, and/or other characteristics.

One can infer that though neither the BLM movement or its opposition have explicit leadership, there are those who wield a larger amount of power over the discourse. On the BLM side, it’s organizers like DeRay Mckesson, Johnetta Elzie, and Shaun King. In the conservative section, it’s commentators like Sean Hannity and outlets like Fox News and the Blaze.

If you spend all day on social media, it’s not difficult to find yourself in a filter bubble — one in which it seems as though the issues brought to bear by Black Lives Matter are continually being discussed. One particularly fascinating part of the report looks at activity over time across a much wider swath of Twitter — demonstrating that truly broad discussion correlates with major news events, and if you’re outside of a particular bubble you’re much less likely to be aware of the discussions happening inside. 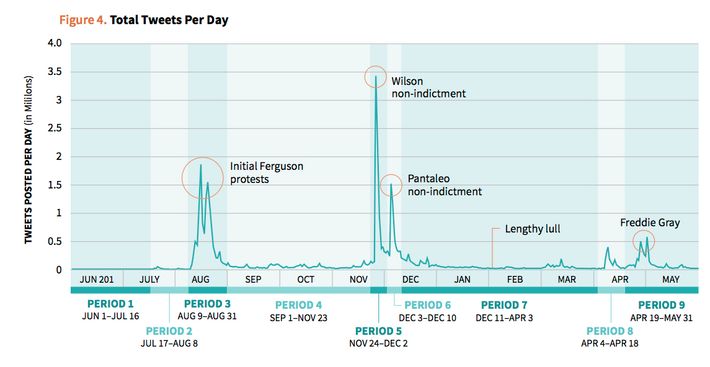 While #blacklivesmatter first gained momentum in August 2014 when Mike Brown was shot and killed in Ferguson, Missouri, the hashtag and associated keywords often enter long lulls in between incidents. In fact, Officer Darren Wilson’s non-indictment generated more discussion than the initial shooting did in August. The Wilson decision in November 2014 generated nearly twice the amount of activity than any other major incident. Though activists have continually kept the issues in the news, major incidents — shootings as well as indictment decisions — generate levels of discussion magnitudes greater than what occurs on an average day.

The sentiment of those tweets was also largely supportive of the movement. Though the researcher refrained from offering specific statistics (sentiment analysis is a dicey area, especially on Twitter), they did find that “the vast majority of highly-retweeted messages supported the movement in some respect.”

One clear takeaway from the analysis is that throughout the period from mid-2014 to mid-2015, black voices were continually leading the conversation, outside of the vectors of traditional media.

Throughout the year, the Twitter discussion remained Black-led. During no period do non-Black voices constitute an overwhelming majority of the most-referenced users, although the proportion of non-Blacks does seem to rise somewhat during the periods that include the highest peaks.36 Although it makes sense that the people who care most about the impact of police violence on Blacks would be Black, it is significant that many of the most widely-heard voices are also Black, and that this holds true even during times of heightened attention. Activist communities in general and BLM communities in particular were major sources of information, as the network diagrams indicate.

Finally, the report points to Black Lives Matter being a more powerful social-media campaign because of its focus and its ability to make use of media like photographs and videos to spread its message. Movements like Occupy Wall Street and its vague “99 percent” were quickly obfuscated and coopted by other groups, but — as the researchers state — “Unlike wealth or income inequality, police brutality is concrete, discrete in its manifestations, and above all, visual.”