Chipotle stores were closed Monday so that staff could meet and discuss the health concerns surrounding the burrito chain. As a thank-you to customers who were missing out on their free-range burrito bowls, Chipotle offered a coupon for a free entrée to anyone who texted 888–222. What the company didn’t realize is that it was setting up … the heist of the century.

The setup: Find people who had tweeted their coupon and included the bar code required for redemption. The plan: Use that bar code to nab a free burrito. The mark: Enzo.

Above you see Eli, the master thief, bragging about his score. “I do not have any remorse for nabbing these burritos,” Eli told me over Twitter DM, “due to the fact that it is their fault for tweeting their coupon out.” He questioned the worthiness of anyone who would share their coupon: “How could you [be] that oblivious to the fact that you just tweeted a free Chipotle coupon out?”

Enzo, the victim, confirmed that his burrito had been nabbed by Eli. When asked how he was feeling, Enzo said, “I’m feeling hungry.” He added, “I’m not mad, hopefully he will use the money he saved by stealing my burrito to buy a nicer hat.” (Oh, snap.)

And what of the burrito itself? “I get chicken, brown rice, hot salsa (which is a key), corn cheese and lettuce,” Eli revealed.

As of this afternoon, Eli had already procured a second burrito via Twitter. 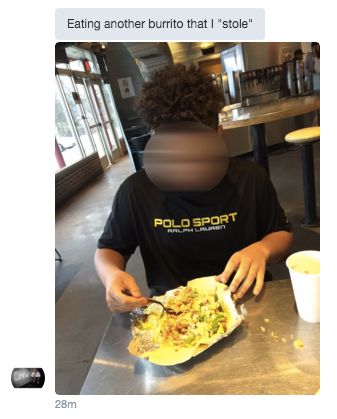