More than you might expect, holding a Q&A session on Reddit has become one of a celebrity’s biggest liabilities. The upsides are obvious: If you’re a celebrity free of major controversy, you can appear down-to-earth, speaking directly with fans and promoting your latest project. But if at any point you’ve been hit with allegations of impropriety, steer clear of Reddit. As the saying goes, “The internet never forgets.”

The latest victim of AMA-cide is Wyclef Jean, who took to Reddit to answer questions about the Fugees’ landmark album The Score for its 20th anniversary. Instead, he was beset by years-old allegations that his charity, the Yele Haiti Foundation, established in the wake of a disastrous earthquake, misused funds to pay for things like recording-studio rent and mistresses.

The most-upvoted question (4,646 points) as of right now begins, “Hi Wyclef, I have a question for you, how do you sleep at night knowing that the money people were donating to your charity Yele could have been spent improving the lives of ‘your people’ but instead you spent it on yourself and your celebrity friends?”

Following the barrage of questions, Jean quickly deleted his account, which also caused all of his responses to vanish as well.

An archived version of the page does include a few of his now-vanished responses, in which he claims that readers did not have all of the facts. 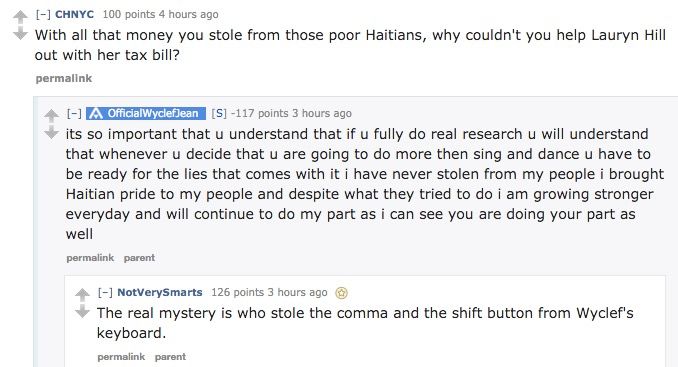 Even for questions not regarding the allegations, Wyclef was unable to catch a break.

Wyclef is just the latest in a long line of AMAs gone wrong. There’s even a subreddit devoted to the topic. AMA stands for “Ask Me Anything” and redditors take that “anything seriously. Woody Harrelson’s AMA went awry after a user claimed that Harrelson once crashed a prom party and took a teenager’s virginity. Harrelson tried to keep discussion focused on the movie he was promoting and took a lot of crap for doing so. In the non-celeb arena, the CEO of REI once caught flak when an employee criticized the company’s management.

In general, asking web users to comment on a celebrity in an unfiltered environment is a terrible PR move. In November of 2014, Bill Cosby invited users to “Meme me!” with the hashtag #CosbyMeme. You can guess what happened next.