Bernie Sanders has the momentum. He has the enthusiasm. He has the message the Democratic Party needs to inspire “yuge vota turnout” in November — this is the case the insurgent socialist has been outlining for Democratic voters and superdelegates over the past week, as landslide victories in a series of Western caucuses have thrust him back into contention.

For a brief moment, the scene outside the Apollo Theater on Wednesday morning appeared to bolster the senator’s case. Hillary Clinton supporters crowded the sidewalk along 125th Street, waiting to hear the Democratic front-runner kick off New York’s primary race. A Clinton staffer ran along the outside of the line demanding a “Hill-a-ry, Hill-a-ry!” chant, which the crowd chose not to provide; over their silence, you could hear a small contingent of Sanders supporters shouting something about “Bernie” and “the middle class” from across the street. But it quickly became clear that the Clintonistas’ quiet wasn’t a product of apathy but of collective enthusiasm: Clinton’s supporters were too busy craning their necks toward the front of a line that stretched for blocks, too anxious that they might miss this chance to see their champion, to cheer.

Inside the Apollo there was no lack of adulatory chanting. Cries of “madame president” and “I’m with her” rained down on Clinton as she delivered the opening salvo of her (adopted) home state’s primary campaign. The stakes in New York’s Democratic contest are far higher than they appeared when Clinton first launched her bid for the presidency. Sanders’s domination among younger voters and mastery of online fund-raising has kept his underdog campaign alive well past its expected expiration date. The Vermont senator’s path to the nomination is narrow and full of obstacles that appear insurmountable – his enormous deficit among African-American voters and superdelegates, to name just two. But national polls show the Democratic race to be as close as it has ever been, and as long as Sanders remains in mathematical contention, he’ll keep mounting a loud and biting critique of Clinton from here to California.

New York offers Clinton a chance to effectively end Sanders’s hopes in April. Polls show her up in the Empire State by over 30 points. If she achieves that kind of landslide on April 19, no amount of mathematical noodling will spare Sanders’s supporters from the certainty of defeat. But if she fails to earn a decisive victory in the state she served as senator for eight years, Sanders’s argument about enthusiasm and momentum will have a lot more merit than it does today.

“I don’t have to tell you this is a wild election year,” Clinton cautioned her admirers in Harlem. “I’m not taking anything or anyone for granted.”

She then outlined her case against Sanders, or as she insisted on calling him throughout her speech, “my opponent.”

“When any candidate comes before you, that candidate owes it to you to be clear about how we’re actually going to deliver,” Clinton said, before noting that she and her opponent share many of the same goals. “But some of his ideas for how to get there won’t pass; others just won’t work because the numbers don’t add up. And that means people aren’t gonna get the help that they need and deserve, and that’s what this is supposed to be about.”

For Clinton, it’s about “making a difference, not making a point.” Sanders can tout the purity of his (non-gun-related) voting record all he wants, Clinton suggested, but purity is actually a breed of privilege.

This orientation toward results is the heart of Clinton’s pitch. It functions simultaneously as an attack on Sanders’s (alleged) lack of legislative accomplishments, a preemptive defense of her heresies against the left, and a canvas to decorate with the more pleasing parts of her record. At the Apollo, Clinton touted her support for 9/11 first responders, her work on the children’s health-insurance program, and her staunch advocacy for the Brady Bill’s gun reforms. 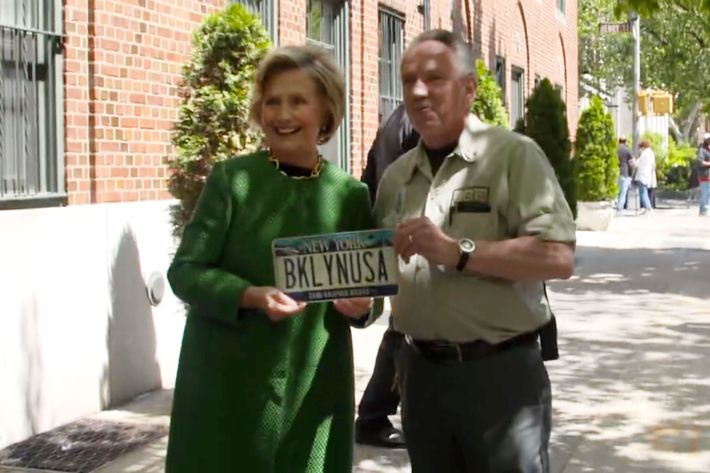 She supplemented this plank of her argument with several references to Sanders’s ineloquence on foreign policy, reminding her audience, “On April 19th, you are voting for a president and a commander-in-chief.” Finally, she reiterated the charge that Sanders is a “single-issue candidate,” whose obsession with income inequality blinds him to other sources of systemic disadvantage. “I take a backseat to no one in taking on income inequality,” Clinton said. “But it’s also important to take on racial inequality and discrimination.”

This has always been one of Clinton’s most dubious lines of attack. Sanders had a platform addressing “racism and racial justice” months before the Clinton campaign drafted its own. His stump speech includes calls for criminal-justice reform, boosting African-American youth employment, guaranteeing maternity leave for working mothers, and closing the gender wage gap.

Still, Clinton’s critique of Sanders’s insufficient concern for racial disadvantage has been effective. She has retained her front-runner status on the strength of her widespread African-American support. And in her speech’s closing passages, Clinton illustrated one reason for that strength.

After highlighting the Republican candidates’ recent demagoguery against American Muslims, Clinton told the story of Mohammad Salman Hamdani, a 23-year-old paramedic who died trying to provide health care at Ground Zero on 9/11.

“For months, he was considered missing,” Clinton said. “Some wondered if this young man with a Muslim name and background in science could have anything to do with the attacks. The tabloids piled on … Then, after his body was found, everyone realized how wrong they had gotten it. He wasn’t a suspect, he wasn’t a terrorist, he was a hero.”

“Mohammad was an immigrant. He was a New Yorker. He was an American,” Clinton added. “And he died trying to help others live. It’s up to us to make sure that his and so many others’ sacrifice counts for something, and we do that by standing up to bigotry in all its forms.”

Here, Clinton didn’t frame the right-wing’s Islamophobia as a practical problem, a “counter-productive” way of speaking that spurs jihadist recruitment. Rather, she framed it as a denial of our common humanity, one that blinds us to the goodness in each other and in our country – the very things a national-security policy should seek to defend.

Clinton doesn’t have a better platform for combating bigotry than her opponent. But she has a rhetorical dexterity that Sanders has often lacked. Her elucidation of bigotry’s evils spurred some tears and much cheering at the Apollo. Sanders has three weeks to gin up an enthusiasm gap in the Empire State. He’s going to need all the time he can get.