Finally, the day has arrived. Miitomo is here! Miitomo, the hot new app! There are lots of popular apps, and today that app is Miitomo.

Miitomo is Nintendo’s first app.
Miitomo, pronounced “mee-toh-moh,” is available on iOS and Android in the United States as of today. It’s been out in Japan for a couple of weeks.

Sales for Nintendo’s hardware, the Wii U and the Nintendo 3DS, have been lagging, and the company is looking at other ways to make money. Specifically, it’s translating some of its most well-known properties to mobile phones. Later this year, it’s releasing a Pokemon game. For now, though, it’s just dipping its toes in the water with Miitomo.

Miitomo is like a goofier version of the Sims.
I hesitate to call Miitomo a game. It’s a program in which you create a virtual avatar of yourself. Nintendo refers to them as Miis. They’ve been around for a decade, ever since the original Wii was released. They’re cute! People have been messing around with Miis for years, styling them to look like celebrities or using other games to have them say heinous things.

In Miitomo, you use your Mii to walk around a single room and visit your friends, also presented in Mii form. You answer small-talk conversation-starter questions about yourself. You earn coins that can then be used to buy new, goofy outfits, and accessories. That’s it; it’s pretty simple.

Adding friends is needlessly complicated.
Yeeeeaaaahhh … that’s the thing. Nintendo is notoriously terrible at designing online systems. There isn’t even a username system by which you can add friends. There are three ways: via Facebook, via Twitter (you have to be following each other), and via being in physical proximity to another user. It’s kind of garbage, because you have to already be linked in some other way.

There is a QR-code system by which you can share your Mii’s appearance, but that just adds a look-alike to your collection. It doesn’t actually add a friend.

What’s the social aspect?
Miitomo asks you a lot of questions. It’s basically like posting prepackaged status updates. Here’s my favorite food, here’s what I did over the weekend, here are my wildest dreams, and so on and so forth.

The other great part of Miitomo is the photo tool. You can pose you Mii in a bunch of goofy poses against a bunch of cutesy backgrounds (or import custom ones from the photos on your phone) and share them on Miitomo and other social networks. It’s kind of like Bitstrips, only a lot less schmaltzy.

Has my Miitomo experienced peaked already? I got the pancake suit #Miitomo #MiitomoStyle https://t.co/wewGpiHEvC pic.twitter.com/QpL7jEqSh2

It feels like a backdoor entry into data mining.
Though it’s not presented in the standard feed format, Miitomo feels like a proto-social network, and its Q&A format has the shape of a data-collection operation if you take a few steps back and squint real hard. But Nintendo has been so inept for so long when it comes to online functionality that I wouldn’t be alarmed. I don’t think they can data-mine their way out of a wet paper bag.

There’s basically nothing you can’t say on Miitomo.
The most glaring omission from the app is any sort of text filtering, meaning that users can type anything they want. For instance, one of the very first questions that the app asked me was about the current events I was interested in.

When your friends visit, you can offer custom greetings and salutations. Here are mine. 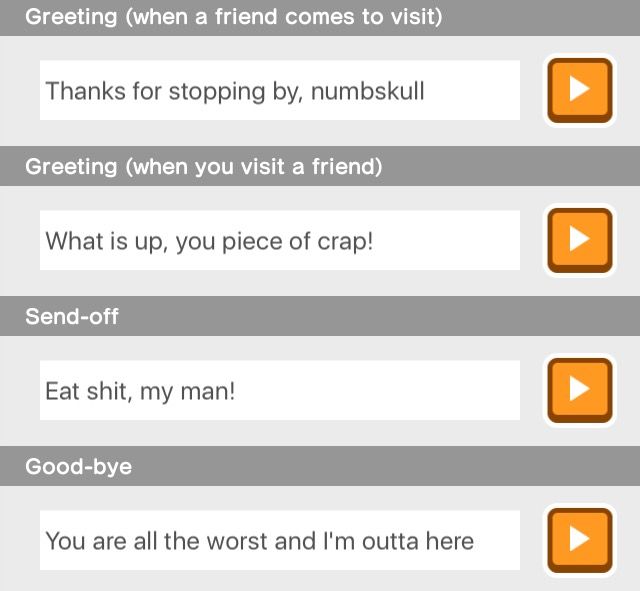 On top of all of this, Mii text is converted into robotic speech, which means that when I told Miitomo that fascism was becoming popular, this is what got read in a Stephen Hawking–esque timbre. 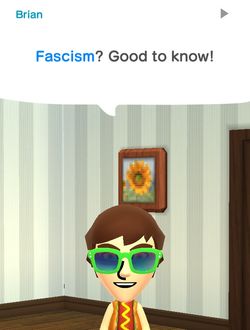 Nintendo’s lack of filtering is somewhat surprising given how reluctant it’s always been to build any sort of open online service. It’s usually almost militant in making its products safe for young children. The greater latitude on Miitomo, if I had to guess, is probably due to how difficult it is to add people as friends in the first place.

The app is free, but there are microtransactions.
Yeah. You earn coins with which to buy new clothes slowly, but you can pay real money to get a bunch of coins. It’s all cosmetic and pretty harmless, but I bet it’ll make Nintendo a ton of money.

It seems harmless.
If you’re on the fence about Miitomo, then, yeah, why not give it a spin? It’s free, and wacky, and probably good for a laugh or two. I’m enjoying dressing my virtual self up in a hot-dog costume to talk about ISIS.

Everything You Need to Know About Miitomo