Here’s a nice reminder that not every new Twitter feature demands an enormous, multi-day freakout. Today, the social network announced a new feature in its mobile app aimed at a community that often goes ignored by tech companies: people with disabilities. For the benefit of visually impaired users, Twitter now offers the ability to add alt text to images uploaded to the service.

You’ll be familiar with alt text if you’ve ever hovered over an image on a major publication’s website; it’s that small text box that pops up after a few seconds. While it might seem extraneous, alt text and similarly hard-to-reach metadata are essential for web users who are visually impaired. Screen readers, which parse HTML data for text and then convert it into audio (or Braille), allow those with poor or no eyesight navigate the web.

On social media, alt text basically does not exist. Blogging platforms and content-management systems might have fields in which users can insert alt text, but social platforms — even popular ones like Facebook — generally do not. This is a product of both user and developer laziness. Social-media users are often not aware of the purpose that alt text serves, and, even if they were, adding it complicates the publishing process. Users may be inclined to skip it (which is not great, but fine; individual users generally shouldn’t be held to the same accessibility standards as, say, a major news site would be). Developers, seeking to make publishing as easy as possible in order to encourage users to continue posting, often don’t even provide the option for alt text.

This is what makes Twitter’s announcement today all the more exciting — they’re introducing accessibility options in a simple manner. “The next time you add an image to a Tweet,” they write, “each thumbnail in the composer will have an ‘add description’ button. Tap it to add a description to the image. People who are visually impaired will have access to the description via their assistive technology.” Descriptions can be up to 420 characters (nice). The functionality is also available via Twitter’s API, meaning third-party apps can bake it into their apps as well.

Here it is in action on a photo of a dog that I tweeted. 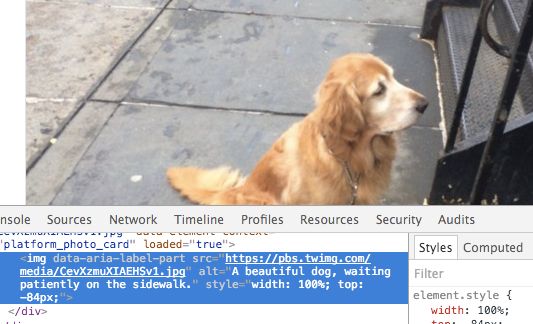 It doesn’t look like much, but it could make a world of difference for the visually impaired. Now, it’s up to Twitter’s users to actually take advantage of it.