Opponent of Obamacare who is probably not going to be swayed by data indicating the program has succeeded. Photo: Bill Clark/CQ Roll Call

During the Obama era, the keenest minds in the conservative movement have had to develop policy responses to the administration’s agenda. But those policies had to be crafted within bounds established by Republican politics — conservative ideas were useful only insofar as conservative politicians could plausibly advocate them. Republican politicians, in turn, had to operate within the bounds of what their voters considered acceptable. And Republican voters, as the 2016 election cycle has made abundantly clear to even those long committed to denying it, are bat-shit crazy.

That frothing quality burst forth in its fullest form during the debate over health-care reform, in the summer of 2009. Angry Republicans flooded town hall meetings to denounce a law that they saw as redistributing resources from people like themselves to people who were not, identifying sources of grievance both real (cuts to Medicare) and imagined (death panels). The Republican Party’s stance on health-care reform took shape during those days of rage, and even six years after the law’s passage, its position on Obamacare has remained unaltered. The law is a failure and must be repealed, and no evidence can convince conservatives otherwise. A half-dozen years after its passage, none have dared revise that stance.

One of Obamacare’s goals, beyond expanding access to health insurance and paying for its budgetary costs, was to “bend the curve” of health-care inflation, which has historically grown faster than the cost of other things. The law implemented a wide array of reforms designed to bring more cost-consciousness into the system. Indeed, health-care inflation has not only slowed, it has dropped to the lowest level since the government began measuring it: 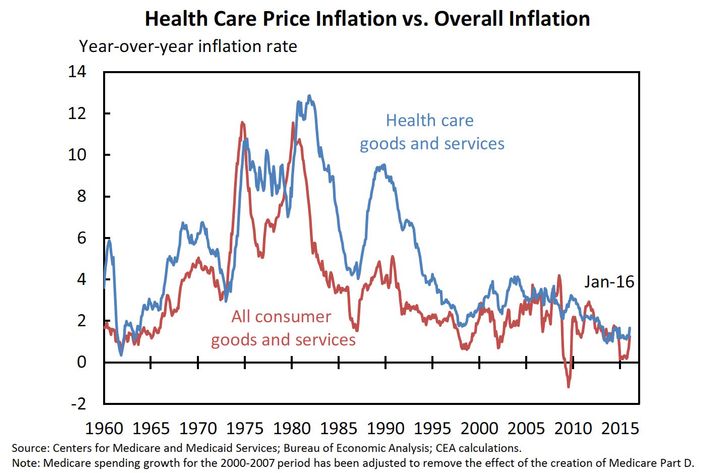 Some aspects of the lower health-care-inflation rate can be clearly tied to Obamacare reforms. For instance, the old Medicare system gave hospitals little incentive to keep their patients healthy once admitted. Just the opposite: A patient who acquired an illness in the hospital, or had to be readmitted, would receive more treatment, making more money for the hospital. Obamacare changed its reimbursements to penalize hospitals with high readmission rates. And sure enough, medical errors in hospitals are down, as are patient readmission rates: 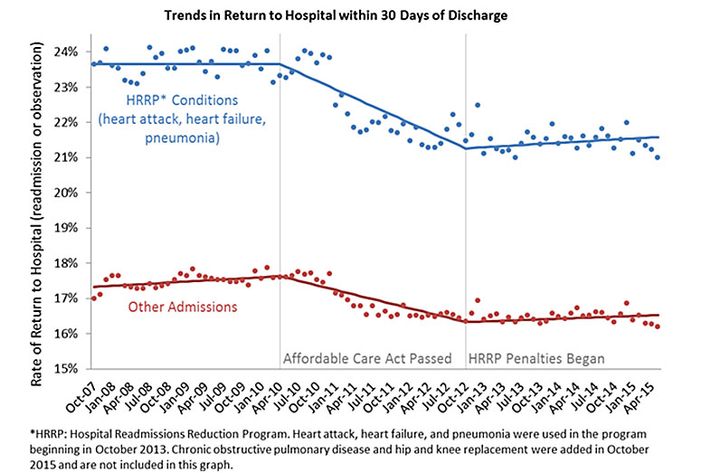 Other reforms have worked through the medical economy in ways that are harder to measure as precisely. It’s impossible to know just what proportion of credit the law deserves for the lower inflation rate, some of which might have occurred anyway. (Or it might not — it can’t be proven.)

Among conservatives, though, it remains an unchallengeable certainty that Obamacare has failed. What about the historically low medical inflation? Ramesh Ponnuru, a leading conservative intellectual, expresses his certainty that the entire trend would have happened without any of the law’s cost reforms. According to Ponnuru, health-care inflation was already falling before Obamacare’s enactment:

The administration argues that the law has contributed to a slowdown in the growth of health spending. But that slowdown started in 2002. Obamacare can’t be the cause. The best that can be said about the law’s effect on health spending is that its early years haven’t interrupted that slowdown. 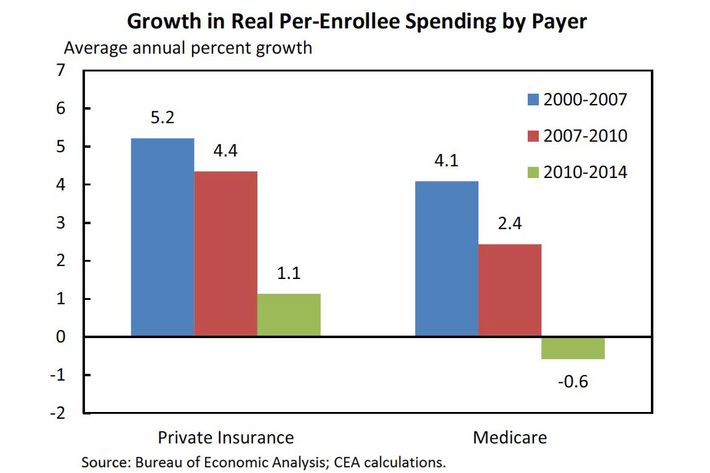 The trouble is that the cost explosion is in the first place largely a function of the way the government has used its power as a provider and regulator of health insurance. The open-ended structure of Medicare and of the employer-based-insurance tax exclusion, together with the way Medicaid costs are shared by states and the federal government, have created huge incentives to spend more on health care, and therefore pushed costs upward. Obamacare would double down on an approach to limiting Medicare costs that has failed for decades, would massively expand Medicaid without reforming it, and would largely keep in place the tax exclusion while adding a new entitlement on top of it. It would exacerbate the causes of the cost problem while moving us further away from a real market in health insurance.

This was a testable hypothesis. If health-care costs rose at a higher rate than they had before 2010, conservative critics of the law would have reason to claim vindication. Indeed, they seized on every preliminary scrap of data that seemed to indicate higher health-care costs. National Review (where Ponnuru works as a senior editor) editorialized, beginning in 2010, that Obamacare was already causing health-care inflation to rise:

Health-insurance rates already are rising even more quickly than they had been in the past because of concern about the costs that will be imposed by Obamacare … These consequences were unintended, but they were not unpredictable: They were, in fact, predicted by a very large number of critics, not least those writing for National Review.

Conservatives have gone from absolute ideological certainty that health-care inflation would rise in the wake of Obamacare to absolute ideological certainty that the drop in health-care inflation has nothing at all to do with Obamacare. It’s obvious that no conceivable data can falsify conservative opposition to Obamacare. The premise that Obamacare has failed is a matter of doctrinal writ, as holy as the sanctity of the great Ronald Reagan. To abandon this position is to abandon conservatism itself. Conservatives can try to redirect their base’s rage toward the construction of an alternative plan to replace Obamacare, but they cannot concede that the law has actually succeeded in advancing its stated goals. Republicans hate Obamacare not for its concrete outcomes but for what it represents to them. If Trump’s campaign has demonstrated anything, it is the hopelessness of crafting technocratic justifications for the pulsating right-wing Id.

THE FEED
1:44 p.m.
stop the presses
stop the presses
The New York Times Newsroom Gets Ready to Walk Out
By Shawn McCreesh
It’s a frosty winter for the media business.
12:31 p.m.
the national interest
the national interest
Kanye’s Willing Republican Partners
By Jonathan Chait
First they ignore the extremists. Then they quietly accept them.
9:57 a.m.
politics
politics
Not Even Alex Jones Can Help Kanye West
By Nia Prater
The Infowars host kept trying to let him denounce Nazis, but he doubled down on his admiration of Hitler.

9:00 a.m.
games
games
The U.S. Can Absolutely Beat the Netherlands on Saturday
By Will Leitch
Your guide to this weekend’s very big, very winnable game.
8:00 a.m.
the group portrait
the group portrait
Elon Musk’s Former Employees Pour One Out for Twitter
By James D. Walsh
In New York, they gathered at a favorite post-work bar. They commiserated, gossiped, swapped numbers, and promised to keep in touch.
8:00 a.m.
the law
the law
Why Hasn’t Sam Bankman-Fried Been Arrested Yet?
By Ankush Khardori
Bernie Madoff was arrested in a matter of days after his fraud came to light, but SBF is still a free man. What gives?
12/1/2022
mar-a-lago raid
mar-a-lago raid
Appeals Court Smacks Down Judge Who Ruled for Trump Over FBI
By Chas Danner
The 11th Circuit Court of Appeals excoriated U.S. District Judge Aileen M. Cannon’s interference in the Mar-a-Lago raid investigation.
12/1/2022
2022 midterms
2022 midterms
Why Did Democrats Get the Late Breaks in the Midterms?
By Ed Kilgore
A lot of the shock and awe over the midterm results was the product of an expectation of a late Republican surge that didn’t happen.
12/1/2022
2022 midterms
2022 midterms
Another Former Lover Accuses Herschel Walker of Misconduct
By Ed Kilgore
Many women have painted a portrait of Walker as an unstable and violence-prone man possibly suffering from untreated mental illness.
12/1/2022
early and often
early and often
Democrats Should Worry About Signs of Lower Black Turnout
By Ed Kilgore
Even in states where Black candidates headed up Democratic tickets, turnout was down. Democrats need to figure out why that happened.
12/1/2022
the money game
the money game
Why The Economy Is Starting To Feel Good All Of A Sudden
By Kevin T. Dugan
The Federal Reserve looks ready to ease up on throttling the economy. Have we averted disaster?
12/1/2022
sbf: the virtue was the con
sbf: the virtue was the con
What Does Sam Bankman-Fried Have to Say for Himself?
By Jen Wieczner
An interview with the disgraced CEO.
11/30/2022
early and often
early and often
The Many Ways MAGA Republicans Threaten Kevin McCarthy
By Ed Kilgore
The House Freedom Caucus and its MAGA allies want power over their party’s House caucus. But above all, they want scorched earth between the parties.
11/30/2022
royal family
royal family
It’s Another Chapter of Racism and the Royal Family
By Benjamin Hart
A royal aide allegedly asked a British guest at Buckingham Palace what part of Africa she was from.
11/30/2022
early and often
early and often
Trump Was Tricked Into Dining With Too Many Antisemites
By Margaret Hartmann
The poor guy didn’t know about Nick Fuentes, he just wanted to hang with Kanye West — who repeatedly attacked his Jewish son-in-law, Jared Kushner.
11/30/2022
all the live long day
all the live long day
Why America’s Railroads Refuse to Give Their Workers Paid Leave
By Eric Levitz
Wall Street’s new robber barons can’t make the trains run on time.
11/30/2022
early and often
early and often
Herschel Walker Can’t Shake His Texas Residency Problem
By Ed Kilgore
The GOP Senate candidate is being hit with renewed questions about his residency, which underscore claims that his heroic image in Georgia is hollow.
11/30/2022
politics
politics
Hakeem Jeffries Elected As Next Leader of House Democrats
By Nia Prater
The 52-year-old congressman will become the first Black person to lead a congressional party.
11/30/2022
the inside game
the inside game
One of Democrats’ Biggest Draws This Year? Dave Matthews.
By Gabriel Debenedetti
Jamming out the white suburban Gen-X vote.
11/30/2022
world cup
world cup
Pulisic Says He’ll Return From Very Painful-Sounding Injury
By Benjamin Hart
“Pelvic” and “contusion” are two words you never want to see together.
11/30/2022
screen time
screen time
Why Elon Musk Is Picking a Fight With Apple
By John Herrman
He speaks of a civilizational battle. But he probably sees a potential business advantage.
11/29/2022
politics
politics
What a Difference 10 Years Makes: The Senate Votes to Protect Same-Sex Marriage
By Nia Prater
The legislation received support from several Republican senators, including Mitt Romney, who once openly opposed same-sex marriage.
11/29/2022
games
games
The U.S. Pulled It Off
By Will Leitch
They survived a tense second half and an injury to their best player to beat Iran.
11/29/2022
early and often
early and often
Republicans: Leave the World’s Richest Man Alone!
By Margaret Hartmann
Ron DeSantis and Kevin McCarthy want everyone to “stop picking on Elon Musk.” They’ve barely said anything about Trump dining with antisemites.
11/29/2022
politics
politics
Eric Adams Says His Upcoming Trip to Qatar Is ‘On My Dime’
By Nia Prater
The mayor is set to travel to Doha, Qatar, in preparation for New York City to serve as a host city for the 2026 FIFA World Cup.