“I had gone off to Europe to write for the Saturday Evening Post,” Pete Hamill recalls, “and then came back almost a year later, and I saw New York in a way that was fresh rather than just a habit that I embraced each morning, and began to see and hear the complaints: Nobody gives a shit about you or me.” It was 1969, Mayor John Lindsay was saying lofty things about poverty and housing and race, and hard-hat New York was steamed. “The Democratic Party,” Hamill continues, “was moving away from service-oriented politics — you know, your-kid-needs-a-bail-bondsman stuff that was useful — into abstractions, and arguments about Vietnam and issue-oriented politics.” Hamill did his reporting among the Archie Bunker guys in tough neighborhoods (Park Slope was one back then!), and got quotes like this:

“Look around,” another guy told me, in a place called Mister Kelly’s on Eighth Avenue and 13th Street in Brooklyn. “Look in the papers. Look on TV. What the hell does Lindsay care about me? He don’t care whether my kid has shoes, whether my boy gets a new suit at Easter, whether I got any money in the bank. None of them politicians gives a good goddam. All they worry about is the niggers. And everything is for the niggers. The niggers get the schools. The niggers go to summer camp. The niggers get the new playgrounds. The niggers get nursery schools. And they get it all without workin’. I’m an ironworker, a connector; when I go to work in the mornin’, I don’t even know if I’m gonna make it back. My wife is scared to death, every mornin’, all day. Up on the iron, if the wind blows hard or the steel gets icy or I make a wrong step, bango, forget it, I’m dead. Who feeds my wife and kid if I’m dead? Lindsay? The poverty program? You know the answer: nobody.”

Hamill was able to talk to them because he had grown up in their world: “It could be the guy standing next to you at the bar — I was still drinking then. Or it could be a friend that I hadn’t seen for a while. I had worked in the Brooklyn Navy Yard as an apprentice sheet-metal worker when I was 16, and I had friends from there, in particular a guy named Eddie McManus, who advised me: ‘Get the hell out of here!’ ” 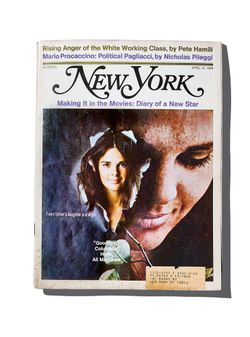 The Initial Response
You wouldn’t think the guys in this story come off well, but Hamill recalls that they felt so invisible in the media that they actually cheered its publication: “I think that it was raised or mentioned at all was unusual.” A letter the magazine ran a few issues later, from a reader named Robert J. King, bears that out. “Finally … someone has shown a modicum of understanding,” he wrote. “I am, I suppose, one of the ­middle-class whites that Mr. Hamill mentioned in his article, but I have nothing against the ordinary, decent black man. As Pete Hamill points out, he too is a victim of phony liberals … I have always loved my city and my neighborhood. I am, though, on the brink of quitting, and people like Lindsay have made this so.”

A lot of them did quit. In the 1970s, New York City lost 1.3 million white people, mostly to the suburbs and the Sun Belt. The Democratic machine ceded its grip on blue-collar white voters; the Republican Party scooped them up, telling them that less government would solve their problems. Never mind, as Hamill says, that the government itself had built their lives: “That’s what made the middle class! It was two things: the G.I. Bill and unions. And once they started busting the unions up — particularly an ex–union guy, Ronald Reagan, the turncoat champion of America, who had lived through the Depression thanks to the New Deal — the others were just left to flounder for themselves.” In the 1980 election, Reagan won New York State by three points and came within 18,000 votes of taking Queens.

Today
A few things besides the unabashed use of the N-word leap off the page in Hamill’s portrait of these future Reagan Democrats. He noticed that their reasons for backing a mouthy Brooklyn assemblyman named Vito Battista amounted to, in one guy’s words, “I like that Battista. He talks our language. That Lindsay sounds like a college professor.” (Remember Sarah Palin: “We need a commander-in-chief, not a constitutional-law professor lecturing us from a lectern.”) And Hamill also caught something else: that these folks watched a lot of TV, and that television’s “preference for the politics of theatre” had begun to skew their views of the larger world sharply. The Apprentice fired its first contestant in 2004.

*This article appears in the March 21, 2016 issue of New York Magazine.

+Comments Leave a Comment
The Trump Voter, Before Trump