Let’s face facts: Most animal livestreams are trash. There’s nothing especially compelling about depressed pandas sleeping in the corner of an enclosure, or goats quietly munching on pellets. But somehow, despite the genre’s limitations, the American Eagle Foundation’s bald-eagle nest cam has been really doing it for me this week.

The feed tracks the nest of two American bald eagles, Mr. President and the First Lady, who live at the top of a tree in the U.S. National Arboretum in Washington, D.C., and it’s riveting for two big reasons:

1. There are eggs that can hatch at any moment, and …
2. Mr. President is an unabashed shithead.

That first point is pretty self-explanatory. One egg hatched Wednesday night and yielded a very spooky little bb who can’t stand or open its eyes yet, but the second egg is still yet to start. On its website, the American Eagle Foundation asks everyone to tweet hatch-date and time predictions using #dceaglecam, but the hashtag is just an all-purpose live chat for feed-hounds in a really beautiful way.

The most common culprits are teachers using the stream as a learning tool:

Such an exciting morning! We got to see a fresh catch of fish and watch the eaglet hatch! 🐣 #dceaglecam pic.twitter.com/4M4QZqWKqZ

Or people keeping it on while they’re at work:

At a breakfast meeting with a client who confesses he is also obsessed with the #dceaglecam, so naturally: pic.twitter.com/rlQ41oZLkG

But just as important, people are in there treating it like reality TV:

It’s the latter group that I subscribe to. Here, we have a young female lead in the prime of her sexuality, 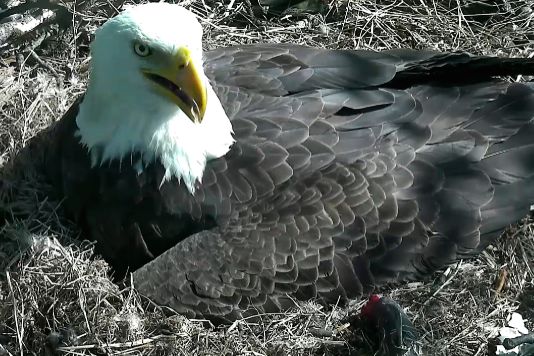 beholden to her hideous child and her temperature-sensitive egg, 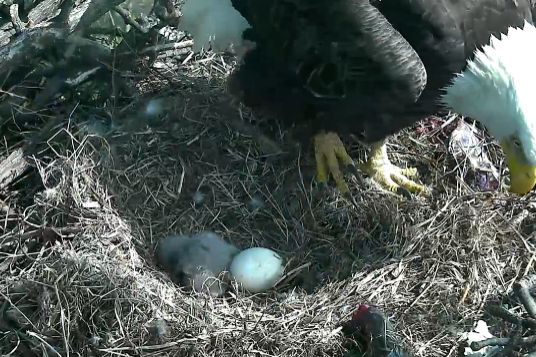 and a doofy male counterpart who’s largely absent from their immaculate nest-home except for when he’s stirring shit up. 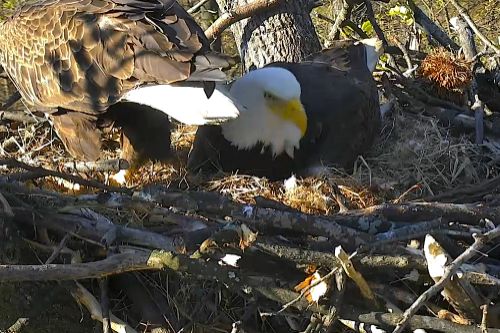 About 98 percent of the feed is just the First Lady sitting in the center of the nest, eyes alert, head turning at every sound she hears. 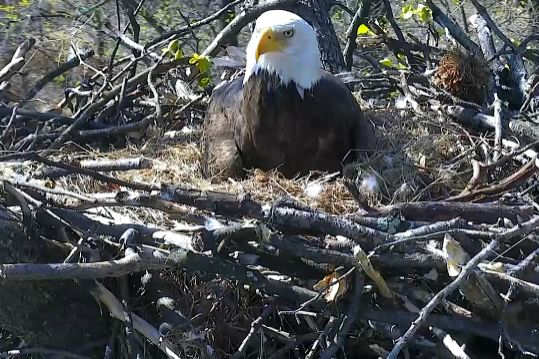 On the rare occasions Mr. President does show up, he stands at the lip of the nest and does nothing. A couple minutes later, he flies away. 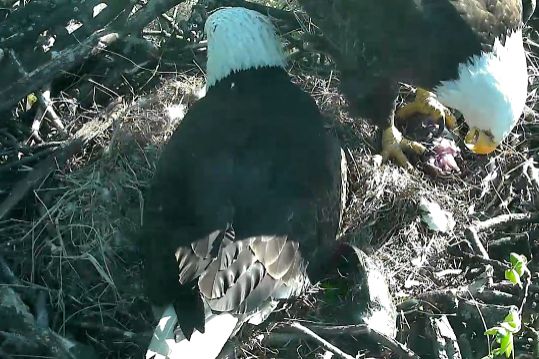 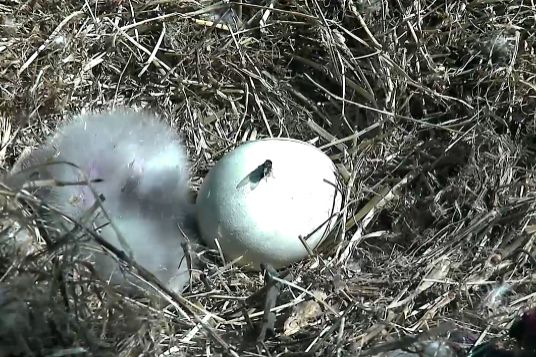 This morning, he dumped a ton of live catfish into the nest and then ate them all.

The chunk he left for the First Lady hasn’t been touched, and it’s attracting flies. Thanks, babe.

This Live Eagle Cam Was the Best Thing All Week

THE FEED
20 mins ago
what we know
what we know
Trump Says the FBI Raided Mar-a-Lago and Broke Into His Safe
By Intelligencer Staff
Federal agents were searching for evidence that Trump has classified information that he took home from the White House.
5:22 p.m.
unsolved mysteries
unsolved mysteries
The Bodies Keep Piling Up at Lake Mead
By Chas Danner
Four sets of human remains have now been discovered in the rapidly receding reservoir since May.
4:38 p.m.
early and often
early and often
Will Democrats’ Sudden Legislative Success Matter in the Midterms?
By Ed Kilgore
With the passage of the Inflation Reduction Act and gas prices dropping, Democrats’ odds of success in November’s elections are looking up.

2:51 p.m.
early and often
early and often
Photos of Trump Notes in Toilet Were Better Left to the Imagination
By Margaret Hartmann
Reporters were so preoccupied with whether they could find these pictures that they didn’t stop to think if they should.
2:20 p.m.
crime
crime
Police Have a Lead in Killings of Muslim Men in Albuquerque
By Benjamin Hart
At least three Muslim immigrants have been ambushed and killed in recent weeks, terrifying the local community.
11:15 a.m.
early and often
early and often
The GOP Is the Party of Insulin-Gouging
By Ross Barkan
In their quest for zero-sum victories — and Democratic defeats — Republicans are incapable of tackling popular issues that would benefit them.
11:00 a.m.
the city politic
the city politic
Carlina Rivera on What Democrats Get Wrong About Latino Voters
By Nia Prater
A daughter of the Lower East Side runs to represent the district where she grew up.
10:59 a.m.
early and often
early and often
Senate Democrats Finally Get Their Big Climate, Health Care, and Tax Bill Done
By Chas Danner
An overview of what’s in the Inflation Reduction Act and what last-minute changes were made.
10:00 a.m.
2022 midterms
2022 midterms
The GOP’s Glut of Rookie Candidates Could Mean Lots of Costly Mistakes
By Ed Kilgore
Experience in politics isn’t everything. But the GOP’s unusually large number of first-time candidates could mean midterms trouble down the road.
9:00 a.m.
early and often
early and often
The Biden Age Is Hitting Its Stride
By Errol Louis
The debate over how old the president is and whether he should run again is a distraction from how much he has already accomplished.
8:00 a.m.
what is elon musk?
what is elon musk?
What Is Elon Musk?
By Lane Brown
And how is it possible that he could emerge from his Twitter debacle more culturally dominant than ever?
8/7/2022
plagued
plagued
What Is Going on With America’s COVID Booster Plan?
By Chas Danner
The Biden administration wants to reboot the U.S. booster drive with reformulated vaccines this fall. Here’s what we know.
8/7/2022
early and often
early and often
Arizona Has Become a Paradise for Election Deniers
By Ed Kilgore
Promoters of Trump’s election fables swept four major statewide Republican primaries. The GOP could pay a price in November.
8/7/2022
early and often
early and often
All the Juicy Gossip From Jared Kushner’s Book
By Margaret Hartmann
Breaking History, the forthcoming memoir from the former First Son-in-Law/top Trump adviser, is brimming with dirt, jabs, and score settling.
8/5/2022
conspiracist series
conspiracist series
Sandy Hook Parents Awarded Another $45 Million of Alex Jones’s Money
By Matt Stieb
The Infowars founder has had an expensive week in court, and there are still two more trials to go against other Sandy Hook victims’ families.
8/5/2022
early and often
early and often
The Drama-Lover’s Guide to the New Trump Books
By Margaret Hartmann
Love gossip but not enough to actually read the new batch of Trump books? Here are all the juicy, disturbing, and darkly amusing tidbits you missed.
8/5/2022
the money game
the money game
Elon Musk Is ‘Sick of Stuff Like This’: 8 Takeaways to His Response to Twitter
By Kevin T. Dugan
The Tesla CEO has presented his response trying to get out of buying the company, but more questions linger over his chances of success.
8/5/2022
life after roe
life after roe
Kansas Shows the Potential Power of Pro-Choice Republican Voters
By Ed Kilgore
The Kansas abortion vote confirms that there are a significant number of pro-choice Republicans. Post Dobbs, they may get fed up with their party.
8/5/2022
inflation reduction act
inflation reduction act
Sinema’s ‘Yes’ on Budget Bill Gives Democrats New Momentum
By Ed Kilgore
After a year of angst, Manchin and Sinema have finally cut deals on the climate and economic bill. Now there are just a few final challenges.
8/5/2022
the money game
the money game
Twitter’s Legal Team Just Sucker Punched Elon Musk
By Kevin T. Dugan
The social-media platform launched a sneak attack against the guy it wants to buy the company.
8/5/2022
just asking questions
just asking questions
Will the Inflation Reduction Act Make the Carbon-Capture Business a Reality?
By Matt Stieb
A UC Irvine professor considers if the IRA’s proposed incentives could be a breakout moment for the nascent industry of sucking carbon out of the air.
8/5/2022
the inside game
the inside game
The Super-High-Stakes 2022 Race No One Is Talking About
By Gabriel Debenedetti
Charlie Crist has been Florida governor before. He thinks he can win again, toppling Ron DeSantis and sending the GOP into chaos in the process.
8/4/2022
sports
sports
Tuberville and Manchin Offer to Fix the College-Sports Money Mess
By Ed Kilgore
Federal legislation on player compensation is needed. But maybe the effort should be led by lawmakers who aren’t so closely aligned with coaches.
8/4/2022
conspiracy series
conspiracy series
The Alex Jones Trial Is As Messy As You’d Expect
By Matt Stieb
He was ordered to pay $4.1 million to a Sandy Hook victim’s parents after a trial that saw him surprised by the revelation of his own texts.
8/4/2022
2022 midterms
2022 midterms
Kris Kobach Is Making Yet Another Comeback Attempt
By Ed Kilgore
The veteran nativist and vote suppresser is running for Kansas attorney general, despite failed U.S. Senate and gubernatorial bids.