Ted Cruz, true to his paranoia, has charged that mainstream news outlets are sitting on a series of explosive reports about Donald Trump’s history, planning — as a nefarious plot to help Hillary Clinton — to unleash them only after Trump has secured the nomination. The accusation is almost certainly false. (“Almost” being a necessary qualifier, since one can’t prove a negative.) At the same time, Cruz’s charge reflects a broader truth. There are cutting charges that might sever Trump from his loyal base that have not seen the light of day. The thing is, Cruz and his fellow anti-Trump conservatives are perfectly aware of what they are. They have chosen to holster those attacks for reasons entirely their own.

Conservative Pundit: Obamacare May Destroy GOP
Rubio: Trump Is a Dangerous Con Man, and He’ll Have My Vote
Why, Exactly, Is Trump Driving Conservatives So Crazy?

The Republican assault against Trump, pounded home in attack ads and in speeches by figures like Marco Rubio and Mitt Romney, depicts him as an unreliable champion of the working-class voters who have rallied to him. Trump, his critics accurately say, is a con man. His “Trump University” defrauded its customers. He used eminent-domain laws to kick old ladies out of their houses. “His bankruptcies have crushed small businesses and the men and women who worked for them,” as Romney pointed out.

These points are all true. On the other hand, Trump has a ready answer that deflects most of the damage. “My whole life I’ve been greedy, greedy, greedy,” he has said. “I’ve grabbed all the money I could get. I’m so greedy. But now I want to be greedy for the United States.” The accusation against Trump flows right into his own message. Trump’s enemies call him a lying, cheating bastard, and Trump assures his supporters that he wants to be their lying, cheating bastard. 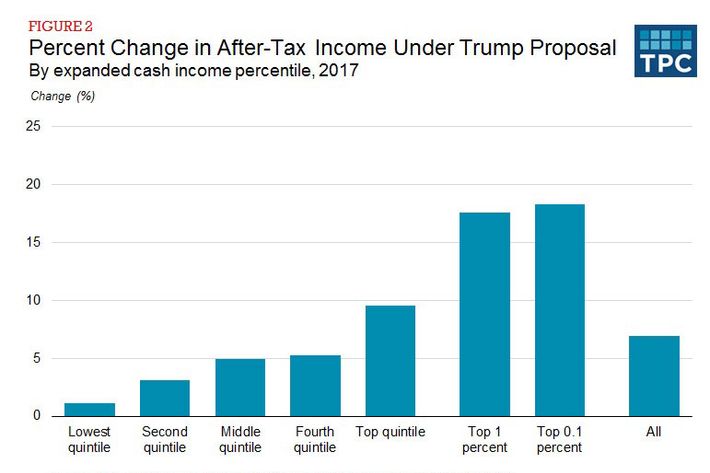 Trump has claimed that his tax cut would raise taxes on the rich. And survey data shows he draws heaviest support from the large segment of Republican voters who favor raising taxes on the rich. So pointing out that Trump’s plan would do the opposite of what he promises, and what his supporters crave, would make for a devastating attack.

Alas, the Republican Party is institutionally committed to reducing the tax burden on the affluent as its overriding policy imperative. The party apparatus works as a kind of cartel dedicated to ensuring that all candidates support this goal, and Trump has joined it. Trump’s competitors can’t figure out a way to point out that Trump’s most important promise is a lie without blowing up a larger fiction in which they are complicit. Hillary Clinton won’t be so constrained.