Finding somebody to have lunch with in 2016 can be a challenge. These days, there are just so few options for communicating with other humans and nailing down meal plans. Right? Right.

Enter Down to Lunch, an app that launched in 2015 and has since grown in popularity thanks to college students across the country — and to its aggressive, gamified invite strategy. On Friday, DTL edged out Facebook’s Messenger app for the third spot in the free category of the Apple App Store, as first noted by Business Insider.

The app, which creators Joseph Lau and Nikil Viswanathan built in a single One Direction–fueled afternoon, is extremely simple to use, just like, uh, texting. It connects to your phone contacts and notifies your friends in the area that you’re “down to lunch.” If anyone responds with interest, you can then use the app to chat and firm up plans. (Student users can also select a school to help find classmates using the app.) 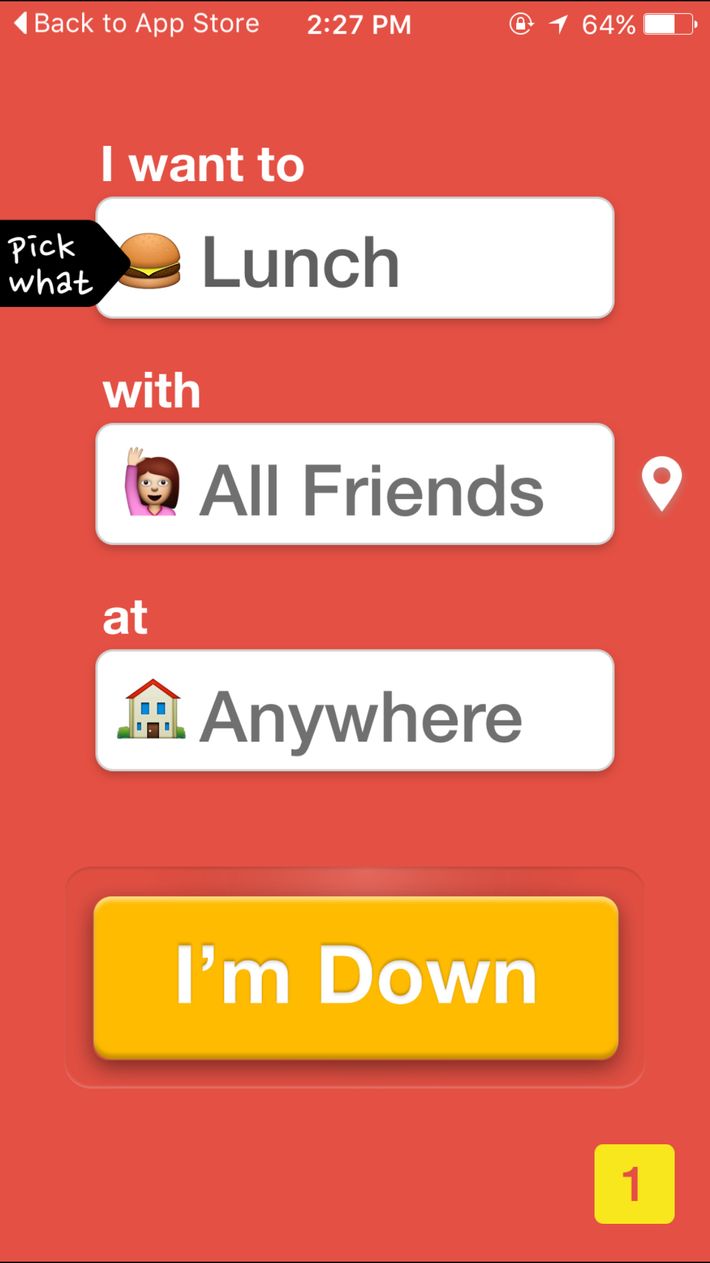 It’s not limited to just grabbing a noontime nosh. Other choices include “Breakfast,” “Ball,” “Gym,” and, every millennial’s favorite pastime, “Chill.” Down to Lunch also offers a few less-PG options, like “Blaze” and “Beer Pong,” but — unfortunately for the loner beer-pong enthusiast — those are only open to users who have a set number of friends using the app.

It’s a pretty brilliant strategy. If you’re hoping to use DTL to find some pals to blaze up with on 4/20, you’ll need to recruit 50 people to download the app before then.

On the other end, the “Church” option doesn’t have any requirements, so hit up your good pal Hozier and go to town. 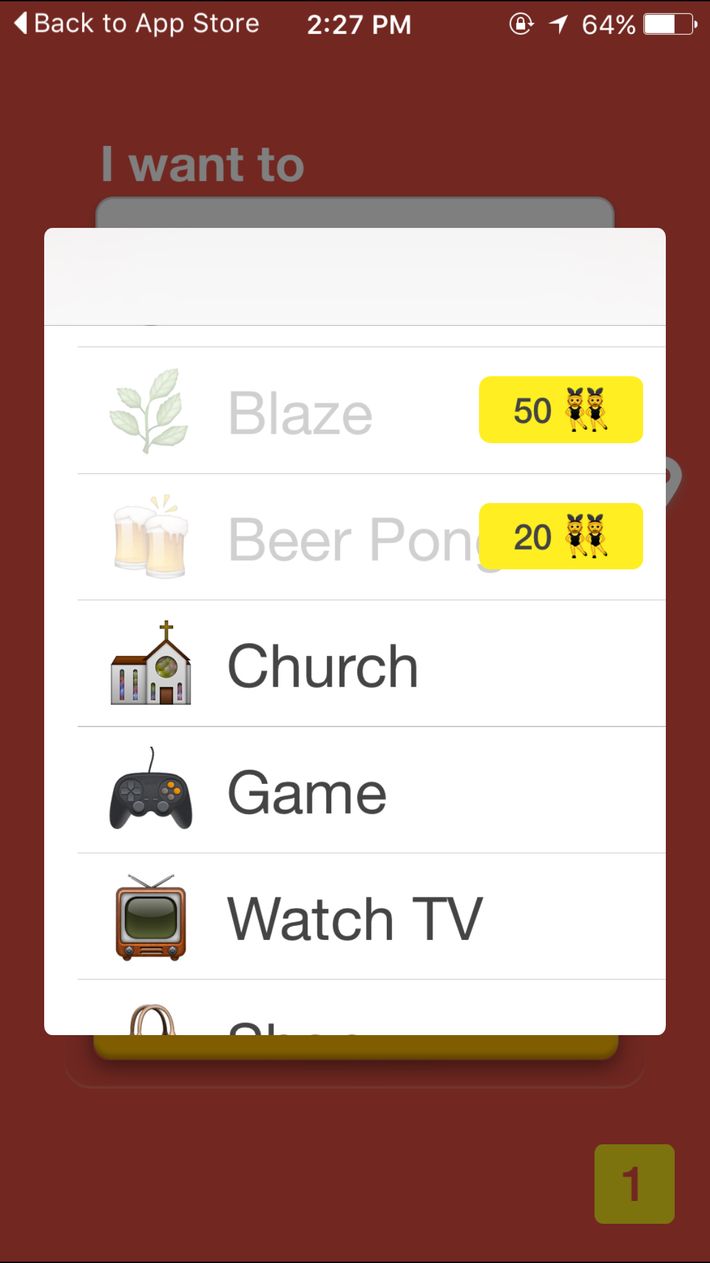 Teens and college kids clearly love Down to Lunch — otherwise it wouldn’t be so popular. But it’s not just its weirdly passive and spammy approach to communication that’s making it a hit. Down to Lunch’s pushy invite tactics (nearly every screen on the app puts you one button away from texting your address book to join the app) are likely the biggest reason it’s climbed the app charts so quickly. Need more proof? Down to Lunch has also already started to piss some people off, a sure sign of an aggressive growth strategy.

Take a look. A quick Twitter search for “Down to Lunch” yields plenty of people overwhelmed by invitations to join the app. If you remember the Farmville game notifications that plagued Facebook during the early aughts, these complaints might feel a little familiar.

Can you guys stop inviting me to down to lunch

If I get one more text about this Down to Lunch app, I'm going to personally make sure that you all choke on your lunch

When I downloaded DTL, the app also prompted me to invite people to join from my contacts, based on the number of friends they’d have if they joined. Suggestions included my former boss and the CMO of a popular tech start-up.

For now I think I’ll be sticking with text-messaging my lunch plans or just eating a sad desk salad.

Are You Down With Down to Lunch?

THE FEED
18 mins ago
the sports section
the sports section
Uh-oh, Jim Dolan Found a New Team to Meddle With
By Joe DeLessio
The widely reviled Knicks owner had mostly left his hockey club alone. Not anymore.
11:49 a.m.
politics
politics
DeSantis Signs Voting Restrictions Into Law in Fox News ‘Exclusive’
By Nia Prater
The Florida governor turned the enactment of yet another restrictive Republican voting measure into a segment on Fox & Friends.
11:45 a.m.
politics
politics
New Survey Finds Republicans More Eager to Get Vaccinated
By Paola Rosa-Aquino
Enthusiasm has plateaued, but there are positive developments in the rush to inoculate the country, according to the Kaiser Family Foundation.

Jobless claims notch fourth straight week of pandemic lows
—Washington Post
7:00 a.m.
just asking questions
just asking questions
Suzanne Simard Changed How the World Sees Trees
By Robert Moor
The pathbreaking ecologist on what she’s learned about interspecies collaboration, tree sentience, and nature’s resilience.
5/5/2021
nyc mayoral race
nyc mayoral race
Working Families Party Issues Dual Endorsement of Maya Wiley and Dianne Morales
By Matt Stieb
The progressive group’s co-sign — revoked from Stringer following a groping allegation — could help the candidates gain much-needed momentum.
5/5/2021
the national interest
the national interest
Liz Cheney Wants to Save American Democracy From Trump’s Next Coup
By Jonathan Chait
A Republican who seems to have read How Democracies Die.
5/5/2021
coronavirus vaccine
coronavirus vaccine
U.S. Supports WTO Plan to Lift Vaccine Patent Protections
By Matt Stieb
The Biden administration will now encourage other countries to agree to a WTO measure waiving IP protections for the vaccines.
5/5/2021
crime
crime
What Happens Next After the Derek Chauvin Verdict
By Nia Prater
Derek Chauvin’s attorney has filed a motion for a new trial, and many other legal issues remain unresolved.
5/5/2021
babies
babies
No Country for New Babies
By Eric Levitz
In 2020, the U.S. birth rate declined by 4 percent, bringing the nation’s fertility to its lowest point in over a century.
5/5/2021
covid-19
covid-19
How Far Along Is New York City in Its Reopening This Spring?
By Matt Stieb and Paola Rosa-Aquino
Citi Field and Yankee Stadium will have separate sections for vaccinated and unvaccinated fans, and people can get J&J shots at the ballpark.
5/5/2021

5/4/2021
Republicans Are Purging Liz Cheney for Opposing Trump’s Insurrection
By Jonathan Chait
5/5/2021
american rescue plan
american rescue plan
Ideology Is Still at Heart of the Red-State Refusal to Expand Medicaid
By Ed Kilgore
Twelve states still refuse generous Medicaid expansion incentives. The excuse that it’s about money no longer applies, thanks to the latest stimulus.
5/4/2021
dogecoin
dogecoin
Dogecoin Is Surging Again, and for Some Actual Reasons
By Chas Danner
Two more trading exchanges have embraced the crypto, Elon “Dogefather” Musk is about to host SNL, and there’s some seller’s remorse too.
5/4/2021
the city politic
the city politic
Will Scott Stringer’s Troubles Shake Up the Mayor’s Race?
By David Freedlander
Staffers for other campaigns are gaming out who may be helped by a collapse in support for Stringer, who faces allegations of sexual misconduct.
5/4/2021
from the desk of donald j. trump
from the desk of donald j. trump
Trump Launches Sad Twitter Just for Him
By Matt Stieb
Trump debuted a new page on his website that he’s calling “a beacon of freedom,” but it’s basically just a social-media network for one.
5/4/2021
redistricting
redistricting
State-Legislative Redistricting Is a Big Deal, Too
By Ed Kilgore
While most people focus on congressional redistricting, the state-legislative-redistricting process is where Republicans may perpetuate their power.
5/4/2021
crime
crime
Asian Woman Told to ‘Take Off Your Mask,’ Attacked With Hammer in NYC
By Nia Prater
A 31-year-old recent FIT graduate was attacked by a stranger while walking with a friend in Hell’s Kitchen on Sunday. The suspect is still at large.
5/4/2021
nyc mayoral race
nyc mayoral race
All the Endorsements in the NYC Mayoral Race
By Nia Prater
With the June 22 primary approaching, Democratic mayoral candidates are racking up endorsements from politicians, organizations, and celebrities.
5/4/2021
the national interest
the national interest
Republicans Are Purging Liz Cheney for Opposing Trump’s Insurrection
By Jonathan Chait
The anti-Trump revolt ended, and now the Trumpists are shooting the prisoners.
5/4/2021
gavin newsom recall
gavin newsom recall
California Democrats Debate Anti-Recall Strategy
By Ed Kilgore
For the moment, Democrats will continue to treat the recall effort as MAGA partisanship disguised as concern over Newsom’s policies and conduct.