Oleg Cricket is a man with a dream.

“I was born in a small city in Siberia. I grew up in a loving family with caring mother and awesome father, being a little boy with ambitions and a dream which only I believed in,” the Russian-born stuntman explains on his website, which greets visitors with a charming motivational quote from Mark Twain and a nondescript hip-hop tune that plays until you finally rip out your headphones.

Now, after seeing this video of Cricket riding a hoverboard atop a skyscraper in Dubai, we’re pretty sure we know exactly what that dream is. 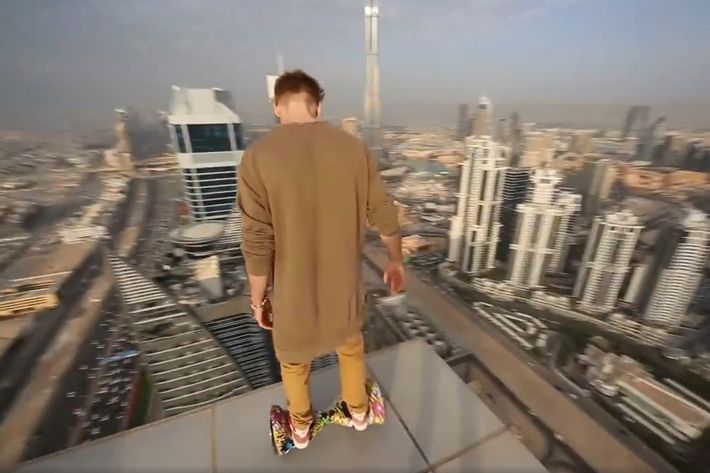 Take a look. Cricket performed the stunt earlier this month, but the video is just now making the rounds on Facebook after being picked up by the LAD Bible, where it has been viewed over 3,000,000 times.

“scENE fROM My fULL vIDEO, HOW AM I sTILL ALIvE? I DON’T KNOW, MAyBE I’M IMMORTAL?,” Cricket very coherently captioned his video on Instagram. He also included three hashtags: #NoPhotoShop, #OlegCricket, and #KanyeWest. Well, there you have it. Cricket’s childhood dream was to scare the ever-loving shit out of us.

Do Not Watch This Terrifying Hoverboard Video