There’s this amazingly uncomfortable thing that happened throughout American Crime Story: The People vs. O.J. Simpson. You know how the story ends, you’re aware of all the things the prosecution did to mess up, but you still find yourself wanting to reach through the television and save someone from making a massive, “Juice”-freeing mistake. You know damn well that glove won’t fit — so for a moment you simply want to pause time and have a quick sit-down with Darden — Come on, man, please don’t make him put that glove on, I promise you it’s not going to work.

But you can’t stop time. So real life happens. And, as they say, the rest is history.

That happened in real life yesterday, as this presidential election finally turned into an episode of ComicView, in the form of the annual Inner Circle production, an annual roast of sorts (much like the White House Correspondents’ Dinner) between the media and those in politics, at the New York Hilton. At a certain point, Mayor Bill de Blasio took the stage with Leslie Odom Jr., dressed as his character Aaron Burr from the musical Hamilton, and soon after the two were joined by presidential candidate Hillary Clinton. You know, just a normal Sunday with the Schermerhorn Sisters.

I’m so giddy to tell you what happened next, I can barely type.

To set the scene, the mayor is finally endorsing Hillary, and she uses the opportunity to make a little jab about how late he was, much to the delight of the crowd.

Clinton says, “Thanks for the endorsement, Bill. Took you long enough,” followed by an off-camera “Oh snap” from Odom. So far, so good — this bit is actually working. But now it’s Bill’s turn to deliver some comedy gold.

What’s on your mind, Bill. SAY IT FROM YOUR CHEST. 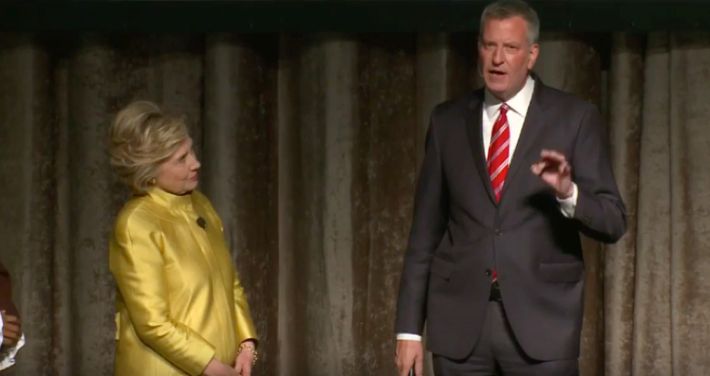 This is the moment when you want to freeze time. Something’s off, and it’s worrisome. Bill is about to do a joke — and you want to ask him, “Bill, have you asked people about this joke yet? Has this joke been cleared? If so, who gave the green light? Does your wife, Chirlane, know about this joke? Wait — no, you aren’t going to do the joke about … oh no.”

No, Bill. You can’t. There is no way you’re about to overly enunciate this not-great joke while gesticulating every word as if you’re typing out emoji handclaps. Oh no, please someone stop this man before it’s too—

“I was running on CP time.”

I take back what I said earlier. This is nothing like Darden. I thought I wanted to save Bill, until I actually heard him say it, followed by the room releasing a collective “Oh no” sigh. To be clear, the sigh was not an “Oh shit, Bill went there — that’s my nigga Bill, he’s got the juice now.” It was definitely more along the lines of “God dammit, white people,” with a pinch of “Oh, so this is how y’all talk about us when we aren’t around.”

But the bit is not even over. Following this, Odom says: “I don’t like jokes like that, Bill.”

When the reports of this story began to circulate, Odom’s line was widely seen as proof that he was genuinely upset. Reading the first reports, my initial reaction was that Odom was even cooler than I thought, by not letting that bad joke slide.

But no. This was all part of the bit. And then Hillary got involved. Looking confused, Secretary Clinton looks out and says, “Cautious politician time?” And yes, this was also reported by some to seem as if Clinton saved de Blasio (in real life) from his terrible blunder. But no — again — still part of a bit. An amazingly unfunny, terribly executed one, yes, but still part of a bit.

It finally all came to a close, with Odom nodding as if to suggest he understands what the mayor truly meant by CP time.

What an amazing 33 seconds this is, both the actions and the reactions. As soon as they made it all the way through the bit, there’s this split second where all three look out, almost to assess the success and/or damage. To my untrained eye, de Blasio and Clinton are like, “Nailed it,” while Odom is like, “Shit, why did I sign up for this? I feel like Darden when I see me in the news.” 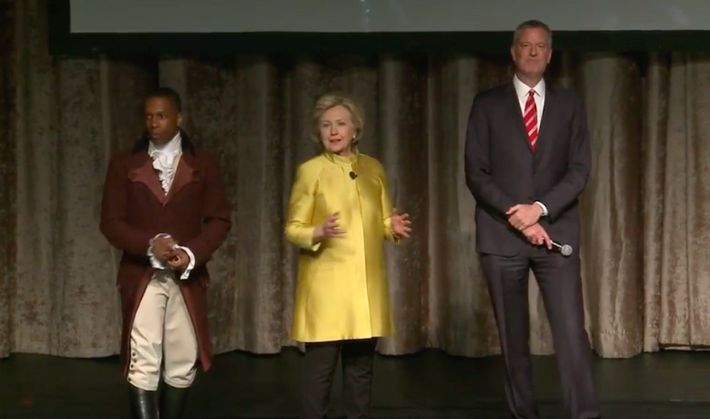 So what’s the response to this been? It’s been reported very little — probably because most political reporters don’t know what “CP time” is. But the #FeelTheBurn crowd is calling it racist, because if there’s one thing a wildly passionate white Bernie supporter is good at, it’s claiming that a pro-Clinton white is a worse white. And then there’s Team Hillary, who will hope few people notice that she participated in a colored people time joke only weeks after taking the stage at the televised BET Black Girls Rock! show.

This is the best election ever. I can’t get enough of it. As for de Blasio, hate it had to be you. I kept pausing it before he said it, because I knew it would land as well as O.J.’s glove fit. But unlike those Darden moments — ones in which he would stumble and I’d get sad — when I finally braced myself to hear de Blasio say “CP time,” I nearly broke into tears laughing. The comedy isn’t in the joke — it’s in watching someone stumble so hard. 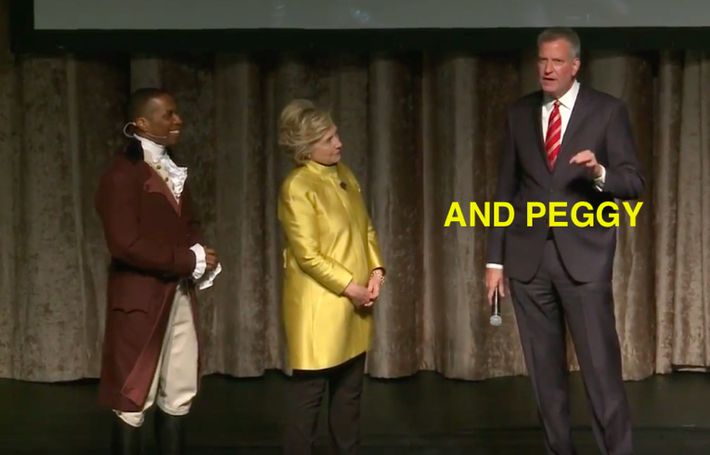 The mayor played himself. It’s incredible. Watch it over and over again. Seriously, de Blasio getting too comfortable is the gift that keeps on giving. Watch it on loop. Forever.

Oh, laughter, you truly are the great temporary cure for sadness.

This is the worst election ever.